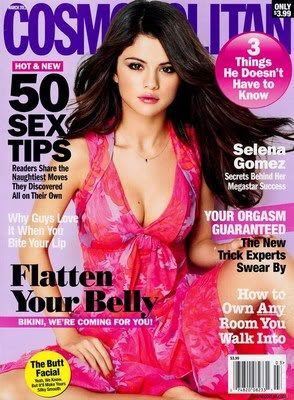 Lavender cover!  Selena Gomez!  Her left leg is growing out of the side of her abdomen!  "Why guys love it when you bite your lip!" "Because it is a widely understood gesture indicating sexual interest in our culture" is probably not the answer!  "3 things he doesn't have to know!" Hm...

I sure hope it's stuff like that, because wow, these are things nobody ever has to know! "How to own any room you walk into!" ...Buy a house and never leave?


Letting him take the lead: It may seem a little retro, but the simple act of allowing your guy to forge a path for the two of you can do wonders for his ego and your relationship.  [...] So throw the guy a bone and let him grab your hand and guide you the next time you're walking down a crowded street.

"Retro" is the wrong word here.  May I suggest "dehumanizing" or "infantilizing" or a good ol'-fashioned "bullshit"? But what's really getting me here is the "throw him a bone" thing.  Like, yeah, we're totally all feminists and we understand equality now... but be a sweetie and let him degrade you a little sometimes!  I mean, sure you're as much of a capable adult as he is, but you don't have to rub his nose in it!

I'd be less Humorless Meaniepants about this if it said "sometimes it's nice if one of you lets the other take charge and lead."  It did not say that.


I am a nursing assistant and work with a hot male nurse. One day, he asked if I could help him clean up an empty room. But it turns out he just wanted to hook up, so we locked the door and started going at it.

So... your direct supervisor asked you to go to an empty room with him on false pretenses and then he locked the door?  ...Are you okay?  Do you need to talk?  Do you want me to call someone?

The worst part is that this is a part of a transparently fake "true confession" story, which means that someone made this up thinking it would be sexy, when they could have just as easily made up a story that didn't have terrifying implications.


The lip bite brings out his inner caveman. Why? It causes blood to rush to your lips, which plumps and reddens your pout. Both are signs of fertility, and when a guy sees them, it sets off his primitive instinct, since he's subconsciously looking for a mate with whom he can reproduce.

"Caveman" bullshit aside, this doesn't even work.  I've been biting my lips in the mirror for the last couple minutes, and unless I chomp down so hard it hurts, my lips look exactly the same afterwards.  My teeth aren't bees.

This isn't a difficult thing to test, Cosmo.


Men love when you beg them to finish.  In a sweet, sexy voice, say, "Please come, baby, please come."

Oh God, I used to do this.  I was dating a guy who took forever and when it stopped being fun-forever and started being ow-forever, I'd do this to try to make it end.  Sometimes it worked, sometimes it just prolonged the "but I'm almost there!"  The whole situation was as sexy as a root canal.

Now I have a partner I can just say "I'm getting sore" to, and even though that doesn't sound sexy, it beats the hell out of "dirty" talk that really means "oh for the love of God why can't this be over already."

So that's just my personal associations with "please come, baby."  Maybe it's great for someone else.


Try this kinky trick: Color your nipples with a crazy-colored lipstick, like sparkly purple. Bonus points if it's yummy. He'll love the shocking, sexy change in scenery!

Man, I love Showgirls on so many levels, I think it's the unheralded companion piece to Starship Troopers... but absolutely nothing in that movie should ever be attempted by anyone.


"My guy and I will be at lunch and I'll say things like 'Yes, master,' and 'Whatever you say, sir.' He gets the hint that it's time to tell me what to do.  It's a huge turn-on, and the sex later is super passionate because of it.

I don't disapprove of this quote at all.  I just want to slip the person who wrote it a few phone numbers.  It's okay!  You are not alone!  We have meetings Tuesdays and Sundays!


[Jewelry ad: an elaborate diamond and white-gold pendant, and two matching cocktail rings, lying on a wood surface.  Next to them, a note tied to one of the rings reads:] Girls' night out just got cancelled.

You ever get that feeling where you don't know exactly why something is wrong... you just know that it is?


"In the early stages, subtlety is key," says Nicholas Boothman, author of How to Make Someone Fall in Love With You in 90 Minutes or Less.  "It sounds old-fashioned, but guys want to feel like they have to chase you a bit."

But if I bought a book called How to Make Someone Fall in Love With You in 90 Minutes or Less, I would ask for a brown paper bag.

Anyway, the problem with the whole "make him chase you" thing isn't just the passivity it imposes on women and the aggressiveness it requires of men.  It isn't just the risk for dangerous confusion between a woman playing hard to get and a woman trying to get away.  It's also how often I've tried to do this, tried to be super subtle about my attraction, tried to make a guy chase me... then looked behind and realized he wasn't following. I'd just plain run away from him.

Sex and love games are awesome.  But I prefer the kind where everyone knows they're playing.

Oh, and the three things he doesn't need to know? What you do when you're not with him, what skills you have, and what insecurities you have about your body.  Because if there's one thing your boyfriend doesn't need to know, it's that he's dating a person.
Posted by Cliff Pervocracy at 4:31 PM