I will be speaking on "How To Have Sex On Purpose" at the University of Pittsburgh Rainbow Alliance this Thursday (Sept. 26)!  Members of the public are welcome; the event will be at 8:45 PM in the Kurtzman room on the main floor of the William Pitt union, on the corner of Fifth Ave and Bigelow Blvd (4200 Fifth Ave).  If I have any Pittsburgh readers... come say hi!

We continue with FSoG where we left off--with Splint ChestHair acting like an insufferably self-satisfied stalker, and Ana acting like she needs Giles to run in and yell "she's under some sort of thought control spell!"

This is probably the last chapter of the book that does not require a major trigger warning.  (It does feature stalking and general creepiness, but nowhere near as bad as it's about to get.) 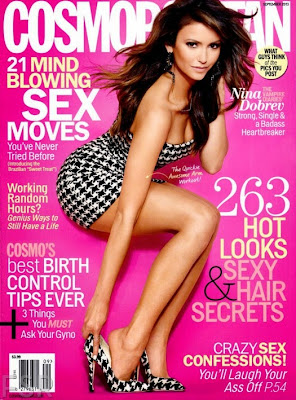 Pink cover!  Nina Dobrev!  Which is odd because the main interview/profile (which is almost always the person on the cover) is with Rebel Wilson!  I guess they didn't think Rebel Wilson was cover material because she's clearly too fat to be glamorous!  "Mind Blowing Sex Moves You've Never Tried Before!" God, I hope they really are, because that means they'll be hilarious! I can't work with Cosmo when they just do shit like "amazing newly-discovered sex secret: touch his penis!"


During sex, she asked me if I would say "Parsons," which is where she went to college.  I thought it was weird, but because I was drunk, I went with it. Then she asked me to say "Park the car in the Harvard Yard"--she said my Boston accent turned her on!  So I continued to say random sentences for her.

The sex must've been pretty damn good, because most Bostonians will flip you off if you start "PAAHHHK THE CAHHHH"ing at them.

(Then again, I'm a hypocrite, because I still think it's funny to make Rowdy say "roof" and "bag." Not in bed though.  Although I did once sleep with a different guy from the Upper Midwest and he said "ooh jeez, ooh jeez, OOOH JEEZ" the whole time.  This has nothing to do with Cosmo. I just really wanted to tell that story.)


Take some sexy fabric with you when you two travel together, and use it to make a normal hotel look like a love motel.

Sexy... fabric?  If this were about sexy sheets, I'd sort of get that. But it's not sheets.  You just bring some, like, red satin with you and tack it up to the headboard. Okay.

Man, and some people think condoms interrupt the spontaneity of sex.  I hope they end up with partners who want to stop to reupholster the room first.


Q: Sex with my boyfriend has become meh. How can I talk to him about improving it

A: Having a serious conversation can be overkill. Take action instead.

Yeah, because if you talked about this, it would be a challenge you had to work on together!  But this way, it's something he can be oblivious to while you bust your ass trying to "spice things up"!  Of course, there is the slight drawback that if there's an actual reason your sex life has changed, you're never going to know it; you'll just grow gradually more resentful that he isn't responding to your efforts.  But that's a small price to pay for not having to take the massive, drastic step of communicating with your partner.


Q: I was having sex with a guy I've been hooking up with, and he said to me, "I don't want you doing this with anyone else."  Is he asking me to be exclusive? 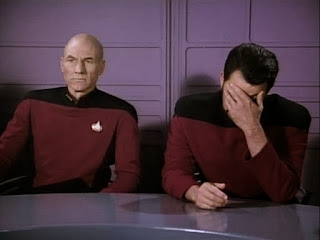 Yes. Yes, that is what those words mean.

Although he's not offering to be exclusive himself, so unless you have a well-negotiated intentionally asymmetrical relationship, and I can absolutely guarantee you do not, he's being kind of a double-standardy asshole.


Q: My fiancé is sensitive to my needs and always makes sure I have an orgasm. But sometimes, I wish he would just push me down and have his way with me. He was like this once, after we went out and had a few drinks, and it was amazing. How do I get him to do that again

A: Uh, was that the only time the two of your ever got drunk together?  Because it sounds like getting drunk together worked pretty well. Whether you're drinking or not, I'd recommend going out wearing a hot dress or skirt and whispering to him at some point that you're not wearing any underwear. It'll build up his anticipation until it explodes back home.  You can also, you know, tell him what you want.

So, basically you should try and entice him to attack you, as men are compelled to do to women in sexy clothing who are drunk.  Gahhh.

I do like that Cosmo finally raises the possibility of communicating, though. Maybe they should have put that before the "drive his animal side so wild that he'll want to hurt you and have no idea you're actually enjoying it!"


the Footsie Roll: Place the condom securely on the tip with your hands, then lean back and balance on your forearms. Place your feet on either side of his penis, and gently roll the condom down with your big toes.

This is going to go down really, really differently depending on how he feels about feet. You might want to check on that first.


[on women's dating profile pictures] The World Traveler: On a camel, on the top of a mountain, on a beach, on a boat... I admire the adventurous spirit, but will I ever be able to keep up with her?  Is she ever at home?  What's she running away from--him?

Women who take vacations: clearly fleeing a dark past.  You heard it here first, folks.


[a Zales jewelry ad] All of the carats. None of the calories.

[Apparently this is how I procrastinate Cosmocking now. Darnit. It is coming, I swear.]

We continue where we left off: with a heroine defined by awkward babbling and a hero defined by being Dracula.


Alright, I should have done this years ago, but since the meme is still not dead, I think it's not too late.

I'm reading Fifty Shades of Grey.  I'm going to write this as I read it, rather than finishing and going to the end, so you're getting my first reaction here.  I'm also going to put this all behind pagebreaks, so I can go on as long as I like and not shit up my main blog with glorified Twilight fanwank.

Let's begin. God have mercy on our souls. 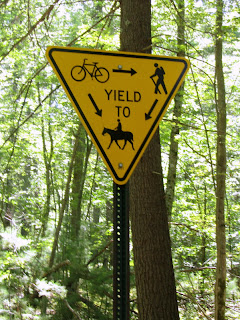 The first time I touched a penis, I was amazed: it's just skin!  It didn't feel all that different from the skin anywhere else on his body.  I'd been expecting... I don't know what I was expecting. Something exotic, something totally new and different and dirty and scary and strange.  Like maybe it would feel like a squid, or be electrified, or cause the world to tastefully fade to a view of fluttering curtains.

Because it was a sex thing, and everything I had learned in life up to that point had primed me with the idea that sex things are nothing like ordinary thing things.  Sex ed was always set apart from ordinary life skills teaching.  Sex movies were special secret movies I wasn't supposed to see.  Sex wasn't just a taboo; it was a mystery, an esoteric alternate dimension where people became their animalistic sex-selves.

But there I was, touching a penis, and it turned out to be completely continuous with the rest of his body.  It was just a part of him.  And the sex we had was just a part of life.  A fun part, sure--sometimes a magnificently, transcendently pleasurable part--but it did not take place in a different universe nor did it make us into different people.  The me who fucked until I was sweat-slick and screaming was the very same me who got up the next day and made my bed and went to class.  The line between "sex" and "life" had been a lie.

Sometimes people say "sex is a part of life" to mean "sex isn't a big deal."  I don't agree with that.  I think sex is a big deal--but only a big deal.  Not a magical mystical none-of-the-normal-rules-apply deal.

Which is to say: the normal rules do apply.  Everything you learned from Mister Rogers about how you treat other people--that's how you treat other people when you're fucking them, too.  It's simple stuff, mostly, and you don't need some Sex Expert to dispense Sex Wisdom to know it: Be honest. Ask permission before touching things that aren't yours. Be safe.  Don't bully or make fun of people.  Don't  throw tantrums when you don't get everything you want.  Keep your promises.  Use your words.  Brush your teeth.

Really, this is the whole foundation of my sexual ethics.  It's not Betty Dodson and it's not Susie Bright.  It's Fred McFeely Rogers.

"Is it okay to cheat on my partner if they won't have sex with me?"  Keep your promises.
"Are people who've had too much sex icky bad people?"  Don't bully or make fun of people.
"Is it okay to have sex with someone who's asleep, if they've had sex with me before?" Ask permission before touching things that aren't yours.
"What should I do if I want an open relationship?" Use your words.

I don't want to make this sound oversimplified--there are lots of questions where it's not immediately clear which option is "being honest" versus "throwing a tantrum", or what exactly constitutes a "promise"--but it's simple at the core of it.  Everything you know about how to be a decent person still applies when sex is involved.  You don't need to figure out (or more often, not figure out, but excuse your behavior by claiming they exist) special different Sex Rules for everything.  Sex isn't a special case in ethics. It's just a case.

The other night, a friend and I kidnapped a man. We blindfolded him and threw him in the back of a car and drove in circles to disorient him (or possibly because I forgot that you can't turn left at the end of White Street), marched him around in public and treated him as our captive, tackled him when he tried to escape, then took him home and interrogated him.  (Then we fed him cake.)