I know I start too many posts with excuses, so I'll just say: major family crisis which is still ongoing and will probably end badly.  (Oh god, I hate speaking in vague-ese.  Basically what I mean is my grandmother had a heart attack and is having major health and psychological crises on a daily basis, which I'm being repeatedly sucked into.)  Also I have various mental hangups about posting on this blog which are matched only by my mental hangups about not posting on it.  I'm working on those.

Anyway. Cosmocking is very overdue, so, without further ado... 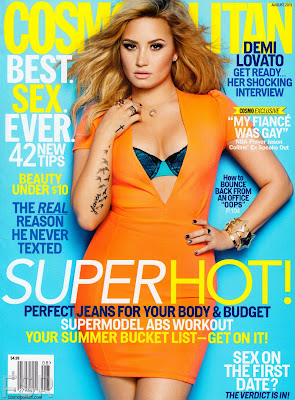 Blue cover!  They didn't tag this "the HOT issue," because Cosmo is getting all serious these days, but they haven't totally lost touch with their roots because they still snuck in a "SUPERHOT!" on the cover.  Demi Lovato!  I feel so old when I have no idea who the cover people are!  "Best. Sex. Ever. 42 New Tips!" The tips turn out to be things like talking dirty and using a blindfold and there's nothing wrong with that but wow that is some chutzpah calling them new! "The Real Reason He Never Texted!"  Generally I assume it's because he missed the message or procrastinated answering it and if I remind him he'll get in touch!  Because if it's anything else then I'd say I dodged a bullet!

Because I am a pedant (and I've eaten a few bugs in my day), I found the report they're talking about. It goes into depth about all the different ways people eat insects right now: caterpillars are popular in central Africa, crickets and beetles are snacks in Thailand, witchetty grub is a traditional food in Australia, ant larvae are a delicacy in Mexico... the question the UN is posing isn't "what if people ate insects?" but "why doesn't everyone eat insects?"

The answer, is, in part: because Westerners think it's icky and suppress insect-based culinary traditions, even when doing so leads to widespread malnutrition (PDF link).  Turns out that going "ewww FAIL" at important protein sources is not, in fact, sound global food policy.


So You Want To Be A Princess: Grown, professional women are sporting glass slippers, spending thousands on a Cinderella wedding, and holding out for Prince Charming. What the frock is going on?

This is a really weird trend piece.  It's almost up to New York Times levels of "taking a trend that basically no one is involved in, acting like it's sweeping the country, than judging all the people who are supposedly involved."  I'm just going to give you some amazing quotes from this piece and let them stand on their own merits here.


The professional princess doesn't claw her way up the ladder. She ascends through the ranks by employing kindness, courtesy, and charm, leaving everyone with whom she has worked sinking her praises.

Driving around in her pink car, texting on her pink iPhone, and still planning her Little Mermaid wedding, she waits for the man who will open doors for her, buy her flowers every day, and know her favorite song--"not because he has to but because he wants to."

"It's a form of insanity," Orenstein says. "Why can't they emulate queens?"

Not having to be in charge is the point of princess culture, adds Rebecca Hains, Ph.D, author of Confronting Cinderella. "These women are saying they want it all but in a way that doesn't involve the work and does involve the sparkle and glamour. [...] Women are being joyously duped."

Their definitions of what a princess is have become intensely personal.

For her at least, being a princess is not about being self-absorbed, materialistic, or rescued by a man. "I know it's silly," she says. "But there was such female bonding and empowerment out there. The women weren't like, 'Hey, move, you're in my way.' They were like 'Hey, I like your tutu."

At least it's not "hookup culture."

...Okay, five bucks to anyone who finds me a trend piece on "princess hookup culture."


"Our life feels like it's turned into one errand after another, so we've started assigning sex acts to errands. His going down on me equals grocery store, so now I love our trips to Whole Foods."


Q: Sometimes my boyfriend takes too long to finish, and I'm lying there, uncomfortable, wondering, "How much longer?" Is there anything I can do to help him get there faster?

A: Yes! But let's start with the basics: A survey of sex therapists in The Journal of Sex Medicine found that intercourse lasting from 7 to 13 minutes is the most desirable.

Well, that's great to know, but a survey of me in the journal of my vagina came up with different results, so maybe having sex for the objectively correct amount of time shouldn't be the goal here?


[How to talk to your boyfriend when he's unemployed]: It's best to put the emphasis on you. Say, "I just don't get why you're not trying harder to get a job--you're so talented! What's going on?" Complimenting him instead of insulting him will help him open up. See what we did there?

...You told him that he's deciding to be unemployed and demanded an explanation for why he made that decision?  Yeah, I see what you did there.

In LARPing (shit... this post is revealing I've both eaten bugs and LARPed, god I'm a sexy beast), when someone holds their hand up with their fingers crossed, it means they're speaking out of character.  It's a safety hatch for unambiguously saying "no, I literally mean this," so that if you say "hold up, I twisted my ankle," it's clear that you the player are hurt, not merely playing a character who's hurt.

Cosmo relationships need an "out of character" gesture, is what I'm saying.