I don't know how long I can keep doing this.  I thought Cosmo would be Cosmo forever, but now I'm afraid/hopeful it might not be.  They have a new editor-in-chief, Joanna Coles, who is slowly and subtly steering Cosmo towards growing the fuck up.

It's not drastic--which I actually approve of; if it turned into Ms. Magazine overnight they'd just lose their audience--but changes are happening.  Each issue has just a little more political and feminist content and just a little less "30 Reasons Your Vagina Is Doing Everything Wrong."  This month's issue has profiles of a woman teaching teenage girls to program, a woman campaigning for better equal-pay laws and enforcement, a female soldier who was wounded in Afghanistan and talks about why she still believes women should be on the front lines... this is not the Cosmo I know.

The magazine is still mostly fluff, and the misogyny and general weirdness are far from gone.  So I've got enough to write about this month.  But if this keeps up, I don't know.  I might have to switch to Maxim or something.  Which might not be all bad; I've mined the well of Cosmo pretty deep at this point, and could use some freshness.  Besides, making fun of Cosmo always has a little tinge of "dammit feminine women, stop oppressing yourselves!" to it; Maximocking (preliminary working title) would be addressing the intersection of masculinity and misogyny.

But for now... Cosmocking's not dead yet! 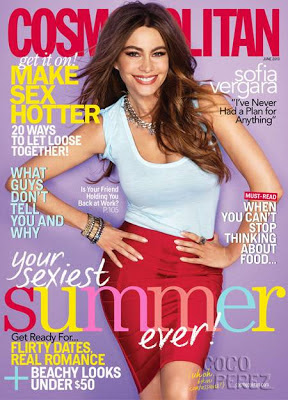 Purple color!  Sofia Vergara!  I don't know who she is, but to be fair, the only TV shows I watch are Mythbusters and Doctor Who, so I am not a very good arbiter of pop culture notability!  Um... None of these headlines are entertainingly ridiculous!  You see why I'm having problems here!

Beats the reverse, I guess.  The idea here is that you can have all the fun of drinking, but without the actual alcohol, by just acting uninhibited and a little bit confused.  Oh, and you should have a red lightbulb.  Red light is a lot like being drunk.

Fall into that bleary-eyed, no-words-needed kind of hookup that's the touchstone of drunk sex. Because you'll be in a slightly dreamy state, the next morning will feel almost the same: Did that really happen... or did I imagine it?

Kudos to Cosmo for not encouraging people to do this via actual alcohol, but I've never said to myself "that was pretty good sex, but dammit, I just remember it too well."

Recently, an anonymous NYC guy put up 600 fliers with the hashtag #ThisIsHowYouWinHerBack all over the city to try to get his ex back.  His efforts, alas, didn't work, but he's just the latest in a slew of men who are trying to dispel their growing rep as wimpy beta boys by posting love declarations online. "We're seeing some young men use big, look-at-me-antics to publicly take back their status as dominators."

Oh my God that guy's poor ex.  I mean, a couple points to the guy for not putting her name or picture out there, but all points immediately subtracted forever because being surrounded by hundreds of public "I won't let you go" messages from your ex is still horrifying no matter how memey-clever they are.

They're right, though, this is a very dominating gesture.  And that's not a good thing.  That's not "taking back" some God-given right he has as a man.  It's putting someone in a submissive position who most likely did not want to and definitely did not agree to be in that position.

[When there's lube on your hands after sex,] use the excess lube to grease each other up. Rub it on his chest and your breasts, since those areas are less likely to come into contact with the fancy linens you scored for 50 percent off at OneKingsLane.com.

1. Ew.  I mean, nothing against people who like it messy, but if you're just trying to be neat and tidy, this is... not neat and tidy.
2. Oh man, I want to see someone try this with silicone lube.
3. Really depends on position what parts of you touch the sheets.
4. Smooth product placement there, champ.  Barely noticed it.

[How to tell if a male friend wants to date you:] Tell him all about other guys you're dating, and see how he reacts.  Or ask about one of his good friends as though you're interested.  If he gets annoyed or defensive, there's a chance he may have feelings for you.

Cosmo doesn't describe how you transition the conversation from "I'm dating a ton of dudes these days... by the way, is Steve single?" to "oh, never mind, I was just making things up to upset you, want to go out?"  That seems like the difficult part.

Could You Fall for a Guy Wearing Clogs?

See? The new, more political Cosmo is all about tackling the tough issues.

[ETA: The video linked in comments on this post, and the ensuing discussion, deal with sexual harassment and assault.]
Posted by Cliff Pervocracy at 5:51 PM 68 comments:

What I Mean When I Say I'm Sex-Positive.

And I'm realizing that's a painfully ambiguous term.  I've seen people use it to mean everything from "not viewing sex as inherently evil" to "insisting that everyone should have tons of orgasms and it'll solve all their problems."  You can see how people using the first definition could have some seriously unproductive arguments with people thinking they're using the second.

About the "orgasms for everyone!" thing.  It's not entirely a strawman.  I once saw a presentation by Annie Sprinkle (who clearly wrote her own Wikipedia page) where she basically argued that we would have world peace and feminist utopia if everyone in all the armies just fucked and had orgasms instead.   It's superficially sweet-sounding--yay, pleasure!--but there's some really obvious problems.  Not everyone can have orgasms, not everyone wants orgasms, and there are lots of people who have fabulous orgasms but they're still assholes.

Sex-positivity has had problems with misconstruing personal choice as sexual repression and sexual exploitation as personal choice, and I don't want to deny that.  ("Sex work is always great because sex is super fun happy time" is every bit as vacuous as "sex work is always terrible because no one could ever possibly choose that.")  I also don't want to deny that I've done it myself at times.  But I do want to move away from it.

So here's my definition/manifesto.  Defifesto.  (I wrote a much shorter version on Tumblr, and I thought it was worth expanding upon.)  When I say that I'm sex-positive, this is what I mean:

•I think freedom of sexuality is something that we all need and very few of us have.

•I will not tolerate hatred of sex workers.
This means from all sides: employers and customers as well as moralists and police.  Sex workers are people; sex work is work.  There's often a shit-ton of misogyny and exploitation in the sex industry, but the "misogyny" and "exploitation" parts are the problem and what we should be working to fight.  Not the "sex" part.

•I believe comprehensive, honest, non-judgmental sex education is necessary for public health and happiness.
•I think understanding of sexual consent—what it is, why it matters—is sorely lacking in society and crucially important.
These two really, really need to go together.  If abstinence-only sex ed is like driver's ed without talking about cars, then sex ed without talking about consent is like driver's ed where they show you the gas and the brake, but assume you'll pick up all the "how to follow traffic laws so you don't kill people" bits on your own.

•I think the diversity and power of human sexuality is goddamn awe-inspiring.
Sex has the potential to bring great joy or great suffering.  Sex-positivity, to me, means celebrating and cultivating the joy.  Not imposing it upon people, not ignoring the suffering.  But believing that sex brings enough good things to enough people's lives that it is worth talking about, worth working on.

On the other hand, when I say I'm sex-positive, here are a few things that I absolutely do not mean:

•Accepting someone’s way of having sex means you have to participate in it, watch them engage in it, or hear about it in detail.
Yeah.  Ew.  I hate that I even have to say this.  But it comes up.  And ew.

Responsible sex-positivity requires a thorough examination of sexual ethics.  It's just that whether something seems "freaky" or hedonistic or something you wouldn't enjoy yourself should play no part in those ethics.

•Feminism should be all about sex.
•Sex fixes everything.

Plus, there's a lot of worthy feminist goals that just can't be shoehorned into being about sex.  I think promoting women's sexual autonomy and respecting the diversity of female sexuality should be a part of feminism, but I'm under no illusions that this is going to fix hiring discrimination or domestic violence.  There's a lot of unsexy work to be done in feminism, and sex-positivity shouldn't eclipse that.

No, we won't get feminist utopia through sexual freedom, but that's okay, because sexual freedom is an end in itself.  And that's what I mean when I call myself sex-positive.
Posted by Cliff Pervocracy at 11:47 AM 114 comments: