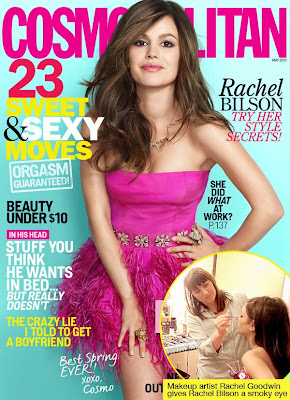 It's that time again!  Blue-green cover!  Rachel Bilson!  I have no idea who that is!  "Stuff You Think He Wants In Bed... But Really Doesn't!"  Shit, look at that grammar, I think Cosmo's headline machine is jamming up!  They better unclog it quick or they'll have "847 Ways Sex To Man Your Man Sex Man" all over the floor!

There's an actually-quite-good article in this issue about "My First Year as a Woman," by Laura Jane Grace writing about her transition.  Cosmo doesn't at all acknowledge that horrible article from a couple months ago where they were making fun of a blatantly-fictional trans woman, but maybe this is a quiet apology?  More likely, it was written way in advance and no one at Cosmo even realizes the connection.


Testosterone, one of the hormones that regulates sexual desire, is always higher in the beginning of a relationship for both men and women [...] But as the novelty wears off, less testosterone is produced, and sex with that person seems a little less interesting.

I was going to make fun of this, but it turns out that it's true; barring supplementation or something, people's testosterone always does get lower as a relationship goes on.  Because testosterone decreases with age.

In other news from 1829, graham crackers will prevent impure thoughts, as will corn flakes, and taking them along with pure living and cold baths can help you avoid the scourge of self-abuse and consequent blindness.


Unless he's blowing off work to get his fix, it's not something that requires therapy, but it does warrant a discussion.  "Let him know that you can feel the power of his erection when he hasn't ejaculated in a day or two," says Kerner. "That should give him the hint."

Yeah, I don't think you're going to be able to fool him on this one.  I'm pretty sure he can feel the power of his erection himself.


My Boobs Lost Their Power

[Author has breasts. She discusses this.] A huge part of what I appreciated about having breasts was how much men appreciated me having them. As much as dating can suck, the one consistently fun part was the reaction I got when I took of my top. It was like being in Cirque du Soleil without doing any work.

[Author enters a long-term relationship.] I wasn't prepared for the scene that occurred two months into our cohabitation. Him: Getting ready for work. Me: Also getting ready, but in jeans, topless as I searched for my bra. I thought this was a pretty hottish look, but when I walked into the bedroom, he looked me in the eyes and asked where his socks were. It's a strange feeling, as a woman, to feel air against your breasts and be talking about laundry. That's when I realized my favorite party trick was no longer new at this party.

My rack and I entered a mourning phase. We missed even the goofy adolescent attention that we used to get from him--the honk-honks and the Tune in Tokyos that he'd dole out with a dopey grin.

Oh man, I remember when I could freeze a guy mid-sentence and make him turn all goggle-eyed just by showing my boobs.  It was from about January to March of 2002.  After that, my boyfriend still liked my breasts just fine, but no longer made anime nosebleed faces when I got them out.  And everyone I got naked with after that had been in other sexual relationships and thus also gotten over their "anime nosebleed" stage, generally at some point in high school.

Which I was grateful for, because when it's morning and we're getting dressed and we have to go to work and all, I don't really want to be the Cirque du Soleil.  I'm very glad I get to decide which times are Sexy Times, instead of getting dragged into it every time I shower or change my clothes.

Then again, clearly I have a lot of philosophical differences from this author, because I have never once felt a twinge of wistful nostalgia for having my breasts honked.

2. Strongly hint that you're in the mood, then play hard to get and make him work at seducing you

That's actually a good point, except for the part where every other issue of Cosmo lovingly teaches women how to do exactly that.

Also, the reasoning they give for this isn't "because he can't tell with 100% certainty the difference between 'hard to get' and 'actually not wanting it,' and refusing to clarify this is not just annoying, it erodes the meaningfulness of consent in your relationship."

No, it's "Just what a guy wants when he gets home from work: more work."  Because "The Chase is a game for those who've just met."  (And then the author gives the example of how he dated a vegan girl so he ate vegan food to have sex with her, and that's some serious work.  He ate cheeseburgers afterwards though, wink nudge!)  And, of course, "we worked hard to catch you in the first place, so let's just enjoy the fruits of our labor."

Oh yeah, that's what women are into: feeling like particularly large fish.


So here's the thing: Guys don't require fancy moves or costumes to get turned on. We're simple creatures with simple needs.

"We're simple creatures with simple needs, and that's why you need to subscribe to an entire magazine about how to find us; how to dress, make up, and present yourself to please us; how to perform a large variety of numbered sex acts upon us; which sex acts you must never perform; and why you're screwing up all your relationships with us.  Because we are so simple!"

whip-dar, n., A woman's astute ability to sense just how whippable a guy really is.

Does anyone really want to "whip" their boyfriend?  (Certainly some people want to whip their boyfriend, and hey, that's just fine if he's into it.)  I mean, when I watch TV shows with Rowdy, it's because I think we both enjoy them and we're bonding over them.  If I found out he felt "whipped" into it and actually hated the shows, I'd be crushed.

Then again, I live in a universe where people of different genders can enjoy the same activities.


If you simply tell him you're not going to have an orgasm, what he may hear is: "I'm not enjoying this at all. You are less than a man."

Well, tough, because that's not what I said.  I am not responsible for things people decide to imagine I said.

Cosmo's advice, however, is that if you're not going to come you should try and make him come, because that'll get it over with, and boy, there's nothing more sexy and intimate than getting it over with.


I get excited when my crush Likes my pictures on Instagram. But he Likes a lot of other girls' pictures as well. We seem to have a good connection in person. Can Liking my photos mean something more?

If it simplifies your life any, person, I don't Like this at all.
Posted by Cliff Pervocracy at 7:23 PM 58 comments:

[I'm back!  I know, another really long unannounced hiatus.  I have a good excuse this time.  I had to move sort of unexpectedly and under less than ideal conditions.  I still don't know what I want to say about it, except that this wasn't about Rowdy; Rowdy continues to be awesome.  Anyway.  I'm in a good place now and I have time/energy to write again.]

My usual flippant answer--which also happens to be my most  emotionally honest--is that it's like asking how I can be a feminist and keep guinea pigs.  What do my hobbies have to do with anything?  Kink is just a fun activity that involves a different part of my personality.

I also find a lot of the arguments against kink, like the ones in this much-mocked article and many of the ones that pop up in feminist contexts like this random post, to be deeply... god, I'm sick of the word "problematic."  Fuckin' weasel word that can mean anything from "got some facts wrong" to "basically a Nazi."  I find these arguments to be misguided and annoying and sometimes demeaning in exactly the ways feminists are supposed to oppose.

For one thing, a whole lot of those arguments could apply to plain ol' sex.  It can be used as a weapon of, and an excuse for, horrific abuse?  People are sometimes unintentionally harmed doing it?  It's horrible when done nonconsensually?  There are some really awful people who are into it?  A lot of the narratives around it are sexist, hetero/cisnormative, body-policing, and glamorize unsafe and questionably consensual activities?  The industries that sell media and services related to it are often nightmarishly exploitative?  I don't want to deny or minimize the fact that all these things happen in BDSM.  I just don't think it's any worse in kink than in sex.

Actually, I'll go a little further than that.  While "kink is always consensual!" is facile white-washing, on average kinksters are more aware than the general population of what consent is and why it matters.  We talk about it a lot more, and we (at least try to) socially normalize the idea of negotiating it.  We acknowledge that different relationships have different rules and roles, and that gender does not determine them.  We freely admit that lots of people simply aren't wired for what we do, or for specific ways of doing it.  We have concepts like "Risk Aware Consensual Kink" and "Your Kink Is Not My Kink, But Your Kink Is OK."  Again, I won't pretend we all apply these concepts all the time, but... the fact that we even hold these as ideals puts us a little bit ahead of society at large.

I also think a lot of "BDSM is sexist" arguments wouldn't long survive an encounter with a female dominant or a male submissive.  Female dominance is not about women dressing up in leather for men to admire.  It is an actual kink that women can have.  If you see a woman getting her rocks off by having a man service her, and you think "clearly she's only doing that to please him," you're desexualizing her and disregarding her desires.  Although you're still a step ahead of the people who don't even acknowledge that female dominance is a thing at all.

Of course, if we got into the fact that same-sex, nonbinary, and nonsexual kink exist, we'd be here all day.  (I've heard arguments that queer kink is still sexist because people are enacting male and female roles, but... if you see someone who isn't a man being dominant and you think "clearly she's being the man here," I think the problem is on your end.)  And I don't even know what would happen if we let some of these critics know about switching.

Finally, there's the question of whether feminism has any business saving women from themselves.  Because there's a really bad track record here.  At various times, various branches of feminism have swooped in to "save" femme women, married women, women who stay home with their kids, women who do sex work, cis women who welcome trans women into women's spaces--and it has always been a disaster.  It's forced women to defend their dignity and even their safety from the people who are supposed to be advocating for them.  I'm not saying any of these groups are the same as submissive women, obviously, only that "you say you want this... you poor thing" hasn't historically worked out well for feminism.