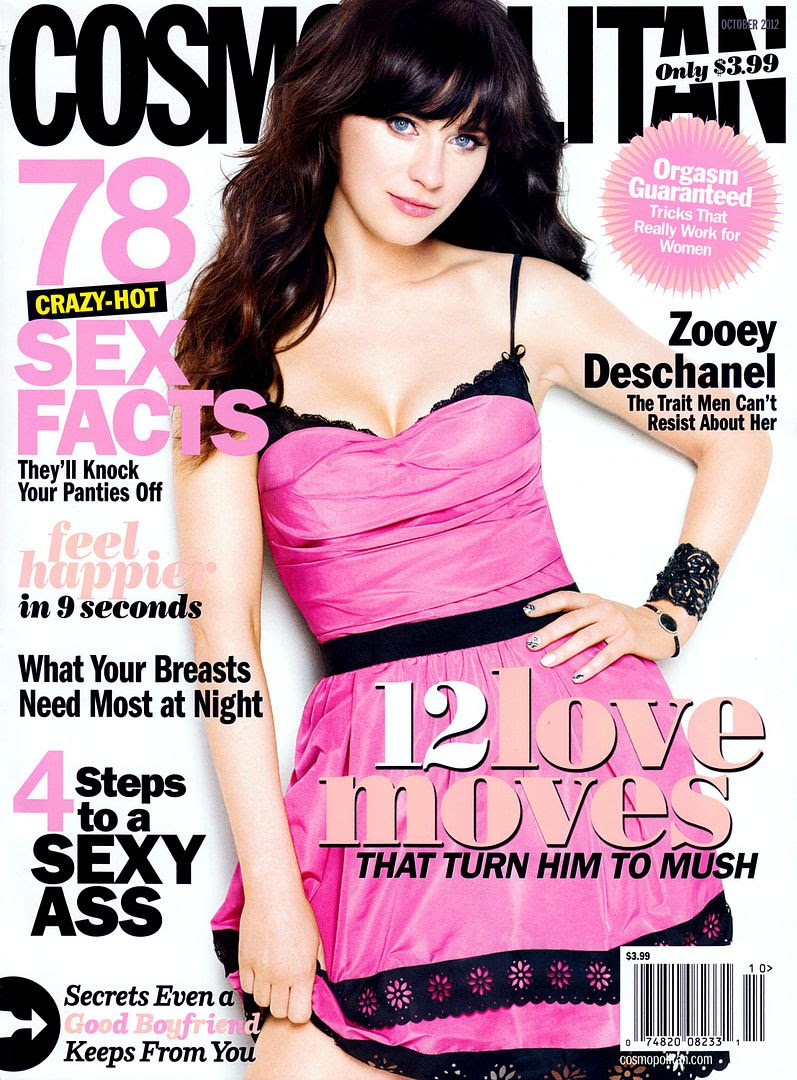 White cover!  Zooey Deschanel!  I don't know if her "quirkiness" is a marketing strategy or is the Real Her, but frankly, not having any personal relationship to her either way, I'm not bothered by that lack of knowledge!  "Orgasm Guaranteed!" Because "this helps some people have orgasms so maybe it's worth a try for you" is just not how Cosmo rolls!  "Secrets Even a Good Boyfriend Keeps From You!"  Spoiler: they're all incredibly mundane white lies like "he thinks you do look fat in that dress," but boy, doesn't it look scandalous on the cover!  "Feel Happier In 9 Seconds!"  I did it in 2, but then I had to dig Cosmo back out of the bin so I could finish this post!


Girlfriend apartments are amazing.  They smell nice, have the most comfortable beds, and are always clean.

The instant I read this, I got up and took a picture of my bedroom. 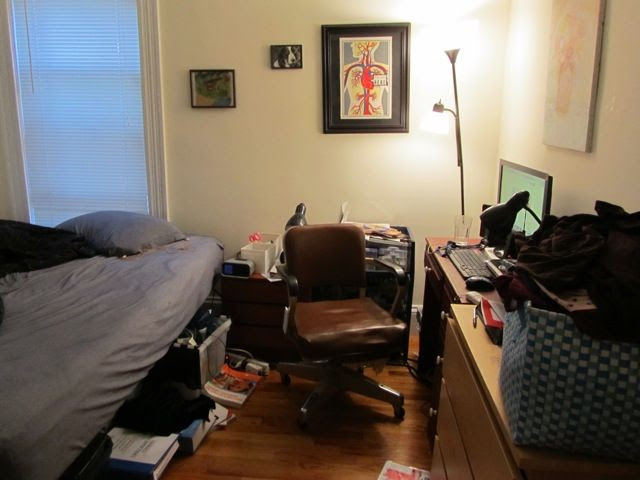 So, uh.  Hi Internet.  I didn't realize you were coming over. I would have straightened up.

(Okay, not exactly a woman, but raise your hand if you don't know a woman whose apartment makes mine look like a Better Homes and Gardens spread.)


The C-Spot: Yep, he has one too. It's the C-shaped outer edge of his ear, and it's supersensitive.

The N-Spot: It's the area right in the middle of the back of his neck.

The K-Spot: The skin behind his knees is thin and full of nerve endings.

The A-Spot: Your guy's ankles called, and they want some love too.

I hope they follow this up in the next issue with an article about "Does the N-spot really exist?  Does it contain nerves?  Or is it all a myth?  Science is still debating!"


The Random Way He Decides if You're Dateable

The article, sadly, does not go on to say that if you have a pet snake, you have hundreds of ribs and only need to eat every two weeks.


"If you're in the electrical section [of a Home Depot], ask him if he feels the sparks flying too. It sounds dumb, but guys love humor."

Most guys do love humor. That's why they're cringing right now.


[If "your man" doesn't cook:] You have to teach him--start by asking him to food shop.  If he gets the wrong kind of cheese, don't make a big deal out of it, otherwise he'll curl into the fetal position and never go near the dairy aisle again (kidding... kind of). Once he finds out he can gather supplies for a meal, have him help with the food prep.

This is great advice for teaching a five- or six-year-old child to start helping out in the kitchen.  It's a little disconcerting when the man in the image illustrating this article looks roughly thirty-five.

There's three main reasons men (or anyone) don't cook: Not caring what they eat, thinking someone else should cook for them, or not knowing how to cook.  All three have different solutions and not one is "baby him along like you're trying to convince a timid puppy to go out in the snow."


Five: The number of times you should casually touch a guy you're into within 15 minutes. Men aren't always fluent in subtlety, so several pats on the arm, pecks on the cheek, and hands on the knee are necessary.

Well, touching someone who isn't your partner or close friend every three minutes is not subtle.  Sort of creepily intrusive if the attraction isn't mutual but your touches have enough "plausible deniability" that they feel weird asking you to stop... but not subtle!

Of course, overcoming all this subtlety wouldn't be necessary in the first place if Cosmo gave advice on verbal flirting any more direct than "try changing the angle of your hips slightly in his direction."

Maybe you could ask this guy if he feels sparks flying too?  And if he gets confused just ask him to go to a Home Depot electrical department with you.  That's a great first date anyway.


By the time you're 32, your clitoris is four times larger than it was at puberty.

Far be it from me to dispute such an authoritative-sounding claim, but wouldn't that make it, like, four inches long by now?  I'm pretty sure that didn't happen to me.  I would have noticed.

(I feel weird needing a citation to prove something that is already proven in my pants, but here you go.)


Most 20somethings have sex 112 times a year, according to a study.

One of these days I'm going to offer Cosmo's editorial staff a free seminar on the use of the words "average," "median," "majority," and "plurality."  I know they don't want to confuse readers with fancy math terms or whatever, but this is just embarrassing.


[On how to initiate butt-play:] Slowly massage his perineum (the tender spot between his balls and his butt). If he doesn't object, work your way back.

You know I'm going to say this is a consent fail, and it really is.  Both because "not objecting" isn't consent and because consent to having your taint tickled is not consent to a finger up your bum.

But there's another problem here.  One that ought to chill the bones even of people who think asking before buttfucking is unromantic Robot Lawyer nonsense.  If you don't give your partner an unambiguous heads-up before going for his butthole, you don't give him the chance to say "whoa, not right now, I've got a massive poop on deck."


Hit a used bookstore and grab a few big travel books. Having these pretty tomes stacked on your coffee table screams "world traveler."

I don't want to end this post on a non-consensual poop-smearing note, so I'll just say: buy books because you want to read them, goddammit.  If you've traveled the world, you'll have more personal ways to show it off, and if you haven't, why not show off something you're actually proud of?

Life is too damn short to waste on looking cool.  Don't waste a second or a penny that you could be spending on being cool.
Posted by Cliff Pervocracy at 6:11 PM