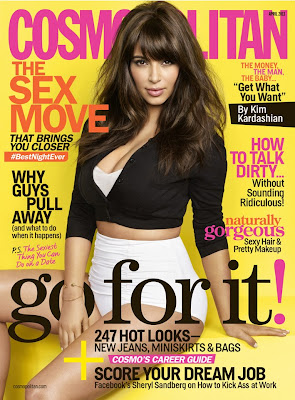 Yellow cover!  Kim Kardashian!  I don't know what's going on with her... lower garment!  I think Cosmo's stylists are getting pretty desperate to make the 35,000-year-old concept of "wearing clothes" seem fresh and new every month!  Go ahead and trace a line from the center of Kim's cleavage to the center of her neck and explain what kind of skeletal structure that implies!  Also please note that her arms are different lengths!

(I think what's going on here is that they've Photoshopped away all creases and features on her neck, which makes the side of her neck look like the front.  And they posed her with both arms behind her so that her chest would stick out, but then her right arm looked wrong or wasn't visible, so they pasted on a replacement arm.  Which would explain the surreal way her hand is interacting with her thighs.)


"I loved reading 'Can Sex Make You Skinnier?'  The next time I had an intense carb craving, I marched right into my bedroom and pounced on my sleeping, unsuspecting boyfriend.  I'm thankful for my new weapon in battling bulge, and my boyfriend is too!  Thanks, Cosmo!"  --Sarah A., Nashville, Tenn.

I'm not, like, an expert in forensic writing analysis or anything, but I think Cosmo's letters page is fake.  Just a hunch here.

Also I would prefer to not eroticize "pouncing" on "unsuspecting" people, but if I point out every time Cosmo does that, we'll be here all day.


Four tiny bottles, each with a secret code name, sit on a shiny table in front of Kim Kardashian, awaiting inspection.  Inside the vial are versions of her latest fragrance, Glam, which is being tweaked to appeal to Japanese consumers. [...] She waves each test strip in front of her perfect, pert nose.  Opulence is too heavy for Asian tastes, she proclaims.  Sequins? Too soft.  "I don't even smell Glitzy any more," she says, before settling on her choice: Geisha Garden.


Within hookup culture on college campuses, dating is one of the most radical, nonconformist things you can do.

Oh, for fuck's sake.  Yes, young people have casual sex.  No, the entire population between ages 16 and 26 is not subsumed into this boogeyman "hookup culture" where they're all like "what is this Earth thing you call 'love'?"  I would really like the media to get over this particular obsession already and move on to telling us that eating caramel leads to Satanism, or something.


Because our ancestors spoke with their bodies rather than language, we learn more from gestures than words when first meeting someone.  If he's facing you directly, you have his full attention.

I don't think we needed to invoke grunting cavemen to explain the concept of "people look at things they're interested in."

...I would also like to explain to Cosmo that all language is produced by the body.


Make him feel like a piece of meat: "It's a huge turn-on to hear a woman objectify me," 30-year-old Christopher says.  "It seems simple, but it's so powerful."  Take his words to heart and don't be afraid to tell your guy everything you like about his body or what he does that drives you crazy.  He'll be obsessed.

That's not what objectification means.  That's not making him feel like a piece of meat.  That's just sexual compliments.  Yeah, sure, it's easy to say "I don't know what those ladies are complaining about, you can objectify me anytime" if you think it means your girlfriend tells you you have sexy abs.


Q: My guy constantly asks me for cash to pay the bills.  He's going through a rough time and I don't mind helping out, but how can I stop this from being a regular thing?

A: The fact that he's asking you for financial help--a tough thing for many guys to do--is a sign that he trusts you. 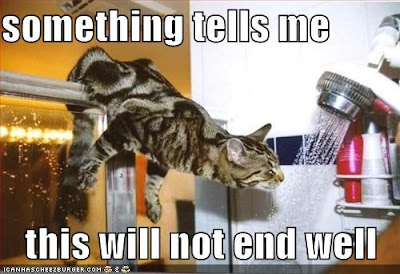 He Said He Wasn't Ready For Kids [...]  One month, I realized I'd forgotten to take my birth control pill... for five days.  I asked Matt if he thought this was a sign.  "I don't think it's time yet," he said.  Three months later, the same thing happened.

Oh shit, I already used my "this will not end well" image.

(In seriousness, sabotaging birth control is a horrible thing to do, both to your partner and your potential child.  It's really not a cutesy-wootsey "tee hee, whoopsy daisy, hint hint" thing to do.  It's pretty highly correlated with domestic violence.)

Man-Child: Invites you over to watch a movie, then texts you to pick up a six-pack on the way

Getting There: Attempts to go down on you (he's trying!)

Yep, He's A Man: Reaches for a condom before you have to ask

1. What's wrong with asking someone to bring beer?  I guess it's a little demanding, but "hey, honey, I'm out of beer over here, you want to bring some with you?" is really not that out of line if you like to have a beer with your movie.

3. I guess this does rank higher than "just going ahead and having unprotected sex unless you stop him," but... significantly lower than "actually discussing protection before 0.4 seconds prior to intercourse."

Many things in my life are about control and domination, but eating should be a submissive experience, where you let down your guard and enjoy the ride.  I don't have much patience for people who are self-conscious about the act of eating, and it irritates me when someone denies themselves the pleasure of a bloody hunk of steak or a pungent French cheese because of some outdated nonsense about what's appropriate or attractive.  Stop worrying about how your breath's going to smell, whether there's beurre blanc on your face, or whether ordering the braised pork belly will make you look fat. [...] It's all about the enjoyment of the moment and the company and the food.  And if you can be yourself slurping spicy peanut noodles in front of another person, you may have a keeper.


This issue has an article by Anthony Bourdain!  What the heck is he doing here?  Anyway, it's awesome.  And not just because he writes with actual voice instead of "frenemy's va-jay-jay sexcapades" Cosmo-diction.  It's awesome because this is the only article in this magazine full of anatomically detailed sex talk that is actually about pleasure.