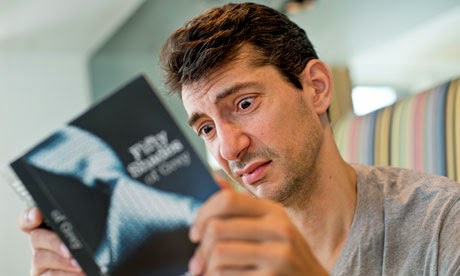 
Following my more thorough examination of your issues, may I bring to your attention the definition of submissive. submissive [s uhb-mis-iv] – adjective 1. inclined or ready to submit; unresistingly or humbly obedient: submissive servants.

con·sent  [kuhn-sent] - verb (used without object) 1. to permit, approve, or agree; comply or yield (often followed by to  or an infinitive): He consented to the proposal. We asked her permission, and she consented.

This next exchange occurs over the course of nine emails, each one complete with subject lines, time stamps, and sig files, but I'll compress it into a dialogue because FOR FUCK'S SAKE:


Chunk BluntFob: I will collect you from your apartment at 7:00 tomorrow.

Ana: Sir I have a car. I can drive. I would prefer to meet you somewhere. Where shall I meet you?

Chunk: I refer to my email dated May 24, 2011 sent at 1:27 and the definition contained therein. Do you ever think you’ll be able to do what you’re told?

Ana: Mr. Grey I would like to drive. Please.


He’s even grumpy by email. Doesn’t he understand that I may need to make a quick get-away? Not that my Beetle is quick… but still – I need a means of escape.

This is starting to bother me more than "abuse and the heroine loves it" fiction, because it's not just saying those behaviors are romantic; it's saying that feeling afraid and unwilling is too.  It's saying that if your thoughts before going on a date aren't "I hope we have a good time!" but "let me get my escape routes in order in case this gets physical again," that's an acceptable stage in a blossoming romance.

I really wanted these posts to be funny and silly, but here we are.


Paul is back from Princeton before he sets off for New York to start an internship with a financing company. He follows me round the store all day asking me for a date. It’s annoying.

Maybe the reason Hair SinkClog seems like a viable option to Ana is because every man in her universe is equally intolerable.


I rarely wear make-up – it intimidates me. None of my literary heroines had to deal with make-up – maybe I’d know more about it if they had.

If only there were a scene in Jane Eyre where Jane goes through "I then applied the mascara slowly and evenly along my upper lashes only, curling upward as I went."  How careless of Charlotte Brontë to not include one.


“What would you like to drink?” My lips quirk up in a quick, sly smile as I sit and slide into the booth – well, at least he’s asking me. “I’ll have what you’re having, please.” See! I can play nice and behave myself.

God, she's internalizing it.  She's starting to associate "in accordance with this guy's completely arbitrary desires, which I'm just now learning to predict" with "good and right, which I should have done all along."  In this book where nothing else makes sense, where unused sneakers stink and Vancouver is south of Portland, it's unsettling that the one thing that's unfailingly realistic is the psychology of abuse.


“You know this contract is legally unenforceable.”“I am fully aware of that, Miss Steele.”"Were you going to tell me that at any point?”He frowns at me. “You’d think I’d coerce you into something you don’t want to do, and then pretend that I have a legal hold over you?”“Well… yes.”“You don’t think very highly of me at all, do you?”“You haven’t answered my question.”

Ana's actually pretty sharp sometimes.  This is yet another exchange where she makes some extremely good points and he completely dodges the implications and they never really get resolved at all.


“Did you have similar discussions with um… the fifteen?” “No.” “Why not?” “Because they were all established submissives. They knew what they wanted out of a relationship with me and generally what I expected. With them, it was just a question of fine-tuning the soft limits, details like that.”

The hell it was.  Speaking as an "established submissive" myself (well, it's not like I have a listing with the BBB, but I've been doing this stuff the majority of my adult life), you don't grow out of needing to negotiate.  You don't start saying "the usual" when someone asks your hard limits, because you come to realize there is no usual.

You might be able to work out the details of a scene a little more efficiently when you have more experience, but when it comes to an entire D/s relationship, an experienced submissive is going to have more to talk about in negotiation, because they have a better idea of what the pitfalls can be.


[Ana:] “I think we should stay in public, on neutral ground.” He smiles sardonically. “Do you think that would stop me?” he says softly, a sensual warning.

Who shelved this fucking horror book in the romance section?


“My sexual health. Well, all of my previous partners have had blood tests, and I have regular tests every six months for all the health risks you mention. All my recent tests are clear. I have never taken drugs. In fact, I’m vehemently anti-drugs. I have a strict no-tolerance policy with regards to drugs for all my employees, and I insist on random drug testing.”  Wow… control freakery gone mad. I blink at him shocked.


“Do you really think I would do that? Go beyond any limit you can’t take?”

He does this a bunch of times in this chapter--rather than saying "I won't hurt you," he phrases himself as the wounded party because she has the audacity to think he would hurt her.  (This is in between threats to hurt her.)

I wish I had more jokes for this chapter.  Instead, I just have to observe that once again, this is a remarkably true-to-life abusive behavior.


“You’ve said you’ve hurt someone before.” “Yes, I have. It was a long time ago.” “How did you hurt them?” “I suspended them from my playroom ceiling. In fact, that’s one of your questions. Suspension – that’s what the karabiners are for in the playroom. Rope play. One of the ropes was tied too tightly.” I hold my hand up begging him to stop. “I don’t need to know any more. So you won’t suspend me then?” “Not if you really don’t want to. You can make that a hard limit.”

So there's two things I notice here.  The first is that hurting someone doing a suspension is a pretty big frigging deal, and his reaction here is all off.  Even if Ana doesn't want details, he needs to make it clear that he takes this seriously and he's taken steps to make sure it never happens again.  Instead, he basically shrugs it off and tells her that she's allowed to say no (how generous of him) but otherwise he plans to suspend her too.

I don't know if Tractor JohnDeere doesn't notice this or doesn't care (presumably both), but either way, it speaks extremely poorly of him as a dom that he's still going through this "we're negotiating the exact details she wants" farce without observing that she obviously doesn't want to do any of this.


I will fuck you, any time, any way, I want – anywhere I want. I will discipline you, because you will screw up. I will train you to please me. But I know you’ve not done this before. Initially, we’ll take it slowly, and I will help you. We’ll build up to various scenarios. I want you to trust me, but I know I have to earn your trust, and I will.

That last part sounds all nice and all, until you remember that the last time he saw her, he broke into her house and raped her, then walked out and left her sobbing.  I think he's kind of missed the window on earning her trust at this point.


I frown and take a bite of cod, trying to assess mentally what concessions I’ve gained. The food, the sleep, I can look him in the eye.

It's sad that she's thinking of her being able to eat and sleep when she wants as "concessions."  As things she's taking away from him.


“… Your body gives you away. You’re pressing your thighs together, you’re flushed, and your breathing has changed.” O, this is too much. “How do you know about my thighs?” My voice is low, disbelieving. They’re under the table for heaven’s sake. “I felt the tablecloth move, and it’s a calculated guess based on years of experience. I’m right aren’t I?”

He knows she wants him because he felt it through the tablecloth.  It was a particularly sexy tablecloth tug, you see.  Experienced Tablecloth Doms would know it anywhere.  I... at this point I can't say "I love this book," even in jest, but now and then it is pretty damn precious.


My car pulls up outside. Christian’s mouth drops open. “That’s what you drive?” He’s appalled. Taking my hand, he leads me outside. The valet jumps out and hands me my keys, and Christian coolly palms him some money. “Is this roadworthy?” He’s glaring at me now. “Yes.” “Will it make it to Seattle?” “Yes. She will.” “Safely?”

Going from Vancouver to Seattle is a few hours' trip on a flat, wide freeway.  It's not some mountain journey that requires a super rugged vehicle.

Of course, this isn't really about her car.  It's about him finding another way to make her feel inferior and put her in his debt:


“Oh, Anastasia, I think we can do better than this.” “What do you mean?” Realization dawns. “You are not buying me a car.” He glowers at me, his jaw tense. “We’ll see,” he says tightly.

When buying your lover a car is a threat you make angrily, you've made some major mistakes in what you think a lover even is.


If I do this thing… will he be my boyfriend? Will I be able to introduce him to my friends? Go out to bars, the cinema, bowling even, with him? The truth is, I don’t think I will. He won’t let me touch him and he won’t let me sleep with him.

Bobcat ForkLift probably won't go bowling with her, but not because he's a dom.  Because he's a "people who have sex with me are basically sex toys and should be shoved in the back of the underwear drawer when I'm not using them" asshole.


I climb into bed. As I lie staring into the darkness, I think of all the times he warned me to stay away. ‘Anastasia, you should steer clear of me. I’m not the man for you.’ ‘I don’t do the girlfriend thing.’ ‘I’m not a hearts and flowers kind of guy.’ ‘I don’t make love.’‘This is all I know.’ And as I weep into my pillow silently, it’s this last idea I cling to. This is all I know, too. Perhaps together we can chart a new course.

Or perhaps you could date someone else, someone who does the girlfriend thing and is a hearts and flowers kind of guy and makes love (and ISN'T A RAPIST), and your new course would be a hell of a lot easier to chart.
Posted by Cliff Pervocracy at 11:36 AM