ANNOUNCEMENT: I will be speaking at the University of Chicago Sex Week again this year!  I'll be talking about "Sex Outside The Lines" at 7pm on Saturday, February 8, on the second floor of the Logan Center (915 E 60th St.)  It's free and open to the public, and last year was a great time, so I highly encourage you to attend if you're in the area.

On Saturday night, I went to a kink party with Rowdy and his girlfriend Artemis*.  We walked around for a bit watching people scening, then I asked if they wanted to do a scene where they both topped me.  They did, so I stripped down to underwear and we talked.  I told them I wanted to be punched and flogged, mostly on the back over the shoulderblades, and we agreed how I would let them know if I was having a good time or a bad one.

And then they started hitting me.  Rowdy and Artemis took turns, first bare-knuckled and then with leaden sap gloves, then with a heavy leather flogger.  It started out slow with a lot of "how's that? harder?" and quickly got more primal.  For a while I was laughing with every blow, then gasping as the pain built up.  While Artemis punched me, Rowdy held me from the front, hugging me to his chest as I alternately giggled and moaned.  Artemis dug her fingers deeply into my back, grabbing the bruised and tender muscles, twisting them.  That's when I started to slip into a trance.  I closed my eyes tightly and stopped laughing and everything turned inward.  The blows stopped being "pain, but good" and started being "good, but good."  Rowdy and Artemis took turns a few more times.  They were holding my hair, kissing each other over my shoulder, biting my skin.  I was less and less aware of time and of what specifically they were doing, and more aware of... flying.  Just flying through endless inner space on a rocket made of endorphins and sweaty leather.

*Oh, right.  Rowdy broke up with Sprite like three years ago and he's been dating Artemis for more than a year now and she's pretty awesome.  Probably should've mentioned this at some point.

So you can see why I'm completely appalled and disappointed by the way my beloved kinks are presented in Fifty Shades of Grey.  It's one of the most joyous things in my life, and it's being forced on someone who hates it, and E.L. James is saying this is okay and sexy.  It breaks my damn heart.


I head into the kitchen. Nervous, butterflies flooding my stomach, it’s like having a panther or mountain lion all unpredictable and predatory in my living room.

See, this really isn't supposed to be how you feel about a partner.  I've been nervous having new partners over, but it's been a good nervous, like I have a big celebrity in my living room and I'm overly eager to impress them.  Not the kind of nervous where maybe they'll eat me.  (And yes, this includes kink partners.  I might be nervous about what a scene will be like with them--although even that's a happy nervous--but I'm not nervous just having them around me.)


“I bought these [first-edition books] for you,” he says quietly his gaze impassive. “I’ll go easier on you if you accept them.” I swallow convulsively. “Christian, I can’t accept them, they’re just too much.” “You see, this is what I was talking about, you defying me. I want you to have them, and that’s the end of the discussion. It’s very simple. You don’t have to think about this. As a submissive you would just be grateful for them. You just accept what I buy you because it pleases me for you to do so.”

(This isn't really true, because being a submissive doesn't actually mean a person never has any opinions about anything, but if he's going to claim that, let's take it to its logical conclusion.)

Her subconscious is such an asshole.

Honestly, is anyone in this book not an asshole?  The only people I can stand are Ana's dad and Kate, and that's only because I keep picturing them as Billy Burke and Ashley Greene.


“Shall we go through the soft limits?”


“I have a couple of interviews for intern places.” “You were going tell me this when?” He arches a brow. “Err… I’m telling you now.” He narrows his eyes. “Where?” For some reason, possibly because he might use his influence, I don’t want to tell him. “A couple of publishing houses.” “Is that what you want to do, something in publishing?” I nod warily. “Well?” He looks at me patiently wanting more information. “Well what?” “Don’t be obtuse, Anastasia, which publishing houses?” he scolds. “Just small ones,” I murmur. “Why don’t you want me to know?”

Every fucking conversation with this guy is like this.  I don't think there's been a single time they've talked when Ana's answers were good enough for him.

...No, wait, there was.  When he first asked her out, that very first coffee date, she told him about her family and he listened.  He didn't pick on every damn thing she said or force her to talk about what he wanted, he listened politely and shared things about himself.  He wasn't exactly warm, but he was appropriate.  It was only once they were dating that he started berating her every time they talked.

...What kind of romance writer includes a goddamn grooming phase?

And it's one of those things where even if this relationship wasn't abusive, it just sounds like no fun at all.  They never have any conversations where they come up with goofy in-jokes and laugh until they can't breathe, or stay up too late sharing "I've never told anyone this story before" secrets, or give each other unbearably cutesy little kisses on the nose.  All they ever have is tense stand-offs. It's about as romantic as a traffic court hearing.


“Besides, it’s not something we can dive into,” he smirks at me.

I'll don't know if I'll be able to top this image from Jenny Trout's FSoG recaps.  But I'm willing to try. 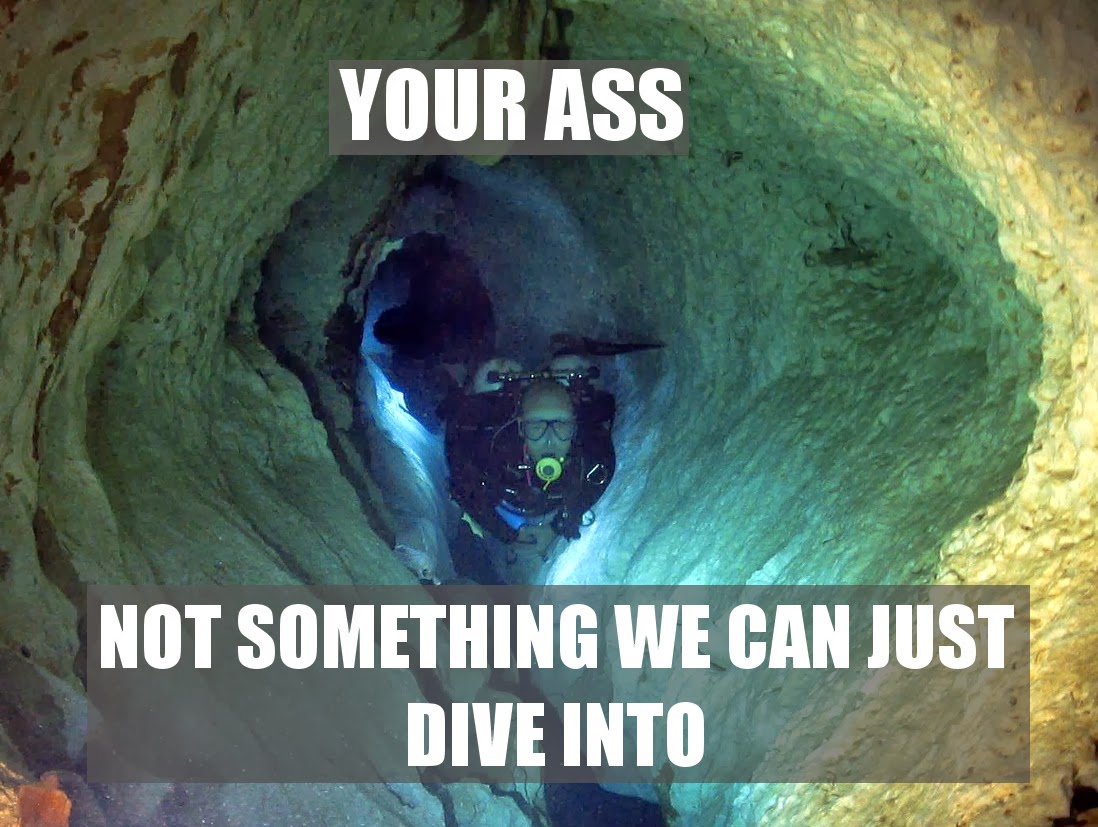 “Your ass will need training.”


“So, what’s your general attitude to receiving pain?” Christian looks expectantly at me. [...] “Do you have to do it?” “Yes.” “Why?” “Goes with the territory, Anastasia. It’s what I do. I can see you’re nervous. Let’s go through methods.”


He shows me the list. My subconscious runs, screaming, and hides behind the couch. • Spanking • Paddling • Whipping • Caning • Biting • Nipple clamps • Genital clamps • Ice • Hot wax • Other types/methods of pain  “Well, you said no to genital clamps. That’s fine. It’s caning that hurts the most.”

E.L. James really doesn't get it.  If you're a bottom, you're most likely going to be turned on and intrigued by talking about different ways you could experience pain.  You're going to be like "whipping? caning? ooh, tell me more."  Not "oh god I don't even want to know."  How can Ana negotiate what kind of kink she's into when she obviously isn't into any of it?

Also, caning doesn't necessarily hurt the most.  Really depends how you do each kind of play and how the bottom's body reacts.  Personally, I'd put paddling at the top of the list.


“Come on, Anastasia, talking through all this, I want to fuck you into next week, right now. It must be having some effect on you too.” I squirm. My inner goddess is panting.


“Well then. Look, earlier today you were talking about wanting more,” he halts, uncertain all of a sudden. Oh my… where’s this going?  He clasps my hand.  “Outside of the time you’re my sub, perhaps we could try. I don’t know if it will work. I don’t know about separating everything. It may not work. But I’m willing to try. Maybe one night a week. I don’t know.” Holy cow… my mouth drops open, my subconscious is in shock, Christian Grey is up for more!  He’s willing to try!

Oh man, what a steaming pile.  She starts to look like she's serious about not giving in to all his demands, and suddenly he's willing to have a relationship with her in the most manipulatively "but don't go thinking I like you" terms possible.

What kind of bullshit is this emotional time-share deal anyway?  You can't be in a romantic relationship with someone on Wednesdays and then feel nothing on Saturdays.  Even offering that is an unforgivable mindfuck.


“I have one condition.” He looks warily at my stunned expression. “What?” I breathe. Anything. I’ll give you anything. “You graciously accept my graduation present to you.”  “Oh.” And deep down I know what it is. Dread spawns in my belly. [...] Parked outside is a red hatchback car, a two-door compact Audi.

So even his mindfuck comes with strings.  Grrreat.

It's interesting (read: horrible) that not only does his "present" fill her with dread, he knows it will! There's not the slightest pretense here that he could give her a present because he wanted to make her happy, and she could accept it because it made her happy.

Now, I'm not real up on formal gift-giving etiquette, but I'm pretty sure that once you've threatened to rape someone for not accepting your gift, you are no longer on the right side of Miss Manners.


Boy, he’s angry. He grabs my hand and leads me back into the apartment and straight into my bedroom… no passing go. My subconscious is behind the sofa again, head hidden under her hands. He switches on the sidelight and halts, staring at me.

I guess as long as literally the only word you read in this paragraph is "bedroom," it's sexy.


“I want to be inside you. Take my jeans off. You’re in charge.” Holy fuck… me in charge.  My mouth drops open. “What are you going to do with me?” he teases. Oh the possibilities… my inner goddess roars, and from somewhere born of frustration, need, and sheer Steele bravery, I push him on to the bed.

So this is weird.  He demands she fuck him, then when she starts going along with it, he suddenly tells her to top, although realistically the only authority she has here is "any color you want as long as it's fucking this guy."


I am fucking him. I am in charge. He’s mine, and I’m his. The thought pushes me, weighted with concrete, over the edge, and I climax around him… shouting incoherently.


He grabs my hips, and closing his eyes, tipping his head back, his jaw strained, he comes quietly. I collapse on to his chest, overwhelmed, somewhere between fantasy and reality, a place where there are no hard or soft limits. 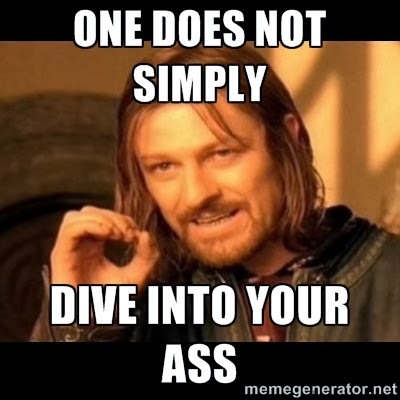 Posted by Cliff Pervocracy at 8:49 PM