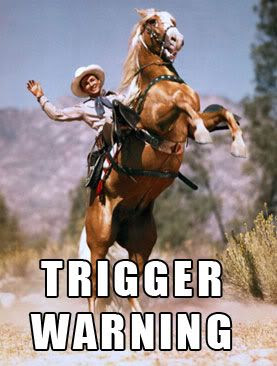 I have rape fantasies. Not the worst kind, I don't really want to be hurt, just roughed up a bit and held down by someone I'd want anyway so they can force me to do things that I'd enjoy anyway. But I'm saying "no" and I mean it and they're not listening. And the "things that I'd enjoy anyway" can get pretty harsh. It's not just fucking, it's beating, binding, cutting, piercing, humiliation, being used for sex that hurts and I really don't enjoy--nasty stuff. Stuff that would be so not okay in the real world.

I'm always the victim, or in third-person I identify with the victim. I can't imagine myself hurting someone else. I can get off on being a sweet dominant, on giving someone what they really want, but even in my mind I need them to be very clear that they're really enjoying it.

This goes against pretty much all my values, but I'm okay with it since it's just fantasy. If I can play games where I kill human beings, I can have fantasies where I do other things that would be terrible in real life. The only time I get uncomfortable is when I read rape (ahem, "non-consent") stories written by other people--they turn me on, but I always worry about the writer. Some of them sound like they might not be nice people. I know it's hypocritical, but hearing someone else's rape fantasies creeps me out. And gets me off.

The explanation I've heard multiple places for rape fantasies is "oh, women want to think someone lusts for them so much that it's uncontrollable." Or "oh, women want sex without guilt, because it's not their fault." I think both of these are pretty much bullshit. Maybe they explain "bodice-ripper" rape fantasies, the kind where he's forceful but gentle, but my fantasies just seem meaner-spirited than that. I think it's just straight-up masochism. I don't think you can explain it away as something that's really sweet and fuzzy on the inside.

I'm not sure if I'd like rape play in reality or not. I know it would take a lot of trust, I couldn't do it casually. But I have this horrible suspicion that it would actually be kinda fun. "Fun" might not be the word? An experience worth having.
Posted by Cliff Pervocracy at 11:42 PM