It's that time again.  (And it's totally Tuesday, just like I promised.  Shhh.)  Thanks to Rowdy and Star for co-Cosmocking! 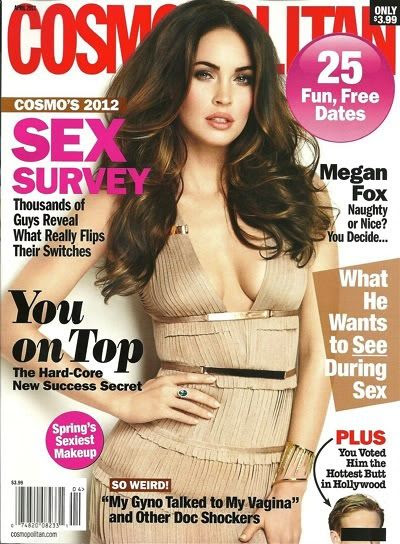 White cover! Megan Fox! Bizarre giraffe neck pointing a whole different direction than her head, as per Cosmo standard practices!  "Megan Fox: Naughty or Nice? You Decide..." Cosmo, I don't know her!  "What He Wants to See During Sex!" I thought the answer was "a naked person" but it turns out the Cosmo answer is "his own penis"!  Too bad, because having sex can make it really hard to see your penis!


[in the letters section] Wow, the February story "Deadly Decisions: How Smart Women Put Themselves at Risk" opened my eyes. No way will I be heading home alone at night anymore."

...And if your friends all leave before you then I guess you have to sleep at the bar.


The Naughtiest Thing I've Ever Done: "I hacked his email and then hooked up with his friend"

Cosmo always runs these "Naughtiest Thing" stories and they're always incredibly fucked up.  The one last month was about a girl gaslighting her roommate by secretly moving the roommate's car to illegal spots.  And this month it's about a girl who steals her boyfriend's password (like you do) and finds out that he's cheating on her, so she books a plane flight to the guy's long-distance-best-friend to fuck him.  Without telling the best friend.  I don't mean without telling him about the cheating, I mean without telling him anything.  Her first contact with the guy is a text from the airport:


"I've got the lace panties covered. You might want to pick up some condoms this weekend."


Researchers found that the vibration of women's voices are more complex for men to hear, so dudes end up using the part of the brain that interprets music. Translation: You have to be direct, since he may be at a biological disadvantage when it comes to listening--and processing--what you say.

[listening closely, you can make out a strange warbling tune that sounds oddly like the words "FUCK YOU."]


[signs your friend-with-benefits wants to date you:] He lingers in bed postbooty for cuddle time. If he's only in it for the s-e-x, he'll nearly leap off the mattress when you're finished.  Sticking around shows he's into you for more than your bod.

Okay, I get that there are some people who just don't enjoy cuddling, but not cuddling because you think it'll mean you're getting attached? Actually kind of a giant dick move. Guys who spend the entire time trying to keep you at arm's length and protesting "BUT I'M NOT YOUR BOYFRIEND" make terrible fuckbuddies.  If you don't have the maturity to trust that your "this is just sex, kay?" negotiations were real and that women aren't all secretly trying to entrap men in their relationship-tentacles, you don't have the maturity to be a fuckbuddy.

This feature is amazing, because it's not so much misogynistic as just... strangely unfamiliar with basic Earth activities.


Long baths: Lying in a lukewarm tub of your own filth? No thanks.
Bed skirts: Your mattress doesn't need cute clothes.
Emoticons in texts: Typing eight frowny faces after telling us you're running late doesn't make us think you're really sorry. It makes us think you're an emotional wreck.

And so on.  Other impossibly girly things he doesn't get: brunch, tote bags, space heaters, bobby pins, phone cases. I've seen a million "ha ha, frivolous feminine things" articles, but this is the first one to just start naming random household objects and activities.  He's overdoing his misogyny so hard he accidentally overshot women and hit the entire human race.

...Which is a pretty good description of Cosmo in general.

But wait... there's more!  Unfortunately.  But I have an anatomy midterm so I'll finish this later.
(Anatomy: Come on ladies, having body parts? Really? Grow up!)
Posted by Cliff Pervocracy at 1:12 PM