[This time I have a really good excuse for not posting!  Namely that I was very busy lying in the sun by the shore of a beautiful lake in the woods, and one simply cannot blog when one is vacationing that hard.  And before that I helped Rowdy move into and paint a new apartment.  So. Been busy. But also been a bad, bad blogger. I have a lot to say by now so I'll try to get back on track.] 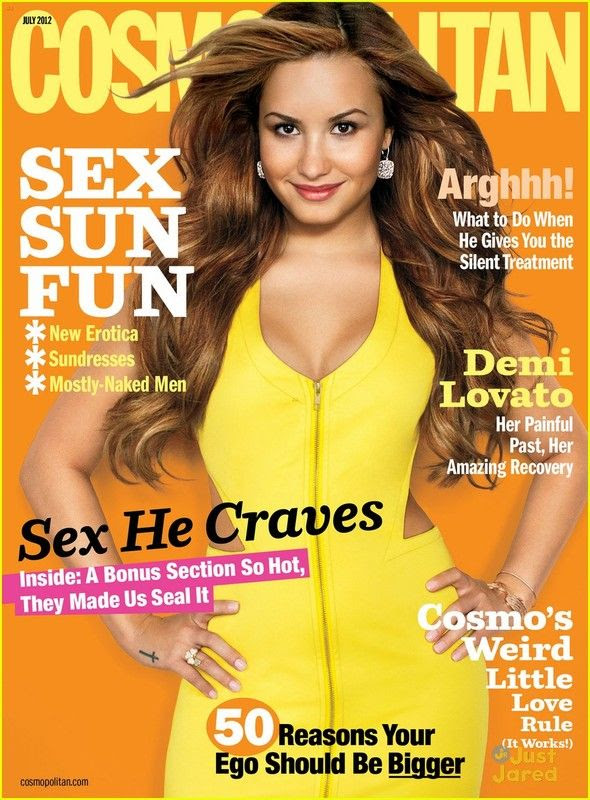 Orange cover! Demi Lovato! Wearing an always-fashionable Zippered Cutout Unitard/Dress/Swimsuit... Object!  Her interview is about her struggle with eating disorders, which makes it totally appropriate and respectful that Cosmo has Photoshopped her to be skinnier!  "A Bonus Section So Hot, They Made Us Seal It"!  Who exactly is "they"?  There's no central magazine censorship organization!  Some retailers might reject certain content, but if they rejected explicit sex discussion I'm pretty sure they wouldn't carry any issues of Cosmo!  It's almost like this is a goofily dishonest gimmick!

But maybe there's something super scandalous in there, right?  So let's rip off the little seal on the "A Guide To His Package" section, and we get...

Oh for fuck's sake. This super duper secret sexymicious section can't even say "dick."  (And no, of course, there are no pictures of any interest.  There's a picture of a Sharpie marker, though, along with a claim it represents the size of the average erect penis.  I hope they mean lengthwise.)  I know this magazine is largely aimed at teenagers--which makes their terrible view of relationships more harmful, not less--but I'm guessing they don't go to a public high school if they're shocked by words that rhyme with bad words.


Men feel about their penises, I imagine, the same way you feel about your breasts.

No, actually, I have this thing called a vagina, thanks.

Breasts are important erogenous zones for lots of people (including me!), but equating breasts with penises is depressingly common, and seems to stem from two wrong-headed ideas:

1) Things that stick out are the important bits!  Vaginas are all hidden away and mysterious, and thus couldn't possibly be an important part of a person's sensuality or body image.
2) The stereotypical heterosexual man finds breasts more attractive than vaginas.  Therefore, women must find their own breasts absolutely fascinating.


Kinky sex is being sensationalized right now, but there's nothing new about dominant/submissive scenarios in women's fiction or in real-life women's fantasies.  Here's why: Submission is a primal urge, likely linked to our need to function in groups. It helps us accept authority. However, we also possess instinctive dominant urges, which allow us to take leadership roles.

Also: SEX.  This stuff is (largely) about SEX.  It is not just about how I want a man to boss me around.  It is about how I want a SEXY man to boss me around in a SEXY way because that will stimulate me SEXUALLY.  Don't subtract that from the equation.  "I want to be sexually submissive because that's my fetish" is a very very different thing from "I want to be submissive because I don't like making decisions or having power."


Sexy: Skating with your pup [picture of a man on a skateboard walking a dog]

Skanky: Showing your pups while walking your dogs [picture of a woman with large breasts wearing a tank top and walking two dogs]

They're not removable, Cosmo.  Maybe she would've very much liked to leave her breasts at home when she walked her dogs, but, y'know, not really an option for most people.

It's bad enough to declare behavior "skanky," but saying someone's body (and, I guess, the fact that she dressed in a way that made her body visible) is skanky--that's fucking... skeevy.


Let him initiate [asking you for your number]--it makes him feel manly to be the one picking you up. But make it easy for him by giving a few hints that you'd willingly offer up your digits. [...] If you're chatting about, say, bowling, tell him, "I love to bowl, but none of my friends ever want to go."

Here's the problem with this:
She: "I love to bowl, but none of my friends ever want to go."
He: "Gosh, that sucks. I hope you find some good bowling buddies!"
She: Thinks he's just given her a stinging rejection.
He: Not knowing that he was playing a secret game all along, thinks he's just politely expressed sympathy that she can't pursue her interest in bowling.

I did that for a while.  It sucked.  Now I (try to) do this:
She: "I love to bowl, but none of my friends ever want to go. Hey, maybe we could go bowling sometime?"
He: "YOU BRAZEN HUSSY, YOU HAVE DESTROYED MY MANHOOD!  NOW I HAVE TO BE A WOMAN!  THAT'S VERY INCONVENIENT!"

This is a big article on finding your "10% guy", the idea being that you should choose a guy who likes you 10% more than you like him, so you'll have all the power in the relationship.  So that's kind of creepy.  But it goes from creepy to sad when all the examples sound less like a guy who's smitten with you, and more like a guy who cares about you at all.  He calls when he says he'll call? He doesn't play games with your affection?  He treats you like he likes you?

The article's also full of "this will be hard for you because you're not hard-wired to like Nice Guys" bullshit about how women are naturally programmed to go for guys who don't give a shit about us, but we need to break that programming!  Oh for fuck's sake. I don't even want to deal with this bullshit.


If something makes a man feel insulted, controlled, criticized, or backed into a corner, it shifts him into thinking emotionally, which isn't his strong suit--data transmits less quickly between the right and left hemispheres of the male brain, making it harder for men to process reason and emotion simultaneously.

...And that's why men can't move their left and right hands at the same time!

No, ha ha, of course I'm only kidding by implying that "brain hemispheres" are actual body parts with non-fuzzy-wuzzy functions.  Really, that's why you should never subject a man to anything so cruel as disagreement or boundaries.

I think I've figured out the Cosmo view of masculinity: Masculinity means being strong and resilient, but men's sense of their own masculinity is weak and fragile!  So it's women's job to carefully coddle and prop up men's feeling of strongness at all times.  Women's reward for going along with this charade is... er... um... I'll get back to you on that.


Invite your best girls over for a music video-worthy carwash. Put on your sexiest cutoffs, grab some sudsy water, and give your wheels a washing.

"Hey ladies, want to come over and wash my car for free?  It'll be a blast!"


About an hour before you get dressed, pop your panties in the freezer. Then slip them on just before you head out the door--you'll have the right kind of shivers in all the right places.