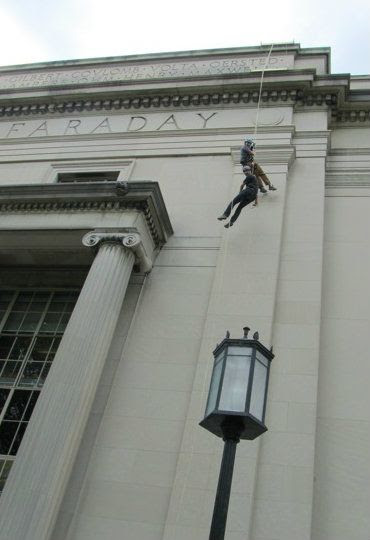 When I worked on an ambulance (this is my personal "one time in band camp"), we were at a nursing home, dropping a patient off after a routine transport, when we saw something disturbing.  A nurse was giving liquid medication to another patient who was clearly choking on it.  The patient was gagging horribly, the nurse was holding his head in place and forcing the oral syringe down his throat even as he was thrashing and making drowning noises, and after she finished she walked away even though he was coughing up medication all over his pillow.

My work partner and I saw this, and, with that creeped out feeling of "did I just see what I think I saw?" and "something's not right," we... left and took another call and went off to the hospital.  Then we grabbed some lunch.  Then one of us--I don't even remember which one--blurted it out.

"That thing at the nursing home... you saw that too, right?  That was kind of fucked up, right?"

Those two sentences started the chain of events that lead to us filing a formal elder abuse report.

When we see something going on that's Not Right, often we face ourselves with a false dichotomy--either do The Right Thing, confront them or call the cops or blow a whistle... or do nothing because you blew it.  And doing The Right Thing can be hard if you're not sure that what you saw was wrong, or real, or any of your business.

It's easy to judge people for seeing something horrible and not responding, but I think most of us have been there.  We've been in that nail-biting state of being horribly distressed by what we saw, but unable to act in the moment--more afraid of making a fuss over nothing than about letting someone get away with something horrible.  Sounds stupid when you spell it out.  But it's a real state that humans are really subject to, and saying "well, don't do that" doesn't fix it.  I wrote about one of my experiences here.

Here's another one: I went to a Jewish summer camp one year when I was a preteen.  On the bus ride back, I heard the administrators telling all the boys from the eight-year-olds' cabin not to tell anyone about Counselor X.  Especially don't tell anyone about how he touched your butts.  Otherwise we won't be able to have camp next year and it'll be all your fault!  You'll ruin it for everyone!  You don't want that!

I was young, but I was not so young that I didn't know exactly what they were talking about.  But I didn't tell anyone.  Mostly because I had this sense of "it couldn't be."  I thought it couldn't really be molestation because molestation is a big serious deal and this was just some confused boys and a counselor who looked like an ordinary guy and everything seemed really quiet and normal except for those few sentences I overheard.  I managed to convince myself that the counselor had done some things that might sound like molestation, but obviously weren't, but if the boys told anyone then the camp might be shut down because of a misunderstanding.

I know how fucking stupid that sounds.

So I don't wish that I'd called the cops, or told my parents, or CPS or anything.  Not directly. I wish that I'd turned to one of the kids sitting next to me on the bus and gone "did they just say what I think they said?"

Next time you see something that seems wrong, but "oh my gosh maybe not really maybe I shouldn't say anything I don't know," you don't have to go right to the cops or the boss or run into the situation with your fists up.  What you do have to do--this is a goddamn order--is tell someone about it.  Someone as confused and powerless as you are.  Just check in.  "This seemed off to me, does it seem off to you?"

Sometimes it isn't even about how the other person reacts.  Sometimes it's just about putting it into words.  You hear yourself describe the situation and you realize what you're describing.

Sometimes it's just about taking a step, even if it isn't the perfectly right step, that makes you realize you are allowed to act on this; now that you've done something you can do more.

And sometimes they look back at you and say "yeah, that was fucked up. I was thinking the same thing but didn't want to say anything.  You think we should go tell someone about it?"

And that, two people realizing they're not the only one in the universe who has a problem with what's happening, much more often than any spectacular act of lone-hero courage, is how evil gets dragged into the light.


[Wow, I've been writing a lot of dark shit lately. Which is partly a reflection of things that have been going on in my life--working in an ER and dealing with ugly scene politics doesn't always prime you to see the good in everyone--but nonetheless, it's not all I want the blog to be.  I'll try to write something positive about sex next.]
Posted by Cliff Pervocracy at 11:26 AM