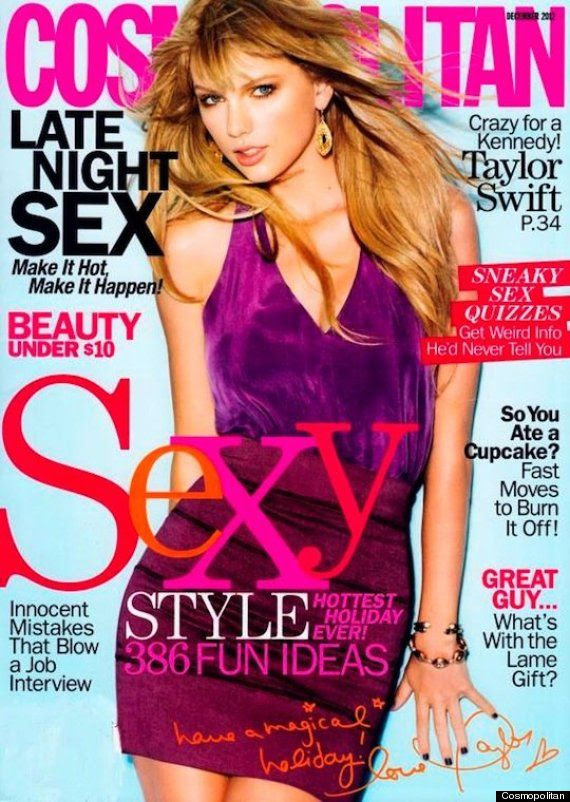 It's that time again!  Light blue cover!  Taylor Swift!  Wait, that's supposed to be Taylor Swift?!  I know what Taylor Swift looks like!  She doesn't look a damn thing like that!  Also they made one side of her neck longer than the other, and her left collarbone seems to reach well past the midpoint of her chest!  I never thought I'd have to critique the anatomy in a photograph!  "Late Night Sex!" If Cosmo runs headlines on "Early Morning Sex" and "Mid-Morning Sex" and "Elevensies Sex" and so forth, they could get a whole year's worth of content out of this!

(Cosmo has bizarre neck errors on almost every cover.  Apparently they always use the same person for retouching, and this person believes that human heads are set on an infinitely mobile ball-joint located on the front of a foot-long neck.  If we can't convince Cosmo to stop selling crude gender stereotypes as "science" and joyless performance as "sexy," maybe we can at least explain to them how spines work.)

(TW: ED) So You Ate a Cupcake? Fast Moves to Burn It Off!

And then there's this headline.  I just... this is really heinously irresponsible.  I know people get all argumentative about whether beauty standards promote eating disorders, but how is this headline about anything but eating-disorder behaviors?

"So you ate a cupcake?  Great!  That will contribute to the nutrients your body needs each day for healthy functioning!  Plus they're yummy!  On a totally unrelated note, moderate exercise can make you feel good and increase your physical abilities, but really shouldn't be connected to feelings of guilt for enjoying food!"

I'd just started dating this awesome girl who didn't eat meat, so I decided to take her to a sushi restaurant. She ordered a tuna roll and seemed into the place... until the chef came out with a live tuna and chopped its head off at our table. My date was horrified as the beheadings continued at tables around us."

A weirdly racist "true embarrassing story," from a writer who clearly doesn't know how big tuna are.    For reference, here's a video (warning: NOT A PRETTY SIGHT) of someone beheading a (dead) actual tuna.  That would make one hell of a tableside presentation...

Worst Date Ever! He Was Bisexual... With a Girlfriend!

Okay, so the "girlfriend" thing is legitimately terrible, since he was cheating on her.  But the biphobia here is really gross:

We headed to a wine bar, where, over a glass of merlot, my date matter-of-factly informed me that he also hooks up with men. I consider myself pretty open-minded, so that bit of info itself didn't bother me--it was his timing.  At this point in the night, we were supposed to be all flirty and into each other.  I figured he'd mistakenly thought it would impress me, so I politely laid it out for him: "I understand that a guy can picture a girl he's dating making out with one of her girlfriends and get turned on by that. But for me personally, picturing a guy I'm dating going at it with his male bud is not a turn-on." My date seemed confused.

I, too, seem confused.  A guy comes out to you, and your response is, and I'm trying to work this out here: "I'm like totally not biphobic, but this was Designated Flirting Time in my head, so clearly every sentence he said was supposed to turn me on, and men having sex with each other doesn't turn me on, so I'm totally justified in framing his sexuality as EWW MANSEX LOL AMIRIGHT LADIES."

Meanwhile, as if on cue, a man who'd been sitting near us at the bar turned toward my date to ask him a question. My date, without hesitation, flirted back.

Come ON.  What kind of fucking sitcom logic is this?

Although if you view it not as "and then he did gross bisexual stuff right in front of me, OMG" thing, but as the other man overhearing that bullshit and heroically rescuing him from his biphobic date, that's kind of sweet actually.

The High-Maintenance BFF: Even the best of friends can come with baggage.

"We went on vacation together, and on the first morning, she broke her leg jumping on the hotel bed (don't even ask). I ended up pushing her in a wheelchair all over Paris. At times, I'd be so exhausted that I'd end up crying at night. But I didn't want to make her feel worse, so I stayed quiet."

Wow, what a jerk, inconveniencing her friend by, um, not walking on a broken leg! Talk about inconsiderate!

Does Your Coworker Want to Sleep With You?

If he writes something like the note on the right, it's 99.99999 percent likely that he's already pictured you in the nude.

You're on a second date with a guy when he asks about your previous relationship. You say:

A. "He deserves to be in jail. Know a good lawyer?"

If you answer A (or B), the quiz reports you aren't over your ex.  C means you're over him.  Now, I can sort of see the logic here, but... shouldn't the actual events of your previous relationship have some bearing on this?

Not every "he deserves to be in jail" is poorly sublimated grieving, destined to turn to "solid guy" once you get ahold of your tempestuous lady-emotions.  Sometimes it's because dude committed a bunch of crimes.
Posted by Cliff Pervocracy at 11:36 AM