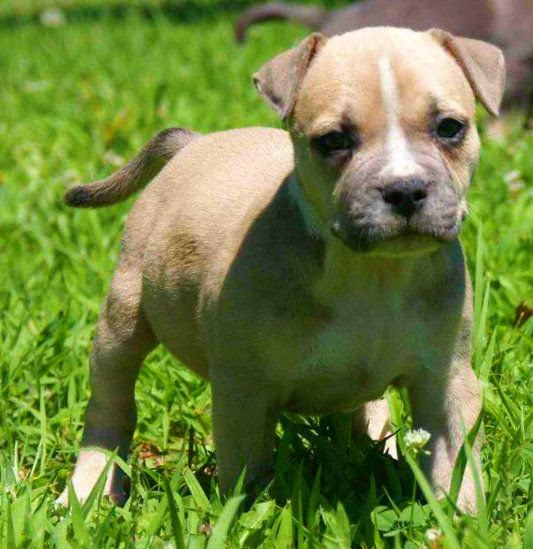 I just got back from Christmas with Rowdy's family!  It was happy and cozy and his parents cooked like they were fattening us up to eat us.  And Rowdy gave me a 350-million-year-old fossil trilobite for a present. It was good times. I hope you all had good times in your own ways as well.

Rowdy's sister and her husband stayed with the family as well, and they brought a puppy with them!  An adorable, hyperactive, cuddlywuddly, toe-nipping little puppy!  (They were claiming it was an "Olde English Bulldogge," but it was clearly not.  We're guessing boxer-pitbull mix.  Cute, whatever it was.)  This struck Rowdy a little bit odd, because his sister never liked dogs.

So Rowdy asked his brother-in-law what was up.  He said, laughing, "Your sister said the only way we'd ever have a dog is if I'd already brought one home and she had no choice.  The next day, I brought home the puppy!"

Concerned, Rowdy asked his sister about this, and she said, "Oh, we talked for a long time about getting a dog and we agreed we'd do it around now.  I didn't use to be a dog person, but I love this puppy!"

The brother-in-law had been kidding, but the weird thing is, he was kidding in a way that made him sound like a kinda scary asshole.  He would've come off as a much better person if he'd told the truth.  So why did he make up this story about forcing an unwanted burden on his wife?  And why, on some level, does the fact that he made up the story not really bother me, but strike me as a pretty ordinary bit of humor?

There's this widely told jokey narrative that marriage is a state of passive-aggressive warfare where the wife has to be pressured into allowing fun things and the husband has to be nagged into doing responsible things.  People in relationships, good and bad, joke about getting along like the Lockhorns.  See also: every sitcom ever, every issue of Cosmo ever, every social gathering where "my husband is such a manchild/my wife is such a ball-and-chain" is a joke about as edgy as "airline food tastes bad."

The problem is, it's not a joke for everyone.  It's one of those insidious things that hits some people as "ha ha, yeah, I kid about him being a manchild, but really we talk stuff out," and hits others as "so I see, husbands are supposed to be irresponsible and you're supposed to berate them for it."  Even though Rowdy's brother-in-law wasn't really coercing his wife into a major responsibility she didn't want, he was cheerfully playing into a story created by, and validating for, men who really would.

Credit where credit's due, this is Rowdy's theory: One of the major steps toward creating a consent culture is making consent look different from coercion.  It's making a man who respects his wife's right to participate in decisions sound so different in casual conversation from a man who doesn't, that no one could confuse them.

Because our values aren't that screwed up, really.  If you ask people, point-blank and not-joking, if a man should listen to his wife when making a decision that affects her life, people are going to say yes.  Most people--even most not-at-all-feminist people--are going to say, yeah, of course that's basic respect.

So imagine a world where it was really, really obvious who respected their wife (husband, partner) and who didn't.  If people who respected their partners never told these maybe-jokes, people who didn't wouldn't have that maybe-joke plausible-deniability to hide behind.  They'd either have to tell outright lies (which some would, but it would require them to be consciously aware that they had something to lie about) or their "she didn't want it, but I did it anyway" story wouldn't be jokey, it would be a straight-up confession of evil.