[Wow, already? Is it just me or is this one really early?  I know Cosmo always runs a couple weeks ahead of the title date, but this seems extra soon.  Maybe they're trying to get their ads out in time for the shopping season.] 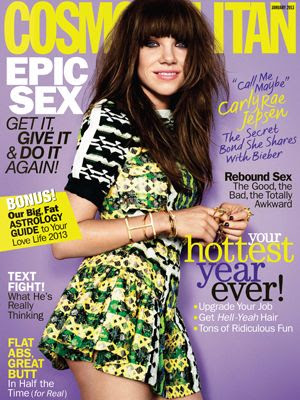 Purple cover!  Carly Rae Jepson!  "Call Me Maybe" written next to her head in case you've already forgotten who Carly Rae Jepson is!  "Epic Sex!"  Wow, so that's how long it takes a meme to trickle down from World of Warcraft to Cosmopolitan!

I joined a social bowling team--mostly for the cheap beer and the girls--and this one guy was super-competitive. He'd make fun of the girls, in a mean way, whenever their balls went in the gutter. One day while he was in the bathroom, I replaced his ball with an exact replica that was twice as heavy.  When he came back, all his shots went into the gutter.

Okay, I guess we can add "bowling balls" to the increasingly enormous list of commonplace subjects Cosmo is not good at lying about.  (Hint: Adult sizes range from 10 to 16 pounds.)

[Woman finds out her boyfriend is cheating on her using hookup websites, which for some reason he's paying for.] Luckily, I also happened to see that his credit-card number was saved in his account info on one of those sites. So, to get back at him, I upgraded his monthly membership to the most expensive plan, the Platinum Membership.  Then I dumped him.

He texted: "Hey, what are you doing?"  He means: If he doesn't follow up with an invite, he's just checking to see if you're available. This is a text guys use to keep you interested without expending time or energy.

He texted: "Out at a party; I'll see you later."  He means: He has no real intention of seeing you later, and if he does, it'll be on his terms only.

Aaaand suddenly Cosmo is the mean girl in high school trying to break up relationships by telling both partners, "Oh my god, did you hear what Jesse is saying about you behind your back?  I'm only telling you this because I care about you and I think you ought to know..."

For shame, Cosmo.  Even if he dumps me, he'll never ask you to prom.  You're just not his type.

Oh baby.  Don't you want to diversify that big, aggressive portfolio with my liquid assets?  Tickle my small-caps, and I'll lick your FDIC.  I'll never short-sell you as long as you can handle my back-end load.

Take your love to an epic level [...] upgrade your love.

I can't do justice to it in quotes, but this is a whole article about how the hot new love is "epic love," and you are currently not having epic love and you must have epic love. The whole thing is written like a fashion piece--here's how to style your emotions like the stars, just in time for the holiday season!  (I'm not kidding, they have celebrity photographs modeling appropriately epic love.) You don't want to be the last one on the block still in regular love!

"Honey, we're loving wrong.  It's no good.  We have to love harder.  The magazine said so.  I'd say we need to love... about twenty percent harder."

Q: I am traditional and won't have sex until things are really serious. How do I handle the third (or fourth or fifth) date and let him know that even though I'm really attracted to him, I'm not there yet?

A: Drop not-so-subtle hints, and avoid situations that'll make him think sex is imminent. [...]  Or just come out and say, "I'm pretty traditional when it comes to waiting to have sex."  Now, it's very likely that initially he'll think he'll be able to turn you into a sex fiend by date three--it's that kind of bravado that allows men to charge into battle during war and approach women in bars during happy hour--which is why you then need to back up your words with action.  Or really, a lack of action.  Cut off make-out sessions at a point when most of your clothes are still on so that things never come to a head, so to speak, and so that it doesn't seem like you're torturing him just for fun.

Okay, this shit is normalizing rape.  Quietly.  It's just gently implying that if you get in too sexy a situation, well, your wishes regarding when to have sex might not get respected.  Because guys have a lot of bravado and all.  Things might come to a head, so to speak.

In a weird way, this upsets me more than when Cosmo publishes generic "don't go outdoors without a male escort" rape-prevention advice.  Because even though that's misogynistic and victim-blamey, at least it admits that what they're preventing is rape.  Here, it's just... you know, sex you didn't plan to have.  And that's normal. Fuck, Cosmo.

Q: On a first date, I'll always do the wallet grab, even though I'd be turned off if he wanted me to pay.  Do guys know it's an act?

A: Yes... but that doesn't mean you should stop doing it. [...] There is a trick to doing the wallet grab without giving him the wrong idea that you actually want to split the bill.  [...] Let him make the first move for his wallet. When he does, reach for yours, and silently continue going through the motions of paying until he stops you.

Every time people tell me that explicit communication between partners seems like it would be awkward or not spontaneous, I'm linking them to this quote.  I'll show you awkward and non-spontaneous.

Also, just throw in half, cheapskate.  The rule is halfsies on the first date, alternate on subsequent dates, pay proportionate to your incomes in a long-term relationship.  I'm sorry if this impedes your dinner-check-related arousal, but hey, my rule's better because it also works for gay people and people who aren't sexists.

To end things on a not-completely-terrible note, hey, Cosmo published an article by a bisexual woman!  So that's progress I guess.  It's all about her cheating on her partner with a partner of the opposite gender, so not amazing progress, but I, mean, they're trying here.
Posted by Cliff Pervocracy at 10:48 PM