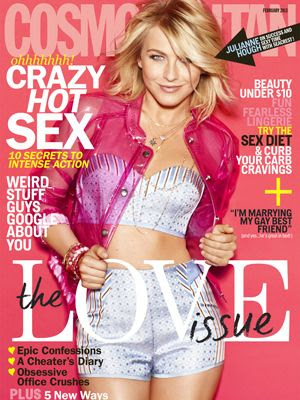 Red cover!  Julianne Hough!  The older I get, the less often I recognize these people!  Not quite sure how to feel about that!  She's wearing a, um, transparent plastic cropped biker jacket and satin pajama-underwear-swimsuit... I have no idea what kind of clothing that is!  "Weird Stuff Guys Google About You!"  Believe me, Cosmo, you have no idea!


"A few months ago, my friend asked me to volunteer at a homeless shelter with her--and ever since then, I've been dreaming of opening my own.  I'm so inspired!  I want to give clothing, food, and love to families who live in poverty."

Errgh.  I mean, it's nice that she has good intentions.  But maybe she could be directing those good intentions toward supporting an existing shelter instead of pulling a "I spent four whole hours there, I totally know how to start this from scratch!" Something about this makes me feel like she's not quite prepared for the reality of people who don't just need love, they need healthcare, legal aid, case management, and advocacy.  If all you've got is love, host a fundraiser and give the proceeds to someone who understands social work.


DirtyRottenFlowers.com will send your ex a bouquet of flowers--chopped up, decaying, and decapitated.

Well, you've got to admire the chutzpah of a florist who realized they could make $29 a bundle for their trash pile.

"When I'm into someone, I don't want to ruin things by having sex with him too soon," says Liz [...] "The problem is, I usually want to have sex with him so badly that I don't trust myself not to go too far with him when we're making out."  So she squeezes herself into her grossest pair of Spanx.  "I have an extra-ugly girdle reserved for really tempting situations."

Other women rely on things like prickly legs, a grown-out bikini line, or even just a good old-fashioned pair of granny panties. No matter your poison, they are all things we like to call fake chastity belts: preventative measures taken to ensure that no matter how tempted you are to have sex, you don't.

1. Having sex with a guy "too soon" ruins everything. Because the last thing a guy who wants to have sex with you wants is for you to reveal that you want him just as much and then have sex with him, because then you'd both be happy, and that's, uh, terrible.

2. If you don't want to have sex with a guy, you have to go take absurd romantic-comedy measures to prevent it.  You can't just decide not to.

3. A woman with body hair or unflattering underwear is so comically unfuckable no man would want her.

4. No, wait, actually I think the idea is that the man would want you, but you'd be so ashamed by your appearance that you wouldn't let him see you even though he'd want you anyway.

5. The article then goes on to give tips about how to make your unsexiness sexy in case you decide to be sexy after all but you're still in your unsexy clothes that you put on to keep yourself from being sexy.


Q: My guy wants to come on my face. How do I even respond?

I needed a breather before I got to the next reprehensible article, so here's something merely inexplicable.


Can Sex Make You Skinnier?

Carboholism. As much as it sounds like some fake word the diet industry came up with, I can assure you, it is a very real affliction.

Yes.  The fact that you are alive and have a metabolism fueled largely by glucose is a very real affliction.

I joked once, long ago, that one of these days Cosmo was going to tell us the Krebs Cycle was unflatteringly unfeminine.  I never expected them to call my bluff.

Anyway, I had a long quote from this article typed up but it was fuck-all boring, so I'll sum up: writer goes on diet where whenever she wants to eat life-sustaining amounts of food, she does something sexual instead.  (Sometimes the "something sexual" is watching True Blood, or begging her husband to sexy-text her, which he does grudgingly.)  The diet holds up for five whole days.  But it's, y'know, totally an awesome idea that 18 million readers had to hear all about.

Spoiler: by "gay," she means "identifies as gay but attracted to some women."  Which kinda changes the whole story from "wow, you better explain why that isn't a terrible idea" to "um, good for you?"

It would be cool if Cosmo used this to discuss how fluid sexuality can be and how people can defy definitions and find happiness in unexpected ways, but they do not take it in that direction.  They take it in this one:

Dating a gay man has its upsides. [...]  While I wouldn't call myself a slob, Dave basically organizes my whole life.  When we're out shopping, he knows when to ask "Will you really wear those shoes?" He's not just my date to weddings: He helps me pick out the perfect dress and even does my hair."

All of this is very nice, I guess, but also very "Gay man make adorable sassy little pets for straight women!  And I got to take one home!"


Go to Best Buy or a specialty audio shop, and ask someone there for a home-theater surround-sound system (warning: a really good one will cost you up to $500).  Say it authoritatively or you're going to get upsold.

I'm pretty sure you're going to get upsold no matter how authoritatively you say that.

(Later, they describe a subwoofer as "a square box that magically balances the sound.")


Touching the strippers is against the rules in clubs, although no one is going to throw a woman out for brushing a thigh or boob.  Because from a woman, that illicit touch manages to be both sexual and sweet.  Instead of doing it with a sleazy grin, like a guy might, women cheer and laugh.  An inquisitive graze resembles a high five at a sporting event between teammates.  Among the female patrons and dancers is an undeniable spirit of camaraderie, like the whole thing is so absurd, they all have to laugh.


"In our society, the last thing a young woman wants is to be perceived as uptight, humorless, and jealous," says Hugo Schwyzer, who teaches gender studies at Pasadena City College and speaks nationally on gender issues.  "Getting a lap dance assures a man that you're none of these things."[...]

"Women aren't turned on by male strippers, because they're always presented as a caricature," says Schwyzer.