My boobs want to be free. 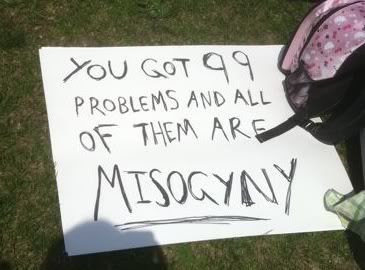 It's getting to be hot out these days. Swimming weather, sunbathing weather, Frisbee weather. Lots of guys running around shirtless. They look so carefree, their burns and tans, abs and guts, open to the sun and the wind.

Me? I gotta wear a shirt. I got shame on my chest.

The frustrating thing is that this isn't even a legal issue, not really. Female toplessness is legal in a lot of places in the US (although not where I live), and I'd be meeting the letter of the law with a couple of Band-aids. But I have a gut feeling that if I go anywhere that there are people--and particularly anywhere there are children--nobody's going to be too happy about my Band-aids. The enforcement is social; women just don't go around topless in the US.

It bothers me because it's unequal, but it also bothers me in its implications: that my body is inherently sexual, and a man's body isn't. It feels like men are being viewed through the first-person lens of "it's nice to feel the sun on my skin, and I don't mean anything by it" and women are being viewed through the distinctly third-person lens of "it's inappropriate for me, a heterosexual man, to see her sexy parts." It ignores the experiences of people who are turned on by male chests and somehow manage to contain themselves when they see one.

And hell yes, it does bother me that it's unequal. I don't want to gloss over that. I don't know how we can act like gender equality is a big deal in this country, then turn around and claim that the same body part that's innocuous on men is obscene on women. That's glaring discrimination in the plainest form: treating one group differently from another for no reason but custom.

This is a sex blog, but this isn't really a sex issue. Or shouldn't be. I don't want to do stripteases in public, to caress my breasts or twirl tassels on my nipples. I just want to be able to go "whoof, it's hot out" and peel off my shirt. This isn't about my breasts; it's about my chest.
Posted by Cliff Pervocracy at 2:36 AM