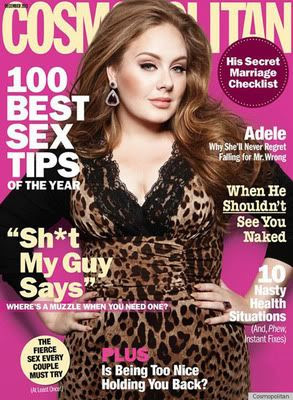 Pink cover!  Adele!  Oh my God there's a woman over 120 pounds on the cover of Cosmo oh my God!  I'm vaguely insulted they put her in leopard print because maybe I'm reading too much into this but I feel like leopard print is kinda code for "She may be fat, but she's fabulous" in a condescending sort of way!  "When He Shouldn't See You Naked!"  Hopefully this will include when you are in public or meeting his parents!  Unless his parents are nudists, then it's only polite!  "Shit My Guy Says: Where's a Muzzle When You Need One?" Oh no Cosmo no Cosmo no!


The Naughtiest Thing I've Ever Done: "I hooked up with my professor!"

[Ending line:] Peter and I ended our fling soon after I graduated. I knew it wasn't right, but hey: My school prides itself on cultivating close student-professor relationships.  Let's just say it succeeded. Oh, and I got an A in the class.

The whole article is written in that sort of smirking ain't-I-a-stinker tone.  Which nicely avoids the real issues involved, which go way beyond "it's so naughty."  Like: what would happen if you wanted to stop seeing him while you were still in the class?  Is this why you didn't break it off until graduation?  Would you consider adding a line or two about how this generally isn't a good idea when you publish it in a magazine widely read by high-school and college girls?


[How to tell if a guy is lying about his "number"]
-He grabs an object, like his pillow.
-He repeats the question.
-He bites his lip.

...So, basically, if your boyfriend is lying to you, he'll start speaking like Kristen Stewart.  (Actually, the pillow-clutch is just silly and the question-repeating is "cartoon bad liar," but lip-biting can also mean "I'm nervous about how you're going to react to the truth, but here I go.")


Push an exercise ball up against the wall, have him sit on it, and bounce on him.

Another word for those balls is "balance balls."  Because most of the exercise you get from them is due to the added effort of trying not to fall off.  Do I have to spell out the problem here?  Okay, here's another one--most of those balls are rated to 250 pounds.  If he's 180 and you're 120, and you're bouncing, that poor thing doesn't stand a chance.


A study determined that guys lose their desire if they're not mentally turned on.

That must be from the same issue of the The Midwestern Journal of Tautology Studies where they found that people who weigh more pounds tend to be heavier.

Clearly the work of the MJTS's intellectual rival, The New England Journal Of Anally Derived Knowledge.  I don't know about you, but I feel empowered when I'm able to make important decisions and see the things I decided carried out.  I do not feel so empowered when I have a dick in my mouth.  It's not necessarily disempowering or whatever, it's just... I'm having sex.  I'm anywhere on the range of power dynamics that sex can have, which is to say seriously anywhere.

There's a lot of power that women can exert in their lives, in their relationships, and in their sexuality.  "The power to move my head up and down and do that thing with my tongue" is not one of the major ones.

Augh! I'm gonna be late for school!  More later.
Posted by Cliff Pervocracy at 9:51 AM