[I'm heading out of town on Christmas business for a few days.  I hope all the Pervocrats have a merry and, if applicable, sexy holiday season!] 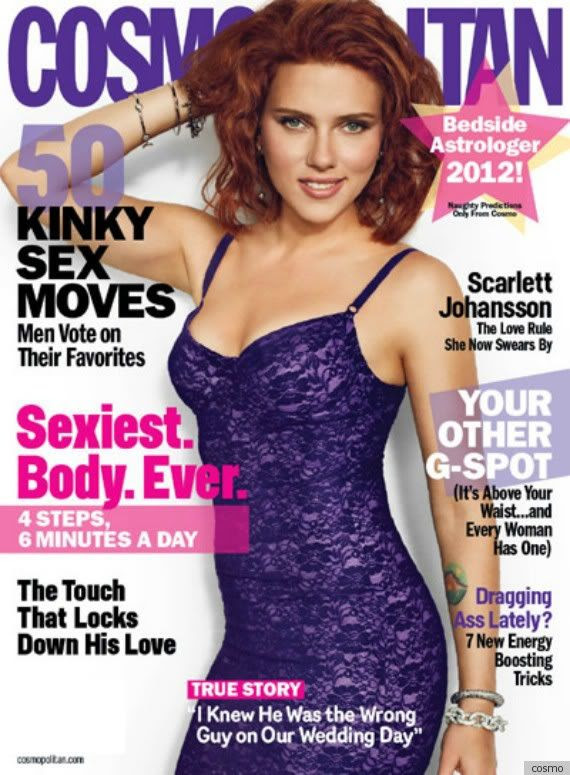 White cover!  Scarlett Johansson!  She's a redhead now so I guess that's exciting if that's the sort of thing that excites you!  "Sexiest. Body. Ever."!  I wonder if the person who write that headline even knew it was a Simpsons reference!  "Your Other G-Spot!" Spoiler: They just mean nipples!  Cosmo is bringing you the breaking new discovery that nipples exist!

I know I complain about this with every issue but I really want to teach the Cosmo cover artists a remedial lesson on How Necks Work!  (Lesson 1: You cannot point your head in a different direction than your neck!)


Q: I have a crush on a taken guy. Should I make a move?
A: It depends--you don't want to lower yourself to home-wrecker status over a rando crush. But if you're convinced he could be the love of your life, tell him "I would never want to break up a great couple, but if things don't work out, let me know."

Also, "rando"?  Really?  "Rando"? I changed my mind; it's totally okay to be a homewrecker if The Amazing Rando is at stake.


If he's stressed... Stroke his earlobe between your thumb and index finger.

Because it's not just bizarre, it also avoids the much thornier topic of how to really help someone who's under stress while still respecting your own needs and boundaries?  Actually, that's a pretty good reason why not.

Sometimes my real problem with Cosmo isn't what it is (sometimes sexist, sometimes harmlessly ridiculous) but what it isn't.  They touch on stuff that could be important, could be a real issue and a chance to learn something real, and then leave their readers with nothing but pop-psych nonsense and gender stereotypes.  I know people don't read Cosmo for in-depth life advice (oh God, I hope not), but at the same time it makes me sad to see a magazine with a circulation over 3 million standing as a grandiose monument to missed possibilites.


If you really want a first date to turn into something more, there's an easy way to avoid any confusion: go home alone.

Right, because in Backwards Land, not showing sexual interest in someone is how you say you want a sexual relationship with them. Also in Backwards Land: the apples taste just like sardines. I know you think I was going to say "oranges," but nope, turns out the opposite of apple is sardine. The opposite of orange is brake fluid. Don't eat the oranges there.

If you don't even ask you won't have even a chance of getting to do something completely awesome, something that lets you see his body and his pleasure in a way you never did before.  You won't even open the door to watching his muscles tighten and his face contort and then feeling his reaction as you take him in your hands and finish the job yourself.

I'm just saying.  It's worth asking.


Before you start 69, lube up your fingers. When you get started, reach up and alternate running your slippery digits over his perineum and the area around his anus.
[icons below indicate: Totally kinky! He never wants to try it!

That's mighty specific for something not to do. Is there some briar-patch shit going on here?


Spice up missionary by rubbing your lacy undies over [your nipples].

Someone, somewhere, is super-seriously planning to rub her underpants on her nipples during sex.  She's picking the pair out and finding a good spot to pre-stash them for easy access and everything. Godspeed to you, underpants-nipple-woman, wherever you are.


"I dated this guy who tasted really funky down there, but I didn't want to confront him about it.  So I told him I was going to suck on a strong mint while going downtown to give him a tingly sensation... which he loved."

I think that tingly sensation is my lunch on its way back up.

You know how when there's an awful smell and you spray air freshener it doesn't really help, it just smells like Country Garden and awful smell?  That's sort of what I picture unwashed-crotch-and-mint being like.


We owe nipples an apology.

Yes, Cosmo, yes you do.
Posted by Cliff Pervocracy at 7:14 PM