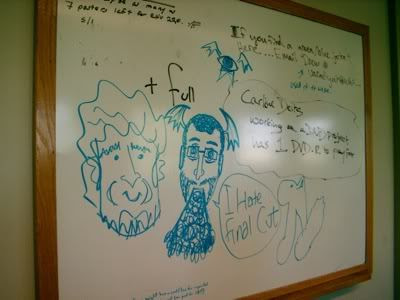 Friday night, Rowdy and I had a pretty major re-negotiation of our relationship.  It was a hard conversation to have, the kind with a lot of sentences like "I want... well, I shouldn't want... but I'll just tell you... I mean to say... nnngh," but ultimately a productive one.  So I figured I'd post the meeting notes up here to give a concrete example of what relationship negotiation looks like.  (A couple items are omitted for privacy, but you get the idea.)  I talk big about this kind of negotiation, but what does it actually look like?

Minutes on 12/30/11 Meeting Between Holly and Rowdy at Boston's Most Generically Irish Pub
1. We love each other super-much. Yay.

2. Because it's not sex but relationships that make me insecure, you will keep me in the loop about your relationship status/prospects with other people you're seeing.
(2b. You are not actively seeking a new partner, but have not ruled out the development of a new relationship, and I am not asking you to rule it out.)

3. I will tell you when I'm uncomfortable or feel ignored instead of just making mopeyface.
(3b. When you're following our agreements and there's nothing I actually want changed, I will not go around making mopeyface anyway.)

4. Because always planning our dates makes me feel unwanted, you will ask me out on dates sometimes.

5. Yep, I'm genderqueer, and I'm not entirely sure what that means, but something along the lines of "I'm still 'officially' a woman and don't plan to change that, but I want to start expressing myself more as a boy."  You are outstandingly understanding and supportive about this.

6. Because both of us feel our current sex life is too vanilla but we've had difficulty developing a repertoire of kinky activities we enjoy together, we will specifically and explicitly negotiate new kinky things to try.

7. We will make an effort to do fun and interesting activities together, because a "shlump around the bedroom all day" date is kind of the relationship equivalent of eating an entire jar of peanut butter in one sitting--tastes good but you just feel wrong afterwards.

8. Neither of us really knows how much time together is good vs. overdose, so we still need to figure out by experimentation how many dates per week works for us.

It's difficult exposing and working on the guts of a relationship--if this stuff comes naturally and painlessly to you, you're probably the Kwisatz Haderach--but God do you feel better afterwards.  The only thing more uncomfortable than making explicit agreements is trying to live without them.
Posted by Cliff Pervocracy at 12:37 PM