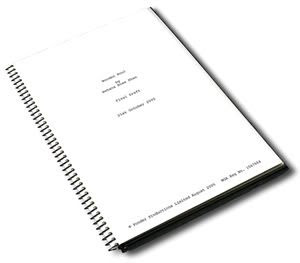 And there's scripts for sex.  Unfortunately, the most common script out there sucks.

The above script is, let me be clear, not rape.  That's not what I'm saying.  What I'm saying is that it's crappy.  It doesn't give people the chance to have any sex besides kissing->groping->intercourse, it doesn't have any emotional component except A's uncertainty how far R will go, and it's just not all that fun.  Even if A is female and R is male, all that does is ease the man's anxiety a bit; it doesn't fundamentally change the story.

And it's "roulette" because it makes consent all about luck.  If you have this kind of sex with a woman and it turns out she wanted it, then yay--by sheer luck, you're not a rapist!  On the other hand, if she doesn't want it, now she has to play roulette--if she says "stop," will he stop, or will he start holding her down?

This isn't just a first-time-sex script, either.  I've had relationships where every time was kinda like this.  It gets abbreviated and informalized a little with familiarity, but it's the same basic scene: guy senses "the mood" is right and guy starts doing his thing unless girl says "stop."  After a while, even if it's totally consensual, it's just boring.

A big problem with getting people to break that script is that they think you're trying to get them to do this one.


Hypothetical Script: Robot Lawyers Consenting To One (1) Act Of Intercourse

Active partner and receptive partner are alone together.  They're chatting, drinking, or watching a movie.  Active partner detects (or wishful-thinks) the whiff of romance/lust in the air.  A breaks into the conversation and asks R, "may I kiss you?" If she says yes, they kiss, although he is careful not to place his hands anywhere not specifically pre-approved.  A breaks off the kiss, ceases all physical contact, stares politely into the middle distance, and asks R, "may I touch your left breast? may I touch your right breast also?" If she says yes, he touches her breasts.  After some silent, tentative, arms-length touching he breaks off again and composes himself before asking, "would you like to have sex?"  If R responds positively, he clarifies: "with me?"

No question, that shit is dull and awkward and probably would work excellently as Vagina Repellent in an emergency vagina-attack situation.  (I'm overstating my case.  I've totally had sex with guys like that. But I'm kinda charmed by awkwardness.)

But the problem with it is not that it's too sex-positive.  The problem is that it's not sex-positive enough. It's still one-sided, it still treats sex like a linear progression from first base to home run, and it still doesn't give R much of a chance to say anything beyond "yes" or "no."  It may include explicit consent, but it's not a negotiation.

The other problem is that it's kind of a strawman, since explicit consent doesn't magically vaporize all your social skills.  People seem to imagine that talking about sex means talking in the dorkiest possible way, and I honestly don't know why.  Personally, I've never seen the romance in no-talking sex.  I know it's supposed to be all "swept off your feet by the heat of the moment" and shit, but in practice it always seems more clumsy and oafish, like trying to convey the concept of "Deleuze's Plane of Immanence" in Pictionary.  With your feet.  There's shit you can't just convey, you know?  Even in long-standing relationships, it's pretty goddamn hard to say "I want to gently pull your hair while we fuck and whisper sweet dirty things in your ear" with raised eyebrows and meaningful looks.

And then you end up taking a chance and just grabbing their hair when it seems like a look has been meaningful enough, and then they stop everything and go "what the hell are you doing?", and boy, you think you've seen awkward.  Even the most stilted negotiation has nothing on the awkwardness of that crushing moment when you're forced to admit you don't have Sexy ESP after all.

So the structure of this post requires me to write a good script at this point. But I'm having trouble coming up with just one, because the essence of the good script is that you're dealing with each other as humans, that you're enacting your sexuality and not some stock scene.  So I can't write you the good script.  But I'll write one possible one.

Partners A and B are alone together.  A detects (or wishful-thinks) the whiff of romance/lust in the air.  A says to B, "You are so goddamn cute, you know that? I'd really like to make out with you."  B answers by leaning in and passionately kissing him.
B puts a finger on A's top button and asks "may I?" with a wicked grin and a raised eyebrow.  He nods and she opens his shirt, touching and kissing down his chest.  "Shall we take this to the bedroom?" she asks, looking up at him, her lips brushing his skin just above the line of his jeans.  A responds by taking her hand and leading her there.  B sits on the bed and starts undoing her clothes.  She pulls A into the bed with her.
"Do you want to have sex?" A asks.
"Oh hell yes," B says, and starts kissing A again.  She brings her hand down to the level of his zipper but hesitates, making eye contact before going further.
"Hang on," A says, "just so you know, I really don't like having my balls touched."
"Okay," B says, "but can I play with your cock?"
"Please," A replies, and she slips her hand into his pants, his answer turning to a groan as she wraps her hand around his cock and begins to stroke.

And you know, so forth.  I'm not trying to make this particular scenario a prescriptive thing.  People communicate in different ways.  What really matters is that you know rather than hope that whatever your communication style is, it's in sync--that the other person is intentionally sending all the signals that you're receiving, and vice versa.  It's also nice to get in a little more specificity, both physically and emotionally, than "sex or not sex."  Also, when you're used to this degree of extremely engaged back-and-forth, it's really obvious when something's wrong or the other person isn't really into it.

For me, this is sexy.  What I remember, what turns me on, isn't just the fact that I did stuff to someone, but that I know they wanted it.  The physical action of stroking a dick is boring, it's just rubbing my hand on some skin, whatever, I can take it or leave it.  What's exciting is stroking a dick that wants to be stroked.  It's so hot to know that for certain.  It's not the dick that makes my night; it's the "please."