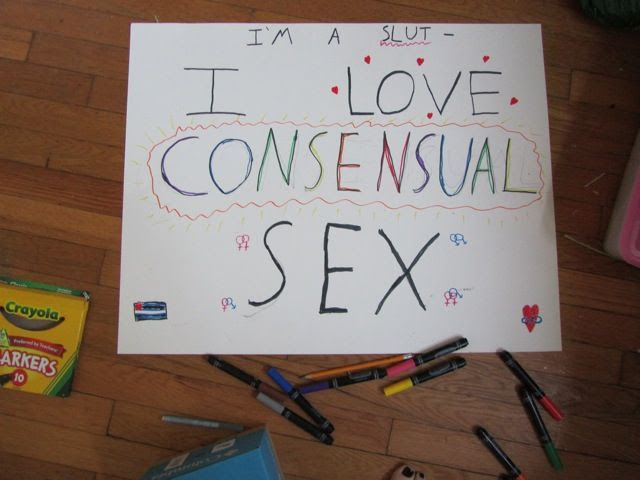 I've mentioned a couple times that Rowdy and I, despite being together almost two years now, always ask for consent before sex.  I feel like sometimes that comes off a little pious, a little bit like this unsexy ritual we go through (or claim to go through) so we can achieve ISO 9000 Consent Compliance or something.

The truth is, though, that it's an incredibly simple and casual thing.  I mean, I ask "honey, do you want to go for a walk?" too; I don't just grab him by the arm and start dragging him down the street.  It's natural to ask someone before involving them in an activity.

We ask in different ways, too.

Sometimes we ask and the answer is "no."  Most of the time we're okay with that and cheerfully go on to other things.  Other times we're not okay with that and we feel unwanted or deprived or frustrated. But those feelings are still better than the way I'd feel if I realized I'd forced my beloved into something he didn't want.

I don't think I've ever made someone stop desiring me by asking.  I've only found out that they didn't desire me.  And holy shit, am I glad I did!  Whether as serious as keeping me from becoming a rapist or as bittersweet as turning sexual tension into "at least I know now," only good things have ever come from finding out someone doesn't desire me.

I've heard people say it's not sexy to ask.  I can't think of anything sexier than knowing my lover wants me.

I've heard people say it's not romantic to ask.  I can't think of anything less romantic than making your lover decide whether they're going to to yell "stop" at you or push you away or tolerate sex they didn't want.

I've heard people say "consent is sexy," but say it in that resigned sort of way, like "safety is sexy," that doesn't really mean it's boner sexy, just it's something they're sort of trying to promote.  I think they're doing it a goddamn disservice.

So fuck yeah Rowdy and I ask every time.  That's not a chore.  That's when I start getting wet.
Posted by Cliff Pervocracy at 11:52 PM