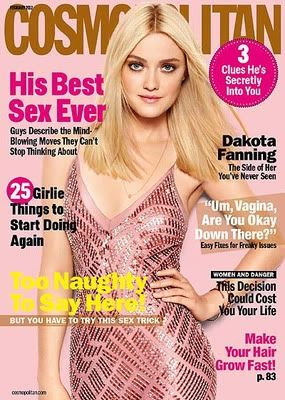 Light pink cover!  With light yellow text!  Shouldn't they run this stuff past a grown-up at some point between crayon-based layout and printing 3 million copies?  Anyway the thing that is "Too Naughty To Say Here!" is 69!  How can that be too naughty?  It's a number!  "This Decision Could Cost You Your Life!"  They mean the decision for a woman to be alone at night!  Because it's too goddamn dangerous for us to live like fucking humans!


The Naughtiest Thing I've Ever Done: "I had sex in the middle of my wedding--twice"

I wanted this to mean on the altar.  That would be a much better naughty thing.  If the minister is halfway through reading them the vows and has to take a break for "for richer or for poorer... oh come on, knock that off!"  And then again during the reception they just swept a bunch of chaffing dishes off the buffet table and started going at it with "I dare you to tell me to stop" looks on their faces.

Instead, though, it means this:


As [the maid of honor] was bustling my dress, John walked in.
"Is everything okay?" he asked.
"Just a minor emergency," I said.
"Can I help?" He wiggled his eyebrows suggestively. Knowing that my maid of honor's vision was blocked by the layers of my dress, I mouthed "Seriously?" He nodded.  We were really going to do it.

This might be a matter of feminism making me all sensitive, but is anyone else kinda sketched by how that went down?  She didn't go "oh yeah," she went "seriously?"  That's the reaction of someone who's being told not asked.  If she was uncomfortable with having sex during the wedding--you know, not "I absolutely will not," uncomfortable, but just "I don't actually feel good about this" uncomfortable--did she have a graceful way out?

I'm not saying it was literally rape.  But it reflects an ucky, ucky view of consent that this was presented as an enviably sexy story.

This is photos of celebrities wearing the same clothing item more than once.  Seriously.  In one case it's shoes.  If it's gauche to rewear shoes, I've been caught eight-hundred-timing.


Guys told us the topics they're dying to quiz you on.. but don't for fear of being bitch-slapped.
"Are you on birth control?"

Dying to quiz you on?  That's a question that's important to ask before sex and utterly irrelevant otherwise.  Unless they're still in some sort of high school mindset that taking birth control means you're a slut who will totally put out, I guess.


[Clue he's secretly into you] His thumbs point up.  A guy is mentally giving you a good review if he unknowingly does something like holding his beer glass with his thumb to the sky.

Oh Cosmo.  There's also one where he's secretly into you if he makes the ASL sign for "I love you," which raises a fascinating question: What if he doesn't know ASL?  Is this some kind of Jungian collective unconscious ASL springing forth?  That could revolutionize our understanding of language and the brain!


Shocker: This Word Is a Turn-Off To Guys
It's not "marriage" or "period." According to our most recent crop of Cosmo Bachelors, it's the F bomb--more than half said it's unattractive. [...] Experts say it's like burping. He knows you do it, but he'd rather think you don't... so you maintain a sexy, girlie mystique.

Yeah... Fuck that fucking steaming mound of fucking bullshit.  I'm a fucking person and I will use all of the words available to fucking people.  I will talk like I fucking want.  I will accustom men to the idea that some women say "fuck" a fuckload and others don't because we're fucking people and we're fucking different.

My ninth grade English teacher tried to convince the girls not to swear by saying "if you say it, people will think you do it."  Slut-shaming aside... so "shit" is still cool then, right?

Probably not by Cosmo standards.  Do you really want everyone knowing you have a digestive system?


Q: I asked my guy to spank me, and he said no. Does he think I'm a total freak?
A: [...] The next time you're having sex, grasp his hand, put it on your ass, and tell him you'll do anything if he gives you a light smack.


If you want to be focused during a big presentation, try this: wear red nail polish. [...] Because it has the longest wavelength in the color spectrum, people might need to look longer to process it, so all eyes will be on you.

The furthest visible red is about 750 nanometers.  Divide that by the speed of light, and you get... 2.502 x 10-15 seconds to view a cycle of red light.  That's 2.5 femtoseconds.  Your audience will be captivated for femtoseconds.

(The human eye and brain take about 1/15th of a second to process images anyway, but we're already so far into the realm of cartoon logic, I hate to even bring that up.)

There is too much terrible in this Cosmo to finish in one entry!  Part Two will be up late today or early tomorrow!  Thanks to Rowdy for color math and @tinam2011 for co-Cosmocking!
Posted by Cliff Pervocracy at 12:11 PM