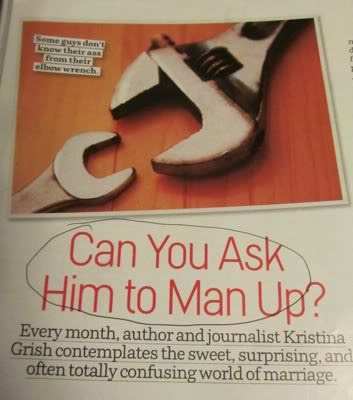 I set out on this ridiculous quest to read every goddamn issue of Cosmopolitan, and now I guess I'm committed.  So let's get on with it!


[My husband's] lack of stereotypical maleness became particularly obvious when a piece of baseboard in our hallway broke off, and he suggested I "just call someone" to fix it. I did; the guy hammered three nails into the wall and was too embarrassed to charge me for his brief time and effort.  When stuff like this happens, I wish Scott would just man up, deal with random repair hiccups, and in general, do more traditional guy stuff.  Why do women like me marry our evolved, sensitive soul mates then secretly wish they'd be more macho?

So now I'm in a Triple Feminist Fury.

Meanwhile in the real world I'm a manly woman who can hammer and cuddle, and I am a whole lot happier than Cosmo would ever let me be.


The move that makes him forgive you: Tilt your head so that you're gazing up, exposing your neck.  This is a submissive posture that lets him know you genuinely understand you're in the wrong.

Are you dating a wolf?


To really up the ante while he's down there, ask him to take your clitoris into his mouth and suck on it--it'll boost the pressure and feel awesome for you.

On its own, there's nothing egregious about this quote.  A little questionable if this should be a categorical imperative--"if this sounds good to you, then try having him do this" would be better wording--but by Cosmo standards it's fine.

It only becomes bizarre in the context of Cosmo (the Costext? no) because it tells women to ask their partners for something sexual.  This is an act all the advice and relationship columns forbid or treat as unthinkable in the first place.  How does "ask him to suck your clit" fit into a world where you can only ask for things via subtle hints and odd body language?  In the real world it's no big deal, but in the Cosmos (yeah, I'm owning that one), you can only ask for a sexual fantasy by leaving a romance novel open on the table or claiming it was a dream you had.  How are Cosmo readers supposed to make requests this immediate and explicit of their partners?  Every other article in the magazine explicitly disallows them the tools they'd need to do so.


Deadly Decision: Ditching Your Friends At Night
[Kenia Monge was a young woman who was abducted and murdered by Travis Forbes.]

[...]Kenia and her girlfriends were partying happily that night. During the evening, she excused herself from their table to go to the restroom.  She left her purse, car keys, and phone with them, giving every indication that she planned to return, according to the Denver district attorney's office.

[...]What went wrong for this girl who seemed to have everything going for her? The alcohol she drank must have blurred her thinking and led her to make the error that endangered her life: breaking away from her friends and leaving the club with a guy--not Forbes--she'd just met.  Minutes later, she was caught on surveillance tapes alone, no longer with the guy she'd left with, wandering between an apartment building and a hotel blocks from the club.

In other words, it was all her mistake.  Travis Forbes was a force of goddamn nature and bears no human responsibility for his decision to abduct and murder her.  Nope, the real problem here was that she took the wildly dangerous action of going outdoors.  How can we ever stop the tragic scourge of women going outdoors?  If only we could keep all the women indoors.  Then murderers would surely go home and go "aw drat, I guess I just can't murder anybody."

Why is Cosmo fucking doing this?  It really pisses me off, not even joking pisses me off, that they're framing this as some sort of suicidal recklessness on Monge's part.  (Hey... why is she "Kenia" and her killer "Forbes"?)  All she did was step outside for a couple minutes.  Forbes is the one who randomly murdered her.  Gosh, which one do you think made the worse decision that night?  Fucking hell.

Oh, okay, maybe she wasn't to blame, but maybe she could have been safer, right?  Maybe if she'd stayed home at her apartment altogether, right?

Something Cosmo doesn't mention: Travis Forbes assaulted another woman a month later.  He raped, beat, and tried to kill Lydia Tillman (trigger warning, everything in that story is horrible and will make you cry) in her own apartment.  What mistake did she make, how did she secretly doom herself?  She was in her home.

I guess it's too horrifying to face the idea that bad people are out there and they can't always be stopped.  (Then again, if Travis Forbes had been caught sooner, Lydia Tillman could have been saved. Talking about what the victims did wrong obscures things like that.)  We want to find some way to say "the victims were stupid, and because I'm smart, nothing bad will ever happen to me!"

The sickest part--sicker than the insult to the victims, sicker than the attention taken off the perpetrators--is that the criminals themselves sometimes use the same logic.  "She should have known better than to be out there alone."  Perpetuating the idea that women who take innocuous actions are asking for trouble isn't just insulting.  It's dangerous.


You find an amazing LivingSocial deal for a tropical vacation. Immediately, you:
A. Decide if it pops up again, it's a sign you should buy.
B. Forward it to your BFFs and ask if they'd be into it too.
C. Enter your credit-card info and handle any pesky details later.

Along with "colors," "the nervous system," "testicles," and "human decency," I think we can add "browser cookies" to the list of things Cosmo doesn't understand.
Posted by Cliff Pervocracy at 12:21 PM