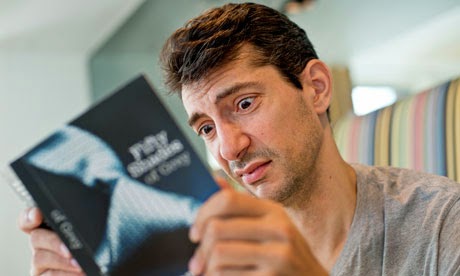 When we last saw our heroes, Stud BeefThud had arranged a really weird gynecologist exam for Ana at his house, because he is rich in the creepiest possible way.


Dr. Greene is tall, blond, and immaculate, dressed in a royal blue suit. I’m reminded of the women who work in Christian’s office. She’s like an identikit model – another Stepford blonde.

I think Ana/E.L. might have some issues with other women.  Just minor little ones.  Like repeatedly talking about how blonde women remind her of soulless identical sexbots.


“Thank you for coming at such short notice,” Christian says. “Thank you for making it worth my while, Mr. Grey. [...] Well Miss Steele. Mr. Grey is paying me a small fortune to attend to you."


After a thorough examination and lengthy discussion, Dr. Greene and I decide on the mini pill. She writes me a pre-paid prescription and instructs me to pick them up tomorrow. I love her no-nonsense attitude – she has lectured me until she’s as blue as her dress about taking it at the same time every day. And I can tell she’s burning with curiosity about my so-called relationship with Mr. Grey.

Taking this paragraph one sentence at a time: There's no such thing as a prepaid prescription.  How do you turn "it's important to take it at the same time every day" into a long lecture?  I don't think a gynecologist is going to be fascinated by the scandalous possibility that one of her patients has sex.


"She said that I had to abstain from all sexual activity for the next four weeks.” Christian’s mouth drops open in shock, and I cannot keep a straight face any longer and grin at him like an idiot. “Gotcha!”

He narrows his eyes, and I immediately stop laughing. In fact, he looks rather forbidding. Oh shit. My subconscious quails in the corner as all the blood drains from my face, and I imagine him putting me across his knee again. “Gotcha!” he says and smirks.


“Do you want to do this?” he breathes, looking down at me intently. “I haven’t signed anything.” “I know – but I’m breaking all the rules these days.”

Somebody missed the lesson on Saying You're An Asshole Doesn't Actually Make It Okay To Be An Asshole.

It's weird how often people get away with this socially.  Like, apparently if you're a jerk that's bad, but if you go "ha ha, I know I'm such a jerk," then it's adorably self-deprecating and therefore okay.  Except it's really not.  It's just a way to say "if you call me a jerk I won't listen or change anything, because I have fully accepted this horrible, horrible part of my personality."


“Are you going to hit me?” “Yes, but it won’t be to hurt you. I don’t want to punish you right now. If you’d caught me yesterday evening, well, that would have been a different story.” Holy cow. He wants to hurt me… how do I deal with this? I can’t hide the horror on my face.

If he's angry he wants to hit her, but if he's not angry, he also wants to hit her!  It's just an endless fountain of hit!  If only we could point him at a turbine instead of a terrified unwilling partner, we could finally have a sustainable energy source!


“Don’t let anyone try and convince you otherwise, Anastasia. One of the reasons people like me do this is because we either like to give or receive pain. It’s very simple. You don’t, so I spent a great deal of time yesterday thinking about that.”

"I spent a great deal of time thinking about how you don't enjoy pain, and I came to the conclusion that this is incompatible with me getting everything I want, so I decided to ignore it.  Aren't I dreamy?"

One of the many nasty things about this book is that it acknowledges that kinky women exist, but much like blonde women, they blend into a homogenous morass of not-quite-humanity.  Vader ThorpYelm's past submissives don't have any names or distinguishing features, they're just "the fifteen," and Ana and Kent ForksFife always talk about them like there's something cheap and dirty about the fact that they might've actually enjoyed playing with him.

(Then again, three months ago this guy was probably telling some poor woman "you're special, you're not like the fourteen...")


My inner goddess is spinning like a world-class ballerina, pirouette after pirouette.

He unclasps my bra and then taking both straps, he slowly pulls them down my arms, brushing my skin with his fingers and the tip of his thumbnails as he slides my bra off. His touch sends shivers down my spine, waking every nerve ending in my body. He’s standing behind me, so close that I feel the heat radiating from him, warming me, warming me all over. He pulls my hair so it’s all hanging down my back, grasps a handful at my nape, and angles my head to one side. [...] Pulling my hair behind me, to my surprise, he starts braiding it in one large braid, his fingers fast and deft. He ties it with an unseen hair tie when he’s finished and gives it a quick tug so I’m forced back against him.


“I’m going to chain you now, Anastasia. Give me your right hand.” I give him my hand. He turns it palm up, and before I know it, he swats the center with a riding crop I hadn’t noticed is in his right hand. It happens so quickly that the surprise hardly registers.

Ow!  God damn it!  Don't do that!  Seriously, even if the person you're playing with is into being cropped, don't spring it on them like it's a freaking prank.  That does not encourage them to give you their hand in the future.


He takes my elbow and moves me to beneath the grid. He reaches up and takes down some shackles with black leather cuffs.“This grid is designed so the shackles move across the grid.” I glance up. Holy shit – it’s like a subway map.

You mean like one of these things?
...Actually, that's kind of a cool idea.  I hate to give E.L. James credit for anything, but I might someday use that idea.

See, for me, I know a date is going well when I don't spend a lot of time thinking about will alert the police if I go missing.

(Safe calls are a good idea, actually.  But this is less "I have people watching out for me, that's nice" and more "at least they have a place to start the missing person investigation.")


Uncoiling from the floor, rising lazily, like a jungle cat, he points the end of the riding crop at my navel, leisurely circling it – tantalizing me. At the touch of the leather, I quiver and gasp. He walks round me again, trailing the crop around the middle of my body. On his second circuit, he suddenly flicks the crop, and it hits me underneath my behind… against my sex.

Oh good, it wasn't officially a bad romance novel until someone called a vulva a "sex."


With one thrust, he’s inside me, and I cry out again, listening to his muffled moan at my ear. My arms are resting on his shoulders as he thrusts into me. Jeez, it’s deep this way. He thrusts again and again, his face at my neck, his harsh breathing at my throat. I feel the build up again. Jeez no… not again… I don’t think my body will with-stand another earth-shattering moment.

She always seems so unhappy about her orgasms.  "This guy hits me, which I hate, but I put up with it because he has sex with me... which I also kind of hate."


“Well done, baby,” he murmurs. “Did that hurt?” “No,” I breathe. I can barely keep my eyes open. Why am I so tired? “Did you expect it to?” he whispers as he holds me close, his fingers pushing some escaped tendrils of hair off my face. “Yes.” “You see most of your fear is in your head, Anastasia.”

Yes, but the reason it got in her head is because of the umpty-zillion times you've done things that did hurt her.

Then they have a bunch more sex in this chapter, but I never know what to write about the sex scenes.  They're not hot to me but they're not interestingly bad. It's just a bunch of thrusting and a bunch of Ana screaming in her head about how this is the best ever and also the worst ever.  But mostly the worst.
Posted by Cliff Pervocracy at 10:46 AM