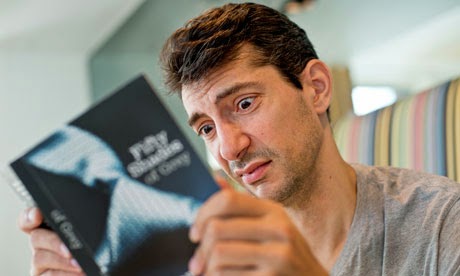 Content warnings for this chapter: Physical and emotional abuse, as always.  Child molestation, and Ana being a shit about it.  Eating disorders, somehow.  Horror movies, if that's a thing I need to warn for?


I roll my shoulders. They’re stiff. His demands for a personal trainer don’t seem so outlandish now, in fact, they’re mandatory if I am to have any hope of keeping up with him.

No.  Nothing is mandatory.  If you enjoy athletic sex then by all means train for it, but if you don't or can't--this guy's sexual demands are not immutable facts of the universe.  He doesn't have to make Ana do athletic stunts; he chooses to.

Sprocket WireCrimp seems to do this a lot, this total abdication of responsibility for his sexual desires.  He just declares "I'm a hitter so if you're around me you will be hit," like he isn't constantly making the choice to hit his partner.  And like "it's not really my choice" is an excuse that should earn him a special exemption from making compromises, instead of a goddamn terrifying problem that should earn him permanent single status until he figures out how to make it his choice.


I steal into the bathroom, bewildered by my lack of underwear. While drying myself after my enjoyable but far too brief shower, I realize he’s done this on purpose. He wants me to be embarrassed and ask for my panties back, and he’ll either say yes or no. My inner goddess grins at me. Hell… two can play that particular game. Resolving there and then not to ask him for them and not give him that satisfaction, I shall go meet his parents sans culottes.

Okay, I've done this.  It's not my proudest moment, but I've hidden Rowdy's briefs while he was in the shower.  His response was "oh grow up" and of course I gave his underwear back.  It was a goofy joke, not an actual humiliation power play.

So there's something really disturbing about seeing my goofy joke translated into this nightmare relationship where she's afraid to even ask him for her underwear back, and would probably be literally beaten for it if she said "oh grow up."

That's one of the invisibly horrible things about abusive relationships.  Not the beatings that happen, but the beatings that don't happen but would if the abused partner ever asked to be treated like a human.  It's easy to see that Solder TinSnip doesn't hit Ana in these scene.  It's terrifying to realize that's because he doesn't need to.


Christian is standing by the panoramic window, wearing the grey flannel pants that I love, the ones that hang in that unbelievably sexy way off his hips, and

Through downtown Seattle?  Not unless it's 3 AM.


“Where did you learn to dance?” I ask tentatively. He turns to gaze at me, his eyes unreadable beneath the intermittent light of the passing street lamps. “Do you really want to know?” he replies softly. My heart sinks, and now I don’t because I can guess. “Yes,” I murmur, reluctantly. “Mrs. Robinson was fond of dancing.” Oh, my worst suspicions confirmed. She has taught him well, and the thought depresses me – there’s nothing I can teach him. I have no special skills.

Yes, that's what's bad about your boyfriend being molested as a teenager.  That now you don't get to teach him how to dance.  Ana goes into a long reverie about how much she hates "Mrs. Robinson," and it's 100% jealousy that she got to do so much fun stuff with her molesting victim, 0% concern about the whole molesting issue.


“Ditto, baby,” he says softly as Taylor speeds into the night toward Bellevue.

Hey!  I lived in Bellevue for ten years!  I don't really have a thing to say about this, I just thought you should know.


Dr. Grace Trevelyan-Grey is on the doorstep waiting for us. She looks elegantly sophisticated in a pale blue silk dress; behind her stands Mr. Grey, I presume, tall, blond, and as handsome in his own way as Christian. “Anastasia, you’ve met my mother, Grace. This is my dad, Carrick.” [...]  “Is she here?” I hear a screech from within the house. I glance nervously at Christian. “That would be Mia, my little sister,” he says almost irritably, but not quite.

Mia.  Ana and Mia.  This is crossing the "coincidence" line and diving deep into "what the HELL" territory.  Is E.L. James trying to send a secret message?  Is she secretly involved with pro-ana?  Is she trying to imply this book is actually a metaphor for eating disorders?

Or--and this is so terrible I suspect it's the real answer--does she just think it's a cute in-joke?  Like, we all know she had to replace the names in a hurry so that they wouldn't be named "Bella and Alice."  I have a sinking horror that she was picking out replacement names for all the characters and thought naming a pair of them after an Internet trend she heard about would be cute.


I flush scarlet, and seeing Kate sitting with Elliot, it occurs to me suddenly that the only reason Christian invited me is because Kate is here. Elliot probably freely and happily asked Kate to meet his parents. Christian was trapped – knowing that I would have found out via Kate. I frown at the thought. He’s been forced into the invitation. The realization is bleak and depressing. My subconscious nods sagely, a you’ve-finally-worked-it-out-stupid look on her face.

Holy shit, I'm going to agree with Ana for once - that is depressing as fuck.


“We were just talking about vacations, Ana,” Mr. Grey says kindly. “Elliot has decided to follow Kate and her family to Barbados for a week.” I glance at Kate, and she grins, her eyes bright and wide. She’s delighted. Katherine Kavanagh, show some dignity!

Yeah, Kate, how dare you be happy about something you're doing with your partner!  Everyone knows all the cool kids are into misery these days.


“Are you taking a break now you’ve finished your degree?” Mr. Grey asks. “I’m thinking about going to Georgia for a few days,” I reply. Christian gapes at me, blinking a couple of times, his expression unreadable. Oh shit. I haven’t mentioned this to him. “Georgia?” he murmurs. “My mother lives there, and I haven’t seen her for a while.” “When were you thinking of going?” His voice is low. “Tomorrow, late evening.”

Okay, so not "thinking about" so much as "already booked a while ago," unless Ana thinks plane tickets are like bus tickets and she'll just pick one up at the station.  Not that I blame her for not telling Brass JumpRing.  Anyway, just wanted to catch you up on this because of course it's going to be the cause of his next freakout.

Good lord this guy is high-maintenance.  Can't fuckin' paint your nails without him crying and pounding the floor because you didn't ask him first and let him pick the color.  Even if he weren't so overtly abusive about it, dating this guy just sounds exhausting.


“For how long?” Christian asks, his voice deceptively soft. Holy crap… he’s angry. “I don’t know yet. It will depend how my interviews go tomorrow.” His jaw clenches, and Kate gets that interfering look on her face. She smiles over-sweetly. “Ana deserves a break,” she says pointedly at Christian. Why is she so antagonistic towards him? What is her problem?

Ana and Clamp HackSaw go on to have an excruciatingly miserable dinner with his family, which I don't feel like typing up in detail, but basically the entire thing is Caliper NeedleNose whispering furiously at her about how he hates every decision she's ever made.  (Kate mentions Ana seeing a male friend, which of course makes things a million times worse because nobody is even trying to make this not look like textbook abuse.)


Grace reappears carrying two plates, followed by a pretty young woman with blonde pigtails, dressed smartly in pale blue, carrying a tray of plates. Her eyes immediately find Christian in the room. She blushes and gazes at him from under her long mascara’d lashes. [...] So the Greys have staff, and the staff are eyeing up my would-be Dominant. Can this evening get any worse? I scowl at my hands in my lap.

Hey, waiter lady, being terrified of this guy and hating absolutely everything about our relationship is my gig!  You better not be trying to get in on this sweet deal!


“Shall I give you a tour of the grounds?” he asks me quite openly. I know I’m meant to say yes, but I don’t trust him. Before I can answer however, he’s on his feet and holding his hand out to me. [...]  “I’m going to show Anastasia the backyard,” Christian says innocently to his mother.

Oh god. This is like watching a horror movie.  No, Ana, no.  Don't go into that basement!


He bends down and scoops me over his shoulder. I squeal loudly with shocked surprise, and he gives me a ringing slap on my behind. “Keep your voice down,” he growls.

No, Ana, scream.  Scream.  Scream for his parents, scream for Kate, make a scene and get the whole fam-damn-ily out here.  He's the one with something to lose if you do that, not you.

I know that isn't really true, isn't really how it works.  I know he could make some "oh, this crazy girl" excuse that fooled everyone and then he'd retaliate against her later.  But I still wish she would scream.


“I need to be alone with you.” “What for?” “Because I’m going to spank and then fuck you.” “Why?” I whimper softly. “You know why,” he hisses. “I thought you were an in-the-moment guy?” I plead breathlessly. “Anastasia, I’m in the moment, trust me.” Holy fuck.

At least in horror movies there's usually a Final Girl.  There's one woman who escapes, who may be injured and terrified but she never gives up, who crawls out of the house of horrors and wipes the blood from her face to wave down a passing car, who lives to see the sun finally rising over the hills.

This book gives me no such hope.
Posted by Cliff Pervocracy at 12:39 PM