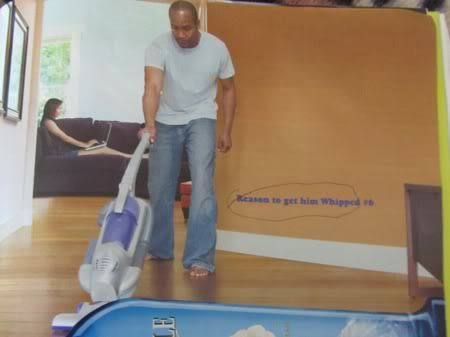 (He's so whipped, he vacuums hardwood!)

[On sexual fantasies]Having sex with another woman.
Why it's so hot: It doesn't mean you're gay or you want to do it for real, but seductive images of women are so embedded in our society, it's only natural to think about--and get turned on by--what it'd feel like to be with the same sex.
Wow. I never expect Cosmo to dissect the concept of the Male Gaze more or less lucidly.

...And then to completely miss the point and use it to prove why the reader couldn't possibly be bisexual. I mean, sexuality is complicated. You can be straight and fantasize about people of your gender. But you can also be not straight and have those fantasies. That does happen sometimes. Not all female-female attraction requires a hasty, almost desperate attempt to explain why this doesn't mean you're attracted to females or anything.

It's not a shocker that this scenario has flitted across his mind too... but with him as a participant.
Oh my. They're acknowledging this? Gosh, this author's going places Cosmo doesn't usually...
The thing that really revs him up about threesomes...
Oh. Never fucking mind.

Cosmo isn't openly homophobic; at least in the last few years, they've never printed anything negative about queer people. Instead, they just pretend that queer people don't exist. Or more specifically, they exist, but they couldn't possibly be you or anyone you know. It's inconceivable--incontheivable!--that those queer people we talk so big about accepting could be our own partners or ourselves.

"I'm fine with people out there doing whatever they want, but me and my folks are normal" is a very subtle form of bigotry, but it's bigotry. And it's not harmless bigotry, either.

If we extrapolate this to, say, Tyler Clementi as he was driving towards the George Washington Bridge to end his own life in the wake of being cruelly and voyeuristically outed over the Internet, I’d bet my bottom dollar that he felt even the songs on the radio weren’t meant for him, but for “normal people” more relatable to the singer and deserving of the song’s message.
-Jesse Bering, Being Suicidal: What it feels like to want to kill yourself, Scientific American

The problem with this game is that if it's a game, then it's acceptable for him to be bratty and grab you without "permission," and you may even be baiting him to do that. If it's not a game, then that same "brattiness" is at best annoying, at worst terrifying. So I don't want to play this game in any relationship where we don't have very clear communication about when we're playing and when we're not, and no Cosmo relationship would seem to have that.

Give yourself goose bumps by sweeping a new, clean toothbrush over the curves of your neck and collarbone.
Phew. After all the Serious Business above, it's a nice breather to see Cosmo being just plain old goofy.

The brand-new hot spot to show off: your spine.
Brand-new! Notochords are so last season.
Posted by Cliff Pervocracy at 5:01 PM