On not taking the bait. 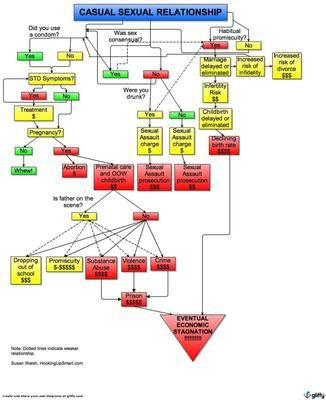 My reactions, in no particular order:
-"EVENTUAL ECONOMIC STAGNATION!!!!!!!!!!"
-"That's not even a real flowchart."
-"That's not even like a flowchart."
-"Rape is just another kind of casual sex?!?!?" (I could write a whole post about this. But Manboobz already did.)
-"Wait, so a declining birthrate is bad for the economy, but having babies is bad for the economy?"
-"Gosh, prosecuting rape sure is hard on the economy."
-"Having kids with a father present leads to substance abuse, violence, crime, and prison?"
-"Wait, you can't list 'promiscuity' as a drawback of promiscuity. That's a feature."
-"So having consensual sex with a condom and not getting an STD or getting pregnant leads you to 'whew'? Since that's actually not rare at all, that's kind of an endorsement, isn't it?"
-"Y'know, not everyone who has casual sex is on welfare. If I have a job, and I pay those $$$$$ out of my own pocket, am I still ruining the economy?"
-"EVENTUAL ECONOMIC STAGNATION!!!!!!!!!!"

Is sex good or bad for the economy? I don't give a shit. It's a personal freedom.

Reading someone rip into sluttiness and promote prudishness (to put it crudely on both sides, but you get my gist), it's easy to be tempted to take that bait, to make yourself a mirror image of their assholery, to say "sluts rule, prudes drool!"

But that's what the assholes expect (and maybe what they want). And most of the time it kinda makes you an asshole too. The right answer is "sluts rule, prudes rule, and anyone who has a problem with either of them... drools."

This comes up a lot when facing misogyny. When reading someone saying "women commit all the abuse, women have all the advantages, women are trained to be unreasonable to men," there's a certain temptation, in the heat of the argument, to point out that men commit all the abuse, etc. And whether you're statistically/sociologically right or not, ultimately, it doesn't prove that much. What I really want to say is:

Abuse, unfair advantages, and unreasonableness suck. Let's get rid of them.

Because this feminism stuff isn't supposed to be about "sides." It's about envisioning a better world. And the people on the other side just never seem to understand that!
Posted by Cliff Pervocracy at 9:22 PM

Email ThisBlogThis!Share to TwitterShare to FacebookShare to Pinterest
Tags: feminism, someone is wrong on the internet