The puzzle of persuasion. 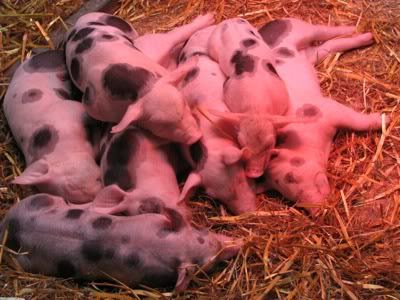 What makes someone change their mind?

It's a fundamental problem in almost any kind of activism, and a major one in feminism. How do you persuade someone that what they're thinking is wrong, and they should think like you instead? Sometimes it feels almost impossible--people will come up with all kinds of justifications and defense mechanisms to defend their beliefs. (I sure do!) And the situation is unquestionably worse on the Internet, where politics often takes the form of a direct battle, and changing your mind would be tantamount to "losing."

But people do change their minds. Check out this graph of the growing acceptance of gay marriage: 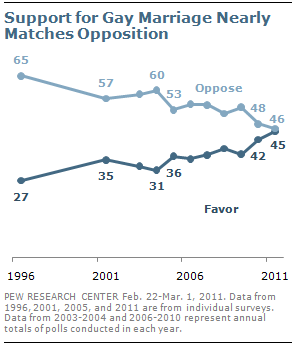 That represents millions of people going from "Adam and Eve, not Adam and Steve!" to "they're here, they're queer, and I'm getting used to it."

I might be the worst person to write about persuasion, because I was a high school and college debater and had a major in Rhetoric. The techniques of formal debate and classical rhetoric are terrible for changing minds. They assume that the most logically sound arguments will win, that emotion is a mere flourish and facts are the most important thing for winning, and--worst of all--that "winning" is the same thing as persuasion. If I wanted to learn how to really get inside people's heads, I should have studied advertising.

I also, frankly, don't really try to change minds with this blog. Sometimes I find out that I did, and that's a wonderful thing; but I'm under no illusions that this is an outreach project. I'm mostly trying to educate and entertain people who already agree with most of my basic beliefs.

But feminism, if not this blog, has to go beyond preaching to the choir. If we want to sell the most fundamental beliefs of feminism--"men and women have equal potential and deserve equal treatment," "women deserve control of their bodies and lives," "differences in gender expression and sexuality should be respected"--we have to learn how to persuade people who aren't our buddies. Here's what little I know about that.

What Doesn't Work
•Calling people assholes. It's useful (and cathartic) when rallying the anti-assholes, but you're never going to convert someone with the pitch "agree with me and be my friend, asshole." (This is a problem that's particularly bad with religious--or atheist/skeptic--arguments, where it's traditional to call nonbelievers deluded morally-bankrupt sheep, then ask them if they'd like to join your club.)

•Direct debate. Especially the kind with point-by-point deconstruction of opposing arguments. Again, fun for the choir, but too intellectual and too combative. This is the fundamental flaw of formal debate--no one ever changed their mind because their points were systematically refuted. Worse, debate has the tendency to create "sides," and once someone's established loyalty to a side it takes a lot to get them to cross over.

•Facts as a primary argument. Facts can back up an emotional argument, but I don't think people come to favor gay marriage because they learn that children of gay parents have similar outcomes to those of straight parents, but because they feel better about gay marriage. (Also, in most of the major gender and sexuality debates, each side has its own statistics, so everyone's choosing their facts anyway.)

What Works
•Education. Here's who we are, here's what we believe, and briefly, here's why. We're not trying to persuade you; we just want to teach you. Never mind what our opponents say, or what we aren't--this is our honestly presented story on what we are. We're matter-of-fact, upbeat, and not defensive; we speak as if it's taken for granted that our cause is legitimate and straightforward, and hope you'll share that assumption.

•Polish. Take a look at the website for Fathers & Families. Now at the website for Fathers 4 Justice. They're both fathers' rights organizations, but F&F has a professional-looking website and speaks in what I can only characterize as "grown-up language." F4J has a website straight outta 1994, nominates an "Asshole of the Month" (and it's the President), and uses all caps and exclamation points like they're going out of style. Which they are. Both groups are advocating similar positions, but the one that looks like a "legit" organization is the one that made me go "hm, these guys sound pretty reasonable actually."

•Social pressure. I suspect that one of the biggest factors helping the increased acceptance of gay marriage is... the increased acceptance of gay marriage. When everyone else at your work or in your family believes a thing, it's easier to go along than not, and easy to think it's the "normal" belief. Obviously this one is pretty hard to get started, but you can create the impression of social pressure even when you're in the minority by presenting your view as socially normal and accepted by lots of nice-looking folks-next-door types, and by painting your most vocal opponents not as major threats but as fringe lunatics.

This, by the way, is where "asshole" rhetoric can be useful. Not in calling people assholes directly, but in picking out a particularly egregious and not very popular opponent, and telling them "you're too smart to listen to that asshole."

•Friendship. Man, when did my sex blog turn into Mr. Roger's Neighborhood? Next post is on buttfucking. But it's true; this is the most powerful form of social pressure. I can argue with strangers on the Internet all day long, I can ignore education, I can snark on ads. But when my friends tell me that they sincerely disagree with something I believe, that's when I give it real consideration. If I care about someone, and care what they think of me, then I'm going to take their opinions really, really seriously.

An organization, even a social movement can be a "friend" in some ways--it can have a particularly charming person who serves as a human face, and it can build a welcoming community of friends among its followers. If you can convince someone that you (or your group) are just nice people who are nice to be around, then convincing them of your actual positions is often secondary. Whatever arguments you make, the real argument is "You'll fit in and be liked if you agree with us."

Does any of this sound evil or manipulative? It's only evil if you use it to advance evil positions. And as for manipulation--you know, none of us came to our beliefs by cold logical analysis of all possible options. All argument is psychology, so I don't think it's unethical to happen to do psychology right.

Being professional and friendly and shrugging off insults isn't cathartic. It doesn't make for a ripping blog post or good entertainment for the converted. (And that's why I don't do it very much.) But if your goal is to truly change minds, I think that's where you have to start.
Posted by Cliff Pervocracy at 5:34 AM