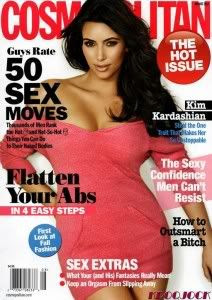 White cover! Kim Kardashian! Sort of a... sweatshirt dress? Is that a thing? Yet another "bet you can't do that with your neck" Photoshop pose! It's August, so it's "The HOT Issue!" This means nothing! "50 Sex Moves!" I never really feel like my sex acts consist of "moves," I just have the sex until I am done having the sex! "How To Outsmart A Bitch!" I know I am sheltered but in my social circle "bitch" is actually a pretty nasty slur! "Flatten Your Abs!" My abs already are flat; it's just the big pad of fat over them that's rounded!

Q: Does showing my tan lines at work make me seem unprofessional?
A: Yup. Even though the best of us can fall victim to zebra skin by accident, exposing your sun stripes at work would be flaunting your bad judgement (baking does lead to skin cancer, after all). Perhaps worse, as far as your boss is concerned, it suggests you spend lots of your free time being at one with your beach towel--not exactly impressive.
While I'm sure there are bosses who think this way, I'm also sure that those bosses are assholes. Free time is free time, and if you're not stealing cars or selling company secrets, I don't think you're being paid to give a shit about "professional." Going outdoors in the summer isn't a sign you're a slacker or you have bad judgement; it's a sign you're a fucking human being.

That said, I actually agree it's probably a good idea to cover tan lines at work. But I don't have to buy into the "we want our employees to represent us 24 hours even though we only pay them for 8" mentality to do that.

I'm not being hostile; I'm being logical. If you want to fetishize independence in a "ooh, she's feisty" sort of way, be prepared for the objects of your fetish to not be fawningly grateful for your approval.

"I fully believe females are smarter and more evolved."
How we got to be "more evolved," when we only breed with males, is a mystery evomulotuionary scientists have yet to solve. (They're still working on an evolmultionary model that explains how 1950s American gender roles and 2010s American beauty ideals are the correct ones for all times and all places, according to evomolution.)

Coin Slots
This is a feature--which you'll forgive me if I don't scan--showing famous men's buttcracks, as captured by paparazzi when the men happened to bend over in public.

I have never been so grateful to not be famous.

36 percent of men say they're more attracted to a woman if she's using an iPad.
This would have come off a little smoother (if even more random and unlikely) if there weren't an ad for a Cosmo iPad app on the very next page.

How To Tell He's Married... Even If He's Not Wearing a Ring
-He can direct you to the nearest Bed Bath & Beyond.
-He's walking a dog. An itty-bitty, fluffy dog.
-He can hold his own in a "Real Housewives of New York City" versus "Real Housewives of New Jersey" debate.
-He pronounces Target "tar-jay."
This is what we call "gender enforcement." Because this isn't a list of things single guys don't do, not really. It's a list of things single guys aren't allowed to do. Cosmo's just one of a whole lot of self-appointed enforcers making sure of that.

...Although not very effectively, because everyone I know says "tar-jay." I didn't even know that was supposed to be a girl/pussywhipped thing.

For really pulse-pounding sex, you know it's good to mix it up and try new things. But as you're, say, pouring hot wax onto your guy's chest, you're probably wondering just how much he's into it.
Er... maybe you should ask him? Preferably before you light the candle.

Now the guessing game is over. We polled thousands of guys to learn exactly which turn them on and which tank.
And if I wanted to have sex with a homunculus created from the average preferences of several thousand guys, this would be really fucking useful!

Of course, it is really fucking useful. Now, when Rowdy tells me he doesn't like having his nipples licked, instead of thinking "I should have psychically intuited that; I suck", I can think "men are supposed to like this; he sucks." Doesn't make our sex life any better, but it sure takes a weight off my shoulders.

Handcuffing him to the bed without saying a word [rated "go for it"]
I've been over this before. I've been over most of the survey items before. Which is understandable; it's tough for Cosmo to come up with 50 ways to have sex while insisting there's only one way to have sex.

Nonetheless, it weirds me out that I--someone who regularly gets punched and bitten and choked during sex--would react to surprise handcuffs with a very nervous "um, you better tell me what you're planning to do here," and some utterly-vanilla guy is supposed to be totally cool and just go along with it.

I know I've said this before and I don't doubt I'll say it again, but: WHY IS COSMO ALLERGIC TO WORDS? Why can nobody ever talk about sex? Why is nobody ever allowed to ask any questions or make any suggestions? Is sex like some kind of goddamn ethereal spirit that goes away if you look directly at it? Is sex like a birthday present, where it's no fun if you ruin the surprise? Is sex like Charades, where if someone talks it's spoiled because it's only fun if you guess?

Sex isn't a game to me. Sex often involves games, but sex itself is Serious Business. It's an activity that has the potential to make my body, emotions, and life much better or much worse. And it's an activity that isn't the same for any two people. The only way to know if I'm doing the "much better" for my partner is to freaking ask.

As for unsexy... "I want to handcuff you to the bed and use your cock for my pleasure. Don't worry, I won't hurt you... I just want you to be bound up and helpless while I suck your cock and ride you and touch your whole body. I want to touch your bound hands and feel your fingers curl when you come. Does that sound good to you?"

He may say "yes" or "no," but any guy who hears that and goes "ugh, never mind, the moment's gone, I'm just going to sleep" wasn't worth fucking in the first place.
Posted by Cliff Pervocracy at 7:30 PM