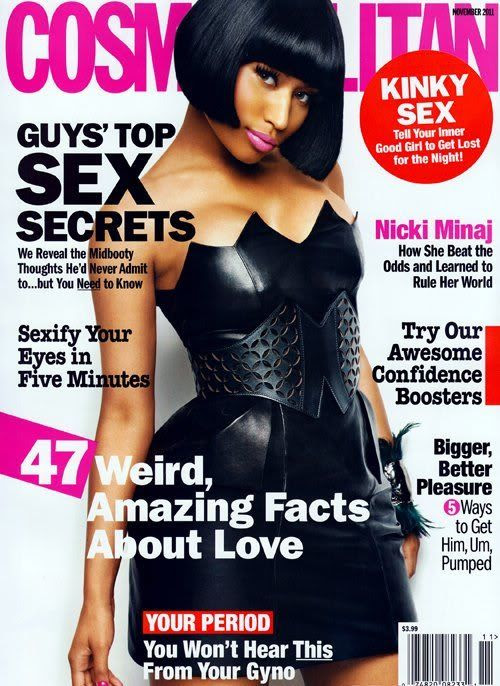 White cover! Nicki Minaj! What the hell is going on with her neck?! Sex secrets, kinky sex... sexify your eyes! I am not sure I want my eyes sexified! I might get conjunctivitis! This image is stolen from the Internet; for some reason the "bigger, better pleasure" headline isn't on my copy! Maybe because "enlarge someone else's penis" is the kind of thing even 3209wjarola@notaspambot.com doesn't promise!


[quiz result] This guy is crazy for you... and crazy intimidated. Men are terrified of rejection, so you have to make it clear that if he makes a move, it'll be well-received.

Apparently it's not just men who are terrified of rejection. I'm not even sure how I'd let him know a move was welcome without that being in itself a move, but knowing Cosmo, it probably involves standing with my shoulders at a slightly different angle. Something quietly receptive. Funny thing is, if you think rejection anxiety is bad, it's got nothing on the anxieties that come up when she's thinking "does he not like me or is he just not getting the signal?" and he's thinking "does she not like me or is she sending a secret signal?"

Never even mind more political stuff about rape culture and women's roles as objects versus actors and whatnot--if you follow Cosmo's advice, your dating life is going to be like trying to get asked to slow dance at the seventh grade social... forever.


According to the Bureau of Labor Statistics, more than 65 percent of financial analysts are men. So head to the neighborhood Starbucks during your lunch hour.

I will buy a venti triple mocha skinny caramel macchiato for anyone who can explain the connection between these two sentences.


We spoke to experts, who gave us the full monty behind five boner-improving secrets. Obviously, we don't want you to become his penis mommy, which is why we came up with ways to implement these on the sly.


Run a pair [of your underwear] under hot water, then wrap it around his shaft and squeeze. The heat helps increase his blood flow down there, making him rock hard and explosion-ready.

This doesn't say "hot and sexy" to me. This says "oh my God, he's filthy... I have to find some way to sponge him off before I'm going to touch that thing."


Two words: Edible underwear. It exists. Wear a pair and let him devour it.


My man went to guys' night at his buddy's house. When I called to say hi, I heard a female voice. I asked about it, and he said it was just guys. Later, he called to say he was coming home because a girl started undressing in the room he crashed in! I feel betrayed--why did he lie?

I don't have the whole story here, but I'm guessing he lied because he was in a relationship where he wasn't allowed to socialize with other women ever, not even in a group, not even if he was going out of his way to avoid any sexual involvement with them, and that wears down a human soul after a while.

Maybe I'm a fatalist, but I think that if someone wants to cheat on me, they'll cheat. If they don't want to cheat on me, they can go to a skinny-dipping-and-soapy-Twister party with thirty-eight beautiful single women and not cheat. But trying to keep them from cheating by having weird rules (other than "don't cheat on me") about who they can associate with--that falls somewhere between creepy and downright abusive in my book.


[Ways to flatter your guy's friends:] "God help the person who tries to go up against you in Duck Hunt."

Hey, I can make a lot of you feel old: Duck Hunt came out before I was born.


One of the other suggestions is "Hanging with you guys is like watching a funnier version of Jackass," which is practically a cutting-edge reference considering that show has only been off the air for nine years. (Also it's kind of insulting, unless they're the sort of guys who are really, really into shooting bottle rockets out of each other's anuses.)

But wait, there's more! But you will have to wait because I'm all out of time now. Next week we'll explore "kinky" things you can do with your underwear! Hint: all of them involve "put your underwear somewhere on his or your body, okay, now you're kinky!"