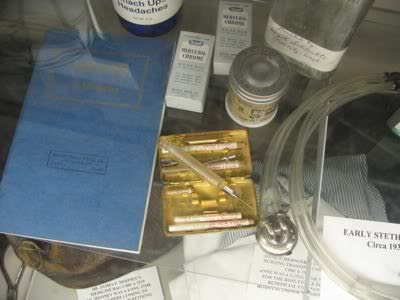 I know I promised a buttsex post, but there's something you should know about me: I am a liar.  Also something more outrageous happened.

I'm in nursing school.  I'm an "adult learner," since I'm 25 and already have a bachelor's (in film and rhetoric, seemed like a good idea at the time), as are about half the people in my class--some are in their 50s and are grandparents.  Which made Tuesday's lab even more inappropriate.

It's a microbiology lab, and usually we do things like isolating and culturing bacteria, doing stains, preparing and viewing microscope slides, and the like.  Not real politically charged.  So I was taken aback when Tuesday's lab was straight out of an abstinence-only horror story.

The lab procedure, in brief: each of thirty students was given a test tube with a few milliliters of nutrient broth.  One of the test tubes contained a sample of harmless bacteria; the other twenty-nine were sterile.  We had to randomly partner up and transfer fluid between our test tubes, then find another partner and do the same, for four rounds.  At the end we swabbed our broth onto agar plates, and next week we'll see which ones grow bacteria.  All this was supposed to represent the spread of an STD.

It made me very uncomfortable, because it's a demonstration that works on two levels.  On one level, it's modeling an epidemic, which is appropriate subject matter for a microbiology class for nurses.  On another level, however, it's all about how people who have sex are dirty.  We're going to have sixteen (or slightly fewer) people turn up with the "infection," and then we're all going to shake our heads and reflect upon how dirty and dangerous sex with four people (so slutty!) is.  It's spherical racehorses--it's intended to be--but it's racehorses made spherical in a way that grossly magnifies the riskiness of sex and "simplifies" away the existence of safer sex and STD testing and treatment.

The frustrating part is that it's almost impossible to argue with this, because the attitude I'm facing isn't opposition; it's impatience and apathy.  I asked if we could do a round with condoms on our test tubes, and the professor laughed and brushed me off not with "we're trying to show how sex has consequences, don't interfere" but with "we're trying to get this done on time, don't slow us down."  When I talked to other students about the lab, most of them expressed the same sentiment--whatever, let's just go through the motions and get this done with--although one of them said to me "It's a good thing I've only slept with one person!"

I don't think this apathy makes the lab okay.  I think it makes it insidious.  "Yeah yeah, sex is dirty, sluts have diseases, just copy the answers off the board and we'll get out of here before ten" is a much nastier and more dangerous thing than if we'd had an overtly ideological discussion of the subject.  It makes it a given thing, a thing not needing discussion, that sex is dirty and nothing can be done about it.

It also makes me seem like a bit of a sex-obsessed weirdo for getting all fluffed up about it.  But this is an attitude with consequences.  "She's probably got STDs" is a synonym for "ewww, slut" that I've heard many, many times.  And equally bad: "He wanted to use a condom with me? I'm not the sort of person who has diseases!"  (Yes, I've heard that.  It was in college, in fact, during my first go-round.)  Linking sex to inevitable STDs--and STDs to dirtiness--is not merely obnoxious, it's dangerous.  It stands in the way of condom use, STD testing, and honest disclosure with partners, and it reinforces the idea of sexually active people as tainted and less valuable.

I'll try to bring these issues up when we get our results in the next class.  I'm also considering talking to the professor about it although I'm not quite sure what to say or what constructive suggestions to make.

Mostly I'm just flabbergasted that the professor had the nerve to walk into a college class with grown adults in attendance and host one of the old "you have to keep your scotch tape sticky for your future husband!" shenanigans.
Posted by Cliff Pervocracy at 7:31 PM