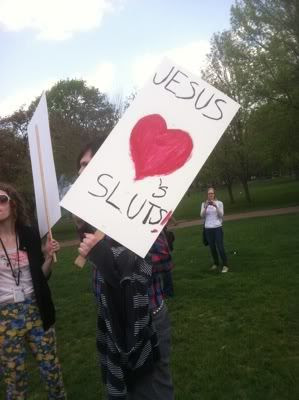 Recently I've been criticized by other feminists for being a "sex-pozzie"--a sex-positive feminist, someone who believes that unraveling our culture's sexual repression is a key part of fighting women's oppression.  On this MetaFilter thread, for instance, there's quite a few accusations that I'm "pointing out that she loves trotting merrily back into the kitchen and that being in the kitchen is what feminism is all about."  Or in this article I was linked yesterday, which is positively dripping with disdain for women who appeal sexually to men, and full of conflation between women whose "sexy" pictures are being used without their consent and women who are intentionally presenting themselves as sexy.

This hearkens back to those "Twisty Faster Is Fucking Insane" posts I did, and I admit, if I had it to do all over again, I wouldn't have called them that. "Fucking insane" is ableist language; Twisty Faster and similar-minded feminists who look down upon "sex-pozzies" are merely obnoxious, elitist, sexist, and counterproductive.

Here are some of my dogs in this fight:

Most critics of sex-positive feminism have not bothered to figure out what sex-positivity is.
It's not the giggling, hair-twirling exclamation of "it's feminist to be sexayyy!"  It's really not.  I'm not going to defend that strawman.  (I also think it's funny how often I get accused of being a Hooters-girl-bot, when I'm about the least Hooters-looking-person ever.)

Sex-positivity is, in a nutshell, the belief in sexual freedom as a key component of women's freedom and of having a better world in general.

If you want to argue with that belief, we can talk.  But if you want to argue with "everyone should be a Hooters girl because showing men your boobies is like totally the most feministical choice!" you're not really arguing with me.  I just think that I'm in no position to judge Hooters girls or assume that they're dimwits, sexists, or helpless victims because of what they do for a living.

If you treat sexy women with disgust and pity, you're not protecting their rights; you're just gleefully participating in their public humiliation.  (You're also often attacking them on a subject that's highly intertwined with culture, class, age, and even body shape. Not everyone who looks "sexy" to you is doing it on purpose, much less doing it to serve the patriarchy.)

And you're falling into the old sexist trap of judging women by their sexuality.  A woman being sexy doesn't make women part of "the sex class"; refusing to see a woman as a powerful individual because she's sexy absolutely does.  It says that her sexiness speaks louder than her actual voice, that who she is sexually tells you everything you need to know about who she is as a person.  It's hard to get more sexist than that.  At least Playboy publishes little interview blurbs with their sex objects.

This criticism goes beyond mere criticism, and into denying sex-positive feminists' agency.
If you tell me that I'm wrong, I can talk to you. I'll probably use bad words and too many italics, but I'll talk to you. We disagree.  But if you tell me that I don't really think what I'm saying, that the words coming out of my mouth aren't mine, how the fuck do I answer that?

Here's a bit from the XOJane article:


So you should go ahead and do things that are patriarchy-approved, if you want to. Buy new nail polish! Care about celebrities! Have a giant wedding! Wear a thong in your hair! Put your picture on the Internet! Look good according to particular patriarchal ideas of what looks good! Be flattered when men wolf whistle at you, literally or metaphorically! Whatever aspects of being a “Hot Chick” work for you, enjoy them. Maybe except the hair thong. But don’t fool yourself that you’re doing so of your own unconstrained free will.

That's right; women who are sexy are victims of mind control. You can tell by looking at them.  There's no way a woman can choose to wear nail polish or care about celebrities.  I know I've been harsh on femininity myself at times (mostly I'm just harsh at the idea of me being feminine), but this goes beyond criticism of femininity.  This is a claim that femininity is a symptom of Borg assimilation.

(Even worse than the Borg claim is the claim that feminine women are deliberately sucking up to men to get cookies from their oppressors.  Ugh.)

It's also, implicitly, a claim that women who reject femininity aren't influenced by patriarchy, which is even more unfortunate.  You don't break free from our entire social system and all the behaviors and preconceptions that come with it just by growing out your armpit hair.  If we are all blinded by the culture we live in and the privileges we have, then it's the height of arrogance to claim that you're so enlightened you've risen above all that.  If women don't have full agency in the patriarchy, where the fuck do you get off claiming that you do?

Sex still matters.
So these are all reasons that people who think it's okay to call me a stupid cock-sucking bimbo under the guise of "feminism" are poopyheads.  But what's my reason for remaining a cock-sucking bimbo?  Why do I think sexual freedom is important to feminism?

Well, for the long answer, see this entire blog.  But for the short answer: because it's impossible for women to be accepted as human beings if we aren't accepted as sexual beings.  If women's dignity is contingent on our not being too sexy, we're never going to have dignity.  We have to accustom ourselves to the idea that someone can be highly sexual, publicly sexual, sexual in a way that we would totally never do ourselves because whoa... and still have dignity.

Finally, part of making life better is about making sex better.  I don't just talk about sex to say "HEY EVERYBODY I'M INTO SEX"; I talk about it in terms of promoting enthusiastic consent, promoting body acceptance, promoting the idea of finding out and coming to terms with your own sexual desires.  I think having the sex life that's right for you is an important part of being a self-actualized person.  And I'm not going to avoid these discussions just because someone might think they're titillating.

And beyond finally, I do like sex.  I do think about sex a lot.  That's not a political position; it's hormones or something.  It's who I am and I'm not going to hide it.

...Wow, that got long and preachy.  Next post is about buttsex.
Posted by Cliff Pervocracy at 1:45 PM

Email ThisBlogThis!Share to TwitterShare to FacebookShare to Pinterest
Tags: feminism, my intolerance revealed