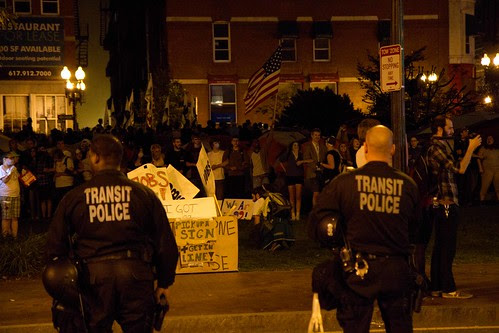 Last night, Occupy Boston got ugly. The police ordered media away and violently attacked a peaceful protest in the middle of the night.  Veterans for Peace were beaten, medics were arrested, and protestor's personal property and medical supplies were thrown in garbage trucks. 100 people are in jail right now and I'm sure some of my friends are among them.

I was out there last night but left before the arrests began, because I was told I might not get a nursing license if I had a "disorderly conduct" on my record.  It was infuriating to walk out when I had friends staying behind and standing their ground, but one of the ugly dynamics of this movement is that too many of the people who need it can't afford to protest.

The protestors were peaceful and unarmed and were attempting open communication with the police and city. Their only crime was occupying a public park.

It scares and saddens the hell out of me, both for my friends who were there and for the idea of protest in this country. Free speech and assembly doesn't mean much if they're subject to the whims of the police deciding "no, we meant approved speech and assembly through the proper channels."

I'm also infuriated by the persistence of the "dirty hippies and creepy anarchists" image of Occupy Boston.  A lot of media outlets have been selectively interviewing and photographing the weirdest-looking and least coherent people there--ignoring the presence of nurses, ironworkers, veterans, teachers, and other such fringe subversive elements.  (This is a tricky issue because I don't want to devalue the voices of hippies and anarchists and funny-lookin' people, but at the same time, I know the public does, and selectively showing those people in the media is definitely encouraging a bias against the movement.)  Most of us either have jobs or want jobs; most of us are intelligent people who know exactly what we're doing out there; none of us were violent.  And if it makes you feel better, plenty of us were nicely dressed with clean hair and everything.

The only good news is that Occupy Boston just got a whole shit-ton of free publicity, public sympathy, and new supporters, courtesy of the Boston Police Department.

I intend to head back out there and make the most of that.
Posted by Cliff Pervocracy at 8:37 AM