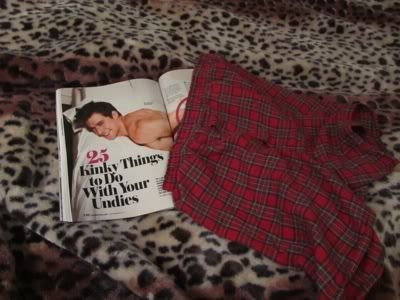 Let's finish this! Mostly because I've been sitting on it in "ugh, do I have to?" misery and it's been stopping me from writing a real post! Sadly nothing in the second half can possibly top "penis mommy!"

People expressed curiosity last week about what the "kinky sex" would consist of, and now the big reveal: underpants.  Kinky now means underpants.  I don't even question these things anymore. (Phase 1: Collect underpants. Phase 2: ????? Phase 3: Kinky!)  And then it's all the fun you'd expect from an article themed "underpants" in a magazine too conservative for anything genuinely edgy but too salacious to be bound by good taste.


Use your underwear as a scrunchie.


Have him place his ankles in the holes of your underwear, almost like you're tying his feet together. He'll feel dominated--aka massively turned on.

The dynamics of this work a little differently if I'm not a wispy little thing with wispy little underpants.  (Several other tips, like planting your "tiny thong" for him to find, also assume dainty proportions.) Otherwise he's just going to be standing there looking goofy with his feet in my underpants.

...Actually, no, I'm pretty sure this looks goofy no matter what your underpants size.


Q: My boyfriend wants to have sex all the time. Even if I tell him no, I end up waking up to him humping my leg. How do I let him know what a turn-off that is?

A: I'm no scientist, but I think there are two reasons why he constantly wants to have sex with you: One, he is a dude. Two, he thinks you're hot.

Does she mean literally? Because that's not normal.  It's not normal and not okay to hump someone in their sleep.  (Unless you work it out in advance, but obviously that's not an option in Cosmoland.) And it doesn't strike me as an innocent expression of dudely appreciation.  It strikes me as a passive-aggressive way to punish for her not putting out, to prove that she can't stop him from using her body anyway.  If I were her, I'd be very clear about saying "Please stop trying to do sexual things with me after I've said no. If you don't commit to stopping this, I don't feel safe sleeping in the same bed as you."

Cosmo's suggestion is "I love having sex with you, but when I'm sleepy, I don't feel sexy." Because God forbid you actually not want it sometimes; you have to give a better excuse than that! And then they go on to recommend that she have more "spontaneous" sex with him, because clearly his real issue here is that he's just a spur-of-the-moment sort of guy!

I don't have much more to say than "ugh." I'm not a sexless shrew-harpy, I swear, but I don't think the answer to every problem is "gently coddle his ego while sexually servicing him." Men are grownups and they won't crumble into tears or leave you forever if you talk to them in grownup language.


Announce your big O on Twitter:
Go all the way on November 4, then announce your orgasm by tweeting #CosmoDontFakeItDay

Right, because there's nothing that'll help out a woman who has trouble orgasming like being expected to perform on a specific date and announce it publicly!  Someone who takes this stuff to heart is going to end up faking her "Don't Fake It Day" tweet, and that's every kind of wrong.


Earlobes: These spots are packed with nerves that connect directly to the brain, so stroking them feels particularly amazing.

This is how Cosmockings seem to work, lately. I read some stuff that genuinely angries me up, and some stuff that just makes me giggle and point.  I'm pretty sure every part of your head "connects directly to the brain," but hey, earlobes, super sexy.


Signs You May Be Dealing With A Psychopath
Serial killers often blend into society, but there are clues to look for that hint something is wrong below the surface.
-He stands stiffly
-He speaks only about himself
-His words seem rehearsed
-He is detached
-He exaggerates tiny gestures

Oh no!  He's a serial killer!  Or he's socially awkward!  Maybe he even has one of those mental illnesses that don't make you murder people but just make you talk awkwardly!  About half of these describe me, the other half describe plenty of my friends, and none of us have serial-killed hardly anybody.  Considering how many serial killers have been described as normal or even charming, this bit of "people who act different really are as horrible as you always suspected" isn't even helpful.


Describe your dream sex life.
A. Hot quickies with your man whenever and wherever you want them
B. A mix of sensual encounters as well as wilder ones, like in the bathroom at a party
C. Tons of foreplay plus a new position or prop every time

B is correct.  The other ones are incorrect and indicate some sort of problem.  It doesn't matter what you like, because Cosmo has figured out what you should like.

I guess that's Cosmo in a nutshell for ya.
Posted by Cliff Pervocracy at 7:49 PM