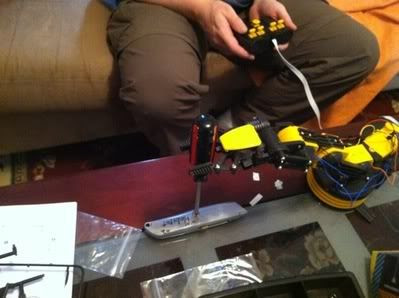 I had a very nice weekend. There were robots (pictured above), dinosaurs, ice cream, and sex.  The only thing it was missing on the list of "things that make Holly go eeeeee" was spaceships.  The real world is such a strange contrast from Cosmo.  There's so much more in it.

But I didn't finish last time, and so, because of my sick little self-imposed challenge, I have to dive back into Cosmoland, into the bare white box of a world where there are only two kinds of person, only one kind of love, and you're usually doing it wrong.

Our new obsession: ipickupsports.com. It's like Craigslist for sports--you search your zip code, and it pulls up a map with all the pickup games (like basketball, football, and even tennis) going on nearby. Translation: it pinpoints exactly where you can find sweaty, shirtless eye candy at, oh, 2:30 in the afternoon this Sunday.
In other news, this fall's hottest fashion accessory is a knee-length stained trenchcoat!

I guess it's not considered creepy if you're a woman?  If you were less feminist than me, you might say that the guys probably like it as long as it's a hot chick leering at them; if you were more feminist than me, you might say that their male privilege means they aren't as sexually vulnerable to her as women would be to a man.  But I'm just feminist enough to say no, that shit is fucking creepy.

"My girlfriend told me that I had 60 minutes to use whenever I wanted and for (almost) whatever I wanted. I definitely used all my 'rollover' minutes on her that weekend!"
...is she doling out sex by the minute?

If it's "all about him" sex, that makes some sense, sort of.  (Although I think your relationship's in trouble if that looks very different from your everyday ordinary sex.)  If it's sex, period, that he's accumulating rollover minutes on, then... well, if it was me I'd be shooting myself in the foot by giving him a limited timeframe, wouldn't I?

At a club, you notice a hottie across the room has been eyeing you shyly all night. To help him along, you:
a) Walk over and say that you saw him looking and now the ball is back in his court.
b) Get your friends to relocate to the opposite side of the room, close to where he is.
c) Write down your name and number and ask a bartender to pass them on.
If you chose "a," you were too "bold."  The correct answer was "c."

The new dude you've been seeing waits until the day of to ask what your Saturday-night plans are. You answer:
I'm not going to bother typing out the answers.  I'm just going to point out that none of them are "by telling him what your plans are."  Regardless if you're Cosmo-bold or Cosmo-shy, artifice and manipulation are the only options.

After happily dating your man for two months, you're itching to be exclusive. You nudge him to kick it up by:
a) Making a flirty comment on a guy friend's wall--jealousy will spur him to talk LTR.
b) Changing your relationship status on Facebook--when he sees it, he'll just go with it.
c) Swapping your profile picture to a cute shot of you two together--it'll plant the seed.
The "correct" answer is "c."  (Am I the only one who's annoyed when people do that? I mean, even if they're married.  Your profile pic should either be just you, or something devastatingly clever. Otherwise it's less "I am in a relationship" and more "Personality Merger In Progress.")

What is it with the not-talking?  How can you have an entire relationship that way?  What does a relationship even mean in this universe--the person you silently stand next to most often?  Why does it matter if you do that exclusively?  If you can't even ask your boyfriend if he is your boyfriend, what chance in hell do you have of asking actually difficult things?

Here's two from the sex advice columns that I didn't go over in detail because I've done it a million times:
I want to handcuff my husband in bed, but I feel weird initiating it. What's the best way?
When my guy wants oral, he does this thing where he pushes my head down--not a turn-on! What can I say to explain how unsexy it is without ruining the moment?
The answer, in both cases, is anything besides "freaking tell him."

You want to conduct your entire relationship on Facebook? Great. Try a private message--"so am i like ur gf now? lol."
Posted by Cliff Pervocracy at 10:58 AM