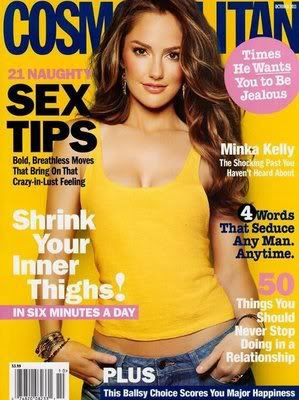 Yellow cover! I'm not sure why I still describe the cover now that you can see it! Force of habit I guess!  Minka Kelly! She looks like she's got B-cups under the tank top and DDs worth of cleavage! I know they do amazing things with push-up bras these days but I'm pretty sure that's just Photoshop!  "Shrink Your Inner Thighs!" Just the inner ones?! "Times He Wants You to Be Jealous!" Apparently this is a headgame where you assume the other person is playing a headgame and that can't possibly end badly! 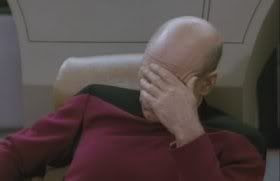 A dude's set of wheels is always a hot place to do it. Of course, we're talking about his other mode of transportation... from when he was a teen: his skateboard.
I have to confess, I actually like this about Cosmo.  In with all the ludicrous "a relationship is two people in madly passionate love who don't trust each other and don't talk to each other" ideas, sometimes they're just wacky.  I enjoy the wacky.

I don't enjoy it so much that I'm going to actually have sex on a skateboard--way too much potential for slapstick comedy and severe spinal trauma--but I appreciate the innocent goofiness of the idea.

50 Things You Should Never Stop Doing in a Relationship
As opposed to this article, which is far, far less charming.

6. Never letting the cracks show in public. Even if he starts doing that thing where he contradicts every damn thing you say, wait until you get home to call him out on it.
If he's contradicting every damn thing I say, the cracks are already showing.  While I agree we shouldn't be hashing all our shit out in public, if he's taking deliberate digs at me, it's not my job to keep up the appearance that this is peachy.  A "crack" that size needs at least a "honey, can I talk to you for a minute?", not a sweet tolerant smile.

And the funny thing is, if he's a decent person, he may actually appreciate that you didn't just let him make an ass of himself in public.

7. Maintaining your feminine mystique by never putting on deodorant, cleaning your ears, or clipping your toenails in front of him.
Apparently the "feminine mystique" consists of carefully maintaining the distinction between "woman" and "person."  (I'm not the first person to pick up on this.)

8. Swiping on some lip gloss even if you two are just running Sunday errands. We're not clutching our pearls and insisting that you do up your whole face, but a little touch-up isn't exactly going to set back the whole feminist movement or anything.
No, but telling me I have to do this, and that it's a big favor to me that you aren't demanding more, is doing just that.

After the Gender Wars Of A Few Weeks Ago, I kind of came to a conclusion with a friend; femininity and masculinity are things to be practiced as consensual kinks.  If being feminine is your desire, your kink is okay!  But if being feminine is something you go along with grudgingly, then it's no longer truly consensual.  And if it's something you do only because you've been told that your natural lips are unacceptably unshiny--well, that's nowhere near what enthusiastic consent should be.

11. Screening his call and waiting 10 minutes before returning it. Then be all mysterious about where you were when asks why you didn't pick up.
There's a fine line between "feminine mystique" and "concealing a dark secret," huh?

"I thought she was just a very mysterious woman who played hard to get and only let me see her at her best, but it turned out she was hiding her zombie mother, a nurse, and a priest in the basement and surreptitiously feeding them animal tranquilizers."

42. Quickly running to the bathroom to brush your teeth before morning sex.
I've skipped over a whole bunch of "never let him see you're a real person" stuff, because I think we all get the picture by now, but this one stood out by actually obstructing sex in favor of sexiness.  The awesome part about morning sex is that you're still all warm and cozy together in the bed and half-awake.  And being disheveled, even stinky, is also part of the charm.  Morning sex is about being comfortable with each other, and it's hard to do that when you have to jump up and demonstrate that you're painfully uncomfortable with yourself.

I know that there's no "masculine mystique" because they're just people, but it seems like this could make a guy awfully self-conscious if he didn't brush his teeth,

[picture of what's-his-face with Snooki, holding a pink purse] Snooki's ex was careful with her Hello Kitty tote--it's where his balls were hiding, after all.
Oh, my bad, there is a masculine mystique.  But it's about not being a woman (made pretty explicit with the "balls" comment), not about not being a human, so I still say it's an easier standard.

4 Words That Seduce Any Man... Anytime
[...]"I want you now."
That's not seduction.  That's just an invitation.  That's like saying you "entranced" your friends because you asked them "hey, wanna come over?"

Don't get me wrong; I'm all in favor of invitations.  They're a hell of a lot easier to use and more effective than subtle innuendos, and they don't leave nearly as many dangerous ambiguities on the table.  "I want you now" is a fine way to tell a young gentleman your intentions for the evening, but there's nothing mystiquey about it.

There's a quote in this article from Warren Farrell.  The quote itself is innocuous (or, you know, not particularly bad), but Warren Farrell is a big-time anti-feminist in the "men's rights" movement. I'm skeeved that he's talking to Cosmo.

He consistently won't tell you who he's texting.
You are: Kinda Jealous
You should be: Freaking The Hell Out
---
A certain level of privacy in a relationship is necessary, but you'd have to be crazy to put up with this secretive behavior[...] [ask him to show you the screen] If he has nothing to hide, he'll fork it over. If not, there's a good chance he's involved with another woman... or the Mob.
So now Cosmo is the TSA.  "You have nothing to fear if you have nothing to hide" is the refrain of everyone--government agency, parent, school official, or romantic partner--who can't think of any other reasons someone might not want you reading their diary and digging through their underwear drawer.

Maybe he's trying to get a friend's advice on a relationship problem.  (Like that his girlfriend has no boundaries, for instance.)  Maybe he's dealing with a family issue that's somewhat private.  Maybe he and a friend are trading crude jokes that might offend you.  Maybe it's just nothing to do with you at all.

A relationship is not a personality merger.  I'm glad for the things Rowdy chooses to share with me (and I'd leave him if he never shared anything), but I know it's always his choice.  The access I have to his life is a privilege, not a right.  I trust that he isn't hiding anything from me that would seriously affect me, but all I can do is trust--I cannot enforce. That's not a relationship any more.  It's a Panopticon.