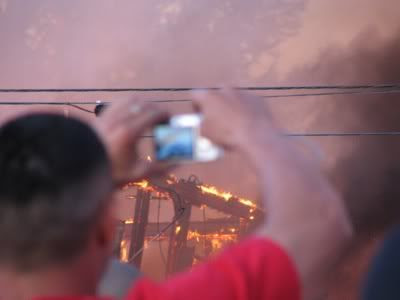 There's a lot of talk out there about "false rape accusations," which tends to come up in every discussion of a rape that did not involve a virgin in a prairie dress screaming "NOOOO" while being beaten on videotape in front of thirty-eight witnesses who were all members of the clergy and decorated war heroes.  The statistics on how many rape accusations are false range from above 40% to under 2%, and (as is usually the case) which number someone chooses to use in their argument tells you more than the number itself.

In the middle of this mess, of hearing that Julian Assange and Dominique Strauss-Kahn and whoever the fuck it is this week are victims of our Giant National Epidemic Of False Rape Accusations, I want to offer a point of clarification.  When someone says "false rape accusation," it can mean any of the following scenarios.

1. Alice goes to the police and falsely accuses Bob of raping her. Bob is arrested, tried, and convicted.
This one's the boogeyman.  And for good cause; it is horrible.  I'm sure it has happened.  Unfortunately, by its nature we can almost never know when it's happened--which should make you very suspicious of someone who claims it happens constantly.  A handful of people have been cleared by new evidence, but only a handful--nowhere near a significant proportion of the people in prison for rape.  Obviously there are people who are innocent and we don't know it, but you can't get statistics on a thing nobody knows.

Therefore, when people talk about the prevalence of "false rape accusations," it never ends there.  Here's some other things that phrase can mean:

Does Bob's good name get besmirched anyway?  Sometimes it does, and that sucks.  But it's no excuse for not taking rape accusations seriously--you don't know they're false until after they're investigated.

4. Alice does not go to the police, but falsely tells all her friends that Bob raped her.
This is the only one that's happened to anyone I know.  Again, it sucks and it really can fuck up Bob's life.  But since it doesn't involve the legal system in the first place, changes to rape law would do nothing to prevent this.  This is slander, but it's not exactly an "accusation."

7. Chuck rapes Alice. Alice tells the police that Bob raped her.
This is usually an innocent mistake, and often one that has more to do with bad police work than with Alice being dishonest.  And Alice really was raped, so any solution to this problem that comes down to "just ignore her" is inappropriate.

Note that this is the case in almost every situation where someone was cleared by DNA evidence.  If there was DNA to test, then it's very likely that someone raped Alice, and calling her a "false rape accuser" is wrong.

8. Alice and Bob have sex that Bob thinks is consensual. Alice does not. Alice accuses Bob of rape.
I think a surprising proportion of rapists are in such severe denial about what it means to have sex with a deeply drugged person, or a person who said "no" until they were cornered and held by their wrists and then they said "yes," that they honestly believe they're victims of false accusal.  All they did was have sex with someone who didn't want it, and here they are, being falsely accused of rape!  The injustice!

9. Bob rapes Alice. Alice goes to the police and Bob is arrested, but the charges are dropped or he is acquitted.
When you see the wildly huge statistics claiming 40% or more of rape accusations are false, this is almost always what they mean--40% or more of rape accusations are not proven true. However, if you think that means they were proven untrue... um, I don't have a witty simile here but you're wrong.  Guilty people are released all the time and sometimes for terrible reasons.

10. Bob rapes Alice. Alice goes to the police and Bob is arrested, proven guilty, and convicted. But some people still think Bob is innocent.
And this is where all this talk of false rape accusations ends up.  It ends in a place where rape can never be discussed, under any circumstances, even in the most clear-cut cases, without people crying "false rape accusations are everywhere!"  It ends with "innocent until proven guilty"reinterpreted as "the accuser is guilty until proven innocent."  It ends with "a court of law should not convict on this evidence" being confused with "we should not show the victim any sympathy on this evidence."

Ultimately, all too often, it ends with a huge number of rapes going unreported, because sometimes it's easier for a survivor to live with the knowledge that their rapist is free than it is for them to go through years of being under constant suspicion of being an evil false accuser.  It ends with misogyny justifying and reinforcing itself, as the concept "women lie about rape" becomes both proof of and proven by "women are untrustworthy, manipulative, and malicious."  It ends with rapists who tell their victims "no one will ever believe you" being right, with society standing behind them.

Every time we reinforce the common wisdom that "women lie about rape all the time," rape gets a little easier to commit.


Do I have an awesome, pat solution for this whole mess, an idea that would totally fix our judicial system and society to ensure justice for all?  Fuck no!  I'm not Professor Fucking X. Nothing short of psychic powers will ensure that the guilty are always punished and the innocent never are.

I'd rather live in a world where a hundred false accusers are told* "I believe you, I care about you, and I'll stand up for you," than where one rape survivor is told "gosh, this story has two sides and I really need to consider him innocent until proven guilty."


*not in court, but by their friends, families, and people who figure they have a right to comment because they read about it on the Internet and everything
Posted by Cliff Pervocracy at 6:10 PM