"Is this spot taken?" 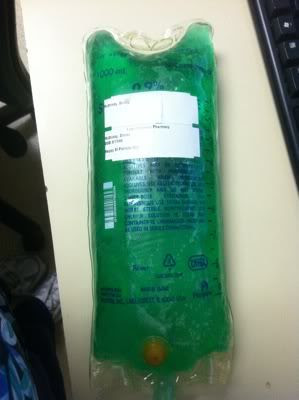 Far too often, patients at the ER try to hit on me. (If you are picturing someone cute and polite who is in the ER for reasons that have nothing to do with being in a drunken bottle fight, then you are picturing the exact opposite of the sort of person who does this.) And most of the time, they do it in the format: "Gosh, ain't you a little sweet thing... do you have a boyfriend?"

Perhaps I'm reading too much into the drunken advances of the sort of guy who tries to hit on the person who's picking glass out of his wounds, but it unnerves me that my boyfriend's right to my body is counted as more important than my own, even when he's not around. They're trying to establish whether I'm owned, not whether I'm interested.

Sometimes, for extra comedy/discouragement value, I'll say "yes, and he's really mean." This is a straight up lie, as Rowdy is barely mean enough to use sternly worded I-statements with a fly. (And the implications here are horrifying; am I suggesting that Rowdy would beat someone up for having consensual sex with me, or that only his "meanness" protects me from sexual assault?)

So the real answer is: "Yes, and he's not mean at all, but Roger The 250-Pound Security Guard sure is. If you try something, guess which one I'm going to call?"
Posted by Cliff Pervocracy at 1:27 AM