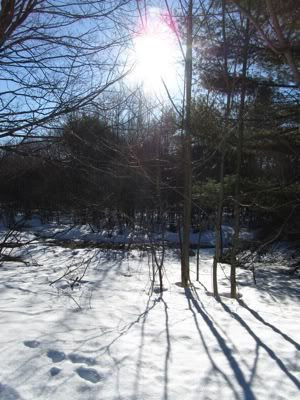 As I may or may not have bothered to mention, I've started classes in nursing school.  Classroom prerequisites this year, two years of nursing classes and clinicals, and if all goes well, I'll be 28 when I become an Actual Real Nurse For Real.

I still need a good grade, of course; and I still have some anxiety about that.  But it's nothing like the anxiety I felt as a teenager.  It's a matter of "I'll learn the stuff and I'll tell them what I learned," not of facing judgement.  I wouldn't say that school is easier now--but it doesn't scare me.

We didn't have sex this good a year ago.  We had good sex, but it wasn't like this.  We didn't know each other's bodies and minds well enough.  It's the difference between driving a good car--and driving your good car, the one where you know exactly how tightly it takes every curve, exactly how it responds to every gram of force on the pedals.

Our sex just keeps getting better.

I was still flying when I fell asleep, his whole body wrapped around mine.

Yesterday, I went and got a cup of coffee between classes.  I asked the coffee lady for a medium drip coffee, she told me "that'll be a dollar thirty," I gave her a dollar thirty, and I took my coffee and went to class.

I know this sounds like a really, really pointless story.  But what struck me is how easy it all was. Specifically, how much easier it was.  Even such a minor transaction used to be fraught with weird anxiety for me--anxiety I would never admit to, because how can you admit something like "I have great difficulty with the social nuances of buying a cup of coffee"?

I didn't know what kind of coffee I was supposed to order, or how I was supposed to phrase the order. Should I call it "java" or "joe" to show I was a cool, experienced coffee drinker, or should I use precisely the name on the menu?  Were there certain drinks that only dorks ordered?  Would it be rude to act chummy with the coffee lady, or rude to not act chummy with her?  If I fumbled my change and she got impatient with me, did that mean she hated me?  Could I ever show my face again at the coffee stand if I made the coffee lady hate me?

These goofy-ass things tormented me when I was about eighteen.  It feels almost magical that they don't any more.  Not by figuring out all the secret social codes, but by figuring out that there aren't any secret codes, I became one of the cool, experienced coffee drinkers.

I can order coffee in total comfort now.  It's a wonderful feeling of power.  Eighteen-year-old me would never have believed it.

I'm taking Human Growth and Development right now.  The professor's in his late fifties or early sixties, and told us that in his experience, each stage of life is better than the last one.

The biggest secret we keep from young people is that being an adult is actually pretty freaking awesome.

Also, I can have pizza whenever I want.  I don't even like pizza that much though. We have secret adult foods that are better than pizza.
Posted by Cliff Pervocracy at 12:59 PM