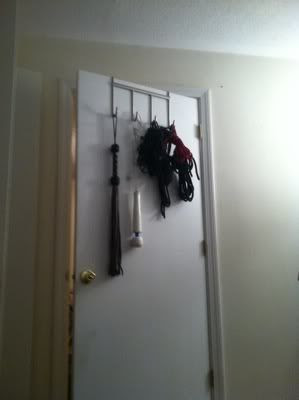 The other night, I was topless and locked in a cage at a party.

Funny thing is, it wasn't very sexy. And I don't mean that in a bad way. It was relaxing, being curled up in an enclosed space. It was playful, hanging on the bars and acting like an animal. It was sociable, being in an area where people could come by and chat, have a seat on my cage and say hey. And, not to deny the kinkiness of it all, it was also a submissive experience having my freedom of movement cut off and being okay with that.

Kink, for me, divides into two very distinct types. There's kink as a rollercoaster, a wild escape from the world and from the bounds of sensation itself, a feeling that has me screaming and groaning and losing my grip on reality and flying through endorphins and pleasure and agony. And then there's kink as a Stupid Human Trick.

I probably shouldn't say "stupid" human trick, because they're not stupid at all. They're lots of fun. But they're more about "interesting ways to play with bodies and minds" than about being swept away by an all-consuming wave of sexual power. Maybe the clearest difference I could draw is that I think you have to be innately kinky to like rollercoaster kink, but anyone with an open mind can understand the appeal of Stupid Human Tricks kink.

It takes a very particular sort of chemistry to get me ready to ride the rollercoaster that is pain. But I'm almost always up for the kind of kink that's more like "hey everybody, check out what I can do!"
Posted by Cliff Pervocracy at 12:03 AM

Email ThisBlogThis!Share to TwitterShare to FacebookShare to Pinterest
Tags: kink