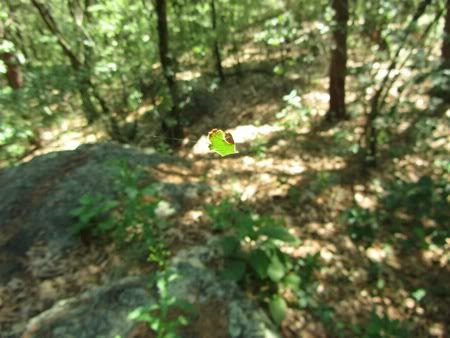 I'm making that sound worse than it was. I didn't object because I had a total crush on him and it felt great and I was happy and excited this was happening. But I didn't say any of that--I was 15 and extremely socially awkward and had absolutely no idea of how to respond to sexuality, so I was completely silent and frozen. Silent, frozen, and happy, as it turned out. But he had no way of knowing that. All he knew was that I didn't stop him.

Would he have stopped if I said "no"? Almost certainly. But... almost certainly. Some other factors to bear in mind: I was at his house, which was not close to any bus route and was about ten miles from my home. We were alone in the house. He was much bigger, stronger, and older than me. He owned weapons. He was more or less my only friend at that time in my life. And he was not someone who could maturely talk through conflict--I never saw him get violent or threaten violence, but he tended to go to direct to TantrumVille without stopping in CommunicationTowne.

I want to stress again that I just liked having my pussy stroked; none of this was running through my head at the time. But I wish it had been running through his. Because if I had been doing the rape math in my head, if I had been going along with it out of fear or obligation, he wouldn't have known. He didn't rape me--but it would have looked exactly the same to him if he had.

That's the problem with "no means no." There's a lot of reasons someone might not say "no," and being into the sex is only one of them.

Is it "really" rape if you don't know the person isn't consenting? Probably not legally, but in terms of the effect on the person who's being used sexually while they're paralyzed with fear, might as well be. Accidentally shooting someone isn't murder but it leaves them just as dead.

Anyway, this question ought to be irrelevant. Whether fucking someone who doesn't want it but doesn't object is rape or not, it's crappy and it's avoidable. It's not like good sex ever comes out of a situation where one partner is silent and immobile.

There's a little more finesse than just asking--you need to ask in a way that makes it clear "no" is an acceptable answer, and be sensitive to the difference between "...okay" and "OH YES"--but even without finesse, just asking makes 90% of the difference.

I know why he didn't ask. He didn't ask because he thought I might say "no." But this doesn't mean that he wanted to rape me. What it means is that he was afraid I was in some sort of strange, precarious mental state in which I would have to say "no" if I was asked, even though I really did want it, but once I had said "no" he couldn't do it.

Unfortunately, this mental state does exist--although far less often than people think, really--and I lay the blame for that squarely on slut-shaming culture and the myth of "spontaneous" romance. I lay it on every romantic drama where one character forces a kiss on another but it's okay because it was the kiss of true love and they understand as soon as they get into the kiss. I lay it on every teen sex comedy where the girl who says "let's fuck, baby" is gross-out comic relief and the girl who says "ooh, I shouldn't" is the real sexy one. I lay it on every girl who thought it was coy to say "no" when she meant "yes" and every guy who told the whole school that his date said "yes" too quickly. I even lay some of the blame on Cosmo and all the times it describes sex as something that spontaneously breaks out when the mood is right, like laughter or a bad case of the contagious yawns.

Until "yes" means "yes, sex would be lovely right now" and not "yes, I am an icky slut with no sense of romance," it's going to be hard to live in a world where only yes means yes.

But it's not all down to society. In my personal world, yes means yes fully and right now--Rowdy and I still ask before we fuck and we still take nos gracefully and unenthusiastic yeses with "we can just cuddle and that would be fine," and enjoy the enthusiastic yeses that much for it. I haven't fixed Western culture yet, but I've fixed my bedroom, and that's a start. If enough people can just say that, maybe the culture can change a little after all.
Posted by Cliff Pervocracy at 6:21 PM