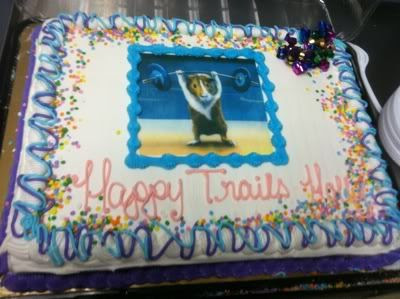 Today is my fourth bloggiversary! That's 1264 posts spanning across 5 homes, 4 relationships, 3 jobs, a move across the country, and a massive refocus from "my vagina: let me tell you about it" to "my vagina: it is a tool for liberation." Also, 43 issues of Cosmo.

I'm looking back at my archives from the very beginning, and it strikes me, to the point of cringing, just how much I've changed. Changing minds is something I wonder about a lot--sometimes I worry it can't be done at all, that people who are now assholes will be forever assholes.

So it's good to see that I used to be an asshole. Not a complete one, but I used to be a very different person, and I learned and changed. There was no one moment where someone said something to me that made me go "holy shit, I've been wrong all along, and I must change everything!" Instead, it was water dripping on a stone; over time, though I often looked very resistant, I was changing bit by little bit until I'm so different I don't feel like the early entries are my own voice any more. (And not just because I used to throw out "lame, retarded, crazy" insults like they were candy. Sorry about that.)

I mean, look at this asshole:
I feel like sexuality has no legitimacy unless you're hot. If you're hot it's sexy, if you're ugly it's just ridiculous.
Sure, she admits that she's voicing her own insecurities, but those insecurities are leaking out into judgement of everybody on some completely unspoken beauty standard, and people who don't meet that... aren't allowed to be sexual? Christ, past-Holly.

Or, oh jeez, what was she thinking?
There's a well-known sex/BDSM club with a relatively low skeeve factor in town and I've visited a couple times. I suppose I should join but I just never make the commitment. Partly because the median age is kind of "hi there, dad," but partly because I don't want a community. I like being a little furtive, a little unhealthy, a little freaky. Nothing ruins the illusion of being an outlaw like going to a "spanking enthusiasts social."
Not only is she being incredibly snobby about age (and not even correct about the demographics, as it turns out), but she's so dedicated to feeling like an "outlaw" that she won't deign to talk to her own community and get actual friends and allies who understand what she's doing. Is her little fantasy really more important than learning anything or connecting to anybody? Cripes.

And then there's this post where she really gets going:
Call me a rich white het cis privilegebunny, but I don't feel very oppressed. Sometimes insulted, sometimes worried, sometimes concerned for the oppression of people in other places, but in my own life I just don't feel the boot on my neck. At work, at school, socially, nobody acts like I'm less than human or tries to enforce the Patriarchy on me directly. For me, in my daily life, I don't feel like being female is difficult or painful.
I still have my issues with the concept of "privilege," but I don't just disdainfully make fun of it and then deny that there's any oppression of women as well. I mean, we've got the vote and everything, right? What more could you need once they let you vote?

Overall, though, there's less in the old entries that's "asshole," and more that's just "ouch":
Sometimes I think that if I were strong enough to say "I'm not seeing you unless you treat me well, and I'm not fucking you unless you treat me like a goddamn princess," my relationships would go a lot better. But the problem is that I'm so damn happy to be seeing/fucking the guys at all, I can't stand to withhold it for any reason.
It's incredibly clear that she knew from the beginning that Benny was treating her horribly. I thought there was a "honeymoon," some sort of time when the relationship was going well, but there really wasn't. The first entries about him make it clear that he's a huge jerk but at least he'll deign to fuck her. That she stuck with him for years until he actually assaulted her is... a major source of shame for me and frankly one of the reasons I'm hesitant to talk much about it. I don't think she "should have seen it coming"--who does?--but I think she should have long since dumped him for all the other reasons.

I can't believe she went and just threw this in as an embarrassed little parenthetical (well, I can, but I feel terrible for her):
(Benny, always happy to be on the worse side of any comparison, once actually fucked me against a "no," and not in scene or anything--we were just hanging out naked in bed and he got on me and I wasn't really ready and said so and he started anyway. Again, it was mere moments until things got sorted out, but... I could swear I was audible the first time, goddammit.)
Holy shit, past-Holly.

I'm not here to lick the wounds of my past. I'm here to marvel at just how much growth and change and learning is possible. I'm here because what I said here was my belief and no longer is:
I've been a little wary of feminism, because my initial exposure was way too academic and way too unrealistic. No, I don't feel that my life is unbearably suffused with phallic energy, and no, I don't believe that the world used to be a utopian matriarchy, and no, I don't think that having sex with boys--including nasty filthy sex, including sex on camera--is betraying the Sisters.
So I stand as living proof that people aren't lost causes if they don't agree with you, and they aren't lost causes if you try to teach them and they spit it back at you. Change is something that happens on a person's own schedule and not on yours, and often when they do change you won't even hear about it, but it happens. People really can learn.

I hope that what I'm writing now will embarrass the hell out of me in another four years.
Posted by Cliff Pervocracy at 7:18 AM