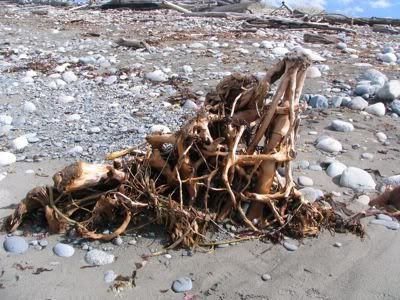 When I was in high school, they showed us a slideshow of various sexually transmitted infections. All of the pictures were outrageously gruesome and their sole purpose was to scare us out of having sex. Everything was red and swollen and dripping and crusted and ew--because sex is dirty and if you have sex you'll be dirty, kids! There was one in particular they called "Barnacle Bill." It was a penis covered in warts--warts upon warts upon warts until it didn't look like a penis anymore. Poor Bill was nothing but barnacles. We laughed but we also cringed. "Now who in this class thinks it's a good idea to have sex?"

The other day at work, I was leafing through a dermatology textbook. Right there, somewhere in "Infections and Infestations," was old Barnacle Bill! It was the very same picture. Except this time, it had a caption.

Human papillomavirus in an immunosuppressed patient. Patient suffered from dementia and was unaware of the progress of the infection.

Sometimes life is cruel for no good reason, and then after you're (probably) dead someone uses the most embarrassing picture imaginable of your body to lie to schoolkids and make them associate pleasure with filth.

I'm sorry, Barnacle Bill.
Posted by Cliff Pervocracy at 11:26 AM

Email ThisBlogThis!Share to TwitterShare to FacebookShare to Pinterest
Tags: memories