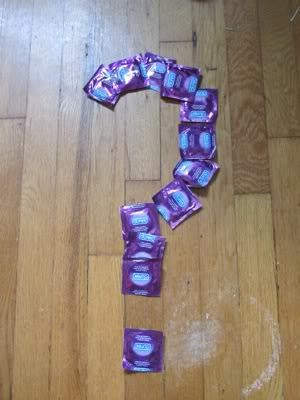 Here's another interesting statistic from my medical textbooks: the failure rate of condoms in preventing pregnancy is 2% (over a year) with perfect use. It's 10-18% with typical use.

Well, no. Condoms are 98% effective. The catch lies in the concept of "typical use" as opposed to "perfect use." It makes it sound like "perfect use" is some theoretical expert condom application, where the condom is applied with absolute precision by a team of professional condomifiers in a way that mere "typical" civilians could never replicate.

Nope. All "perfect use" means in the case of condoms is using them every time, and using them for the entire duration of PIV sex. There's a few more catches--you shouldn't reuse condoms, you should throw them away instead of turning them inside out if you put them on wrong the first time, you should use lube but nothing oil-based, and you shouldn't double-bag--but honestly, most of those are statistically minor. The biggest factor in "perfect use" of condoms is actually using them.

So what's "typical use"? Well, if someone says that condoms are their primary method of birth control, but only uses them sometimes, they're counted as a "typical" user. When they get pregnant, they go in that 18%. The number one cause of condom "failure" is not using a condom.

It's sort of amazing to me that people would use condoms only sometimes and expect that to work, but I know from work (we talk about condom use with STI and Pelvic Inflammatory Disease patients) that it's not uncommon. People don't have a condom handy and they go "aw fuck it," boyfriends complain that it doesn't feel as good for them, women try to do a kind of half-baked rhythm method only using condoms when they think they're fertile, people have sex drunk or high and forget about condoms, and some people really just seem to only use them when they feel like it.

In large part, this is an educational problem. We're sending two very dangerous messages in regards to condoms:

1) "Condoms are for dirty sluts." Hell, there's places where condom possession can be used as evidence of prostitution. There's long arguments about whether making condoms available in high schools--or even colleges!--will cause kids to have sex, which would be terrible because sex is dirty. Women's magazines run articles on how a guy will think you're a slut if you open up your bedstand and there's a lot of condoms. Many drugstores keep condoms behind locked doors to add even more awkwardness and embarrassment to the purchase. (I know this is often because of shoplifting, but in practice, it does increase the shame factor.)

When everyone is shamed for using condoms, and women are extra-shamed, then people are less likely to have them around when they have sex, and more likely to go ahead with it anyway.

2) "Condoms fail all the time." This one is enshrined and exaggerated in abstinence-only education, but not limited to it. I've had a doctor tell me that condoms alone aren't "really" birth control. Hell, until I did more reading, I believed this one myself. And of course condoms aren't perfect--but they're a lot better than I thought.

The problem with this one is that it encourages fatalism. If a condom doesn't really help, why bother? Might as well have unprotected sex and take your chances, since you're taking them anyway. Abstinence-only education has been repeatedly shown to discourage condom use, and this is one of the reasons--when they say "condoms don't work," they aren't telling kids "don't have sex, even with a condom." They're telling them "don't have sex with a condom."

In this way (and it affects adults too), the 18% statistic is feeding itself. The more people believe condoms don't work, the more often people who use condoms for birth control won't really use them. The more people feel like condoms are a crapshoot, the more comfortable they'll feel taking real crapshoots.

Condoms are great! They're cheap, completely confidential and anonymous, involve no hormones or other funny chemicals, require no prescription, and they work really really well. All you have to do is use them.
Posted by Cliff Pervocracy at 2:47 PM

Email ThisBlogThis!Share to TwitterShare to FacebookShare to Pinterest
Tags: bodytalk